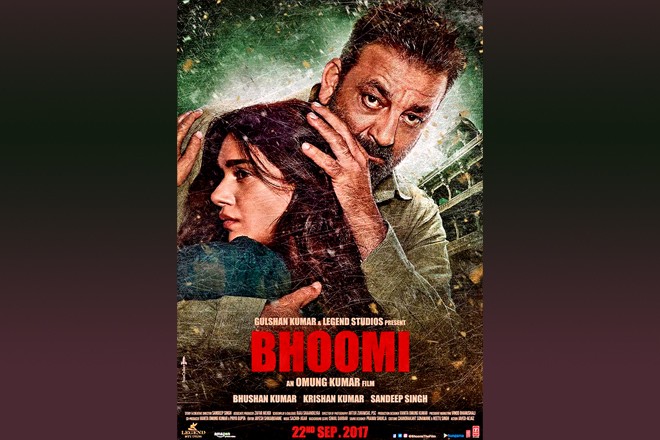 Sanjay Dutt makes his return to the big screen with Bhoomi and has taken the Amitabh Bachchan route to stretch his career as a leading man. In the film he plays the father of a rape victim, who takes revenge from those who were involved in the incident.

Director Omung Kumar seems to be riding high on the success of past films such as Mary Kom and Sarabjit while forgetting that a film is made for an audience and not just to gratify one’s inner artist.

Bhoomi is the story of a young rape victim (Aditi Rao Hydari) whose wedding is called off after she discloses the assault to her boyfriend. Since the rapists have the backing of a powerful figure, the court doesn’t charge them and Bhoomi’s reputation is dented. The father-daughter duo succeeds in getting proof of their involvement after a few months. They choose to take the vigilante path after careful planning. Whether they succeed or not is for you to find out.

It should also be stated that the reason why Bhoomi caught attention ahead of other films is because it marks Sanjay Dutt’s return to the big screen after three years. He does manage to continue from where he left off in PK and one hopes that he continues to do well in upcoming projects.

Aditi Rao Hydari also delivers a powerful performance, quite possibly her finest, but it is still unclear why she was stammering throughout the course of this film. Sharad Kelkar is one of the most dynamic actors working in India presently and he has given a solid performance as the main antagonist.

Yes, the film had a message for rapists but that came too late if you ask me as a viewer. Add to it the director’s incompetence and you have a film that didn’t have an appropriate interval, featured an inappropriate item song and delayed the first Sanjay Dutt punch in three years. All the powerful dialogues in the film were presented in the trailer which meant that there was no element of surprise in the actual film. Even without watching the film, one can predict just how the story will unravel and that was not expected from an award-winning director. Watch this film if you are a Sanjay Dutt fan.

Baadshaho is a heist film that caters to everyone. With an excellent ensemble cast, explosive stunts, powerful dialogues, the film is a throwback to the seventies.

With Ajay Devgn leading the cast and Milan Luthria steering things as director, you get a film that delivers a powerful punch despite lacking some elements here and there. The censored version screened in Pakistani cinemas also doesn’t help matters, particularly since the audience pays a huge sum for the ticket and wants to be fully entertained.

The synopsis of the film goes something like this: "An Indian queen asks her bodyguard to steal back gold taken from her by the Indian government during The Emergency period in 1975."

Ileana D’Cruz plays the fictional Geetanjali Devi while Ajay Devgn is cast as her bodyguard Bhawani Singh and Priyanshu Chatterjee is essaying the role of a politician called Sanjeev. Given the cat and mouse game that ensues between Devi and Sanjeev, others are forced to get involved.

Bhawani then assembles a team of four experts including a locksmith, a manager and a thief and plans to steal the ‘gold’ from an impenetrable truck that is guarded by an army officer who never fails. What happens next is the mystery that can only be solved by watching the film.

Some of the best moments in the film are jointly shared by Ajay Devgn and Emraan Hashmi as they exchange banter. Other supporting cast members such as Esha Gupta, Sanjay Mishra and Vidyut Jammwal fit their roles perfectly. Since the film is set in the 1970s, some in the audience might feel disconnected but take it as a period film and you will end up yearning for more.

Lucknow Central is not the best jailbreak film but within the context of Hindi cinema, it is one of the better efforts to emerge in recent years. The film smartly combines music and the scheme of prison break together which keeps one engaged as a viewer. It is a novel method of creating suspense, something most filmmakers avoid in this day and age.

Lucknow Central follows the usual theme: an innocent man is imprisoned in a maximum-security facility and plans to break out by befriending other prisoners.

However, a shrewd jailor (essayed by Ronit Roy) has his suspicions about what Kishan (Farhan Akhar) and his jail mates (Gippy Grewal, Deepak Dobriyal, Rajesh Sharma and Inaamulhaq) are planning. It is presented as a complication that they must address. However, the chance of escape does exist for this group of prisoners as a reporter (Diana Penty) turns up at the prison on the orders of the Chief Minister. Whether they stage a successful prison break or not is for the viewer to find out.

What is obvious is that the film is a Farhan Akhtar vehicle who owns the frame from the first scene to the last. The only exception to this rule is the magnificent Ronit Roy who manages to deliver a solid performance as the jailor. It was also good to see Rajesh Sharma in a substantial role and the same can be said for Gippy Grewal, Deepak Dobriyal and Inaamulhaq. Diana Penty is not used as eye candy but is integral to the story which is penned by Aseem Arora and Ranjit Tiwari. The dialogues are as good as they should be while the soundtrack is decent and has recall value. Director Ranjit Tiwari has drawn inspiration from several Hollywood films that have dealt with this subject and every now and then you get a glimpse, of past films like The Last Castle, Lock Up and Escape to Victory.

Omair Alavi is a freelance broadcast journalist and can be contacted at omair78@gmail.com