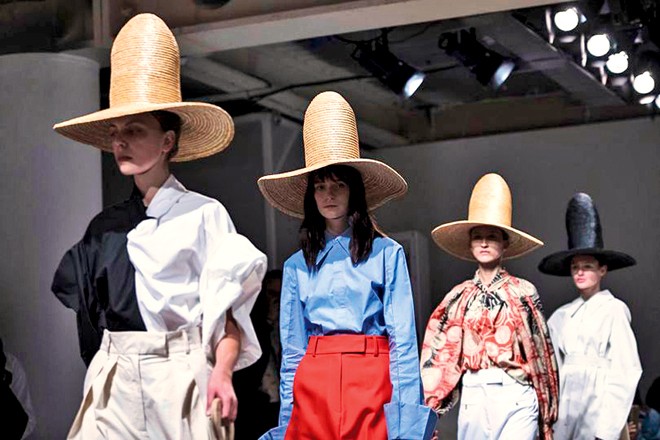 Pakistanis love weddings. And maybe that is why we have an innate inclination towards turning every soiree or event into a grand wedding-like setup. Think award shows, film premieres and fashion weeks and you’ll have the image of a wedding-type scenario floating in front of you. But let’s just focus on the fashion week for now.

Pakistan’s fledgling fashion scene that initially took off with four major fashion weeks - focusing more on creative brilliance and evolving the market’s fashion concept at the time - now includes an endless stream of annual bridal showcases, some credible and some very painful ones. Fashion Pakistan Council - that came into existence as one of the country’s two credible councils dedicated to push fashion forward, seemed rooted (at least initially) in promoting luxury pret until of course it too was bitten by the festive bug and changed it’s autumn/winter format to include more bridal wear. Now while it seems completely harmless to give designers a choice as to what market they want to target, the problem really is with the organisation and presentation of the event itself.

For years now, fashion weeks in Pakistan are held at a single venue - usually at hotels that attract a more international clientele and are relatively secure - over a course of three to four days. Like all quintessential ‘desi’ weddings, these too, start fashionably late, well after the sun has set. No concept of daylight savings here whatsoever. A bevy of so-called fashionistas - who either work as PR reps for the designers, are distant relatives or are bloggers, who normally lack the guts to criticize designers for their harrowing collections because their websites are in fact being funded by their promotional campaigns - flock to the proverbial red carpet to make it to the society pages. The rundown includes a mix of established and emerging designers sharing the same, rather bland runway, inundated with celebrity showstoppers, ending mostly around midnight. The whole deal has become almost mechanical.

My recent visit to the London Fashion Week, as part of an online publication’s special events team, proved to be quite the eye opener, showing me just how flawed the entire process in Pakistan is. To begin with, there is no red carpet at fashion week in London; there are queues - often long ones - across different venues within the city. And if it weren’t for LFW banners draped over buildings, you’d easily miss it for any regular festival. These venues range from resplendent churches and art galleries to some of the city’s exciting architectural wonders. The idea is to curate an entire show around a theme - that travels from the destination to the designs on the runway - and not the other way round. Talk about offering a true immersive experience to the audience.

What also make LFW locations conspicuous are the many style starlets on the street, who are then handpicked by photographers, asked to stand in either the middle of the lane or in front of Britain’s classic bricked walls, and pose. Only one simple rule is followed: you don’t have to be somebody to get photographed; you’ve just got to be fashion-savvy. And these aren’t women dressed for the altar in luxury labels but in chic high street casuals. These are women setting trends for the upcoming season, not following the herd. And amidst them are fashion eccentrics with peculiar headgears and quirky accessories making for every fashion week’s crazy statements (points to Ali Xeeshan for adding the flavour to our local fashion week).

This of course doesn’t mean you don’t get a photo op at all. If interested, you are more than welcome to pose on the ramp or in front of the label’s backdrop and have your company snap up a picture in the 15-20 minutes you get to settle down prior to the show.

Over to the shows. These begin as early as 9:00 in the morning because a fresh, early start to the day is life’s biggest hack. There are scheduled shows and off-scheduled ones, ticketed and invite-only and local as well as international presentations. It’s bound to be this way for it’s a £28 billion industry welcoming talent from across 70 countries. Labels may choose to make little effort and simply stage shows in corridors or pristine white catwalks, or may instead go for more elaborate set designs that are coherent with the message they want their collections to send across.

For instance, J.W. Anderson chose a circular runway this season with an art installation right at the heart of it all, depicting the intimacy of one’s comfort zone - the inspiration behind the collection. Burberry changed its typical venue for a flashier ambiance at Clerkenwell’s Old Sessions House while Irish designer Sharon Wauchob showed (off-schedule) inside the spectacular St. Cyprian’s Church.

Celebrities are usually spotted frowing instead of being a showpiece for the runway; from Kate Moss to Lewis Hamilton, these are people who make front-row fashion. Runways have models - all kindly of them: super models, emerging models, plus-size models, disabled models and more. The idea is to let the work speak for itself while still making an impact.

All settled and done, after five days of hotfooting from show to show, it all comes to a perfect end; onwards to Milan for the next celebration.

Now it would be completely unreasonable to compare the fashion weeks in Pakistan with those in London for the sheer mass and scale of LFW just cannot be matched by our – for the lack of a better word - ‘domesticated’ industry. But expecting it to follow international fashion norms and be up to par with world standards isn’t asking for too much; fashion weeks, after all, have been around for several years in both Lahore and Karachi. Why have a dozen designers show in claustrophobic ballrooms amidst glaring spotlights when they can choose from the splendor of heritage sites to intimate garden areas and explore their imagination? Lahore in fact is home to many of Pakistan’s hidden wonders. And Karachi, though struggling with hygiene, sanitation and security issues, isn’t so short of options either. Perhaps not making it a congregational affair may even minimize the security risks that come with it.

A more intelligent approach would be to separate the emerging lot from the established one, which, one believes is what the PFDC L’Oreal Bridal Week is doing this time. This division will allow the audience with a choice, leading to several serious developments. One, it will train upcoming designers the tricks of networking with media and buyers (albeit most buyers at local fashion weeks are individual patrons). It will train the press to deploy teams to various shows because after all, it’s fashion week and it is serious business. Thirdly, it will also open up a platform for more young talent to showcase their work because there are now more slots on offer. And it may even persuade the homegrown fashion mommies to step out of the comfort of their basements and/or verandah businesses and think bigger.  No harm in maybe planning a thematic festival around some of these talent-based shows and making it a ticketed event. Not only does that bring in revenue for the councils but also widens the designer’s reach for he or she will eventually be selling to the public.

Too late than never, a glimpse of some of these strategic changes was seen in both Lahore’s PSFW back in April and Karachi’s FPW more recently. PFDC introduced the concept of two show areas for alternating shows while the recently held FPW saw both Shamaeel as well as Sana Safinaz distance themselves from the regular lineup and show at more exclusive venues. A quick shift is needed to broaden the extent of Pakistan’s sartorial ambitions and concentrate on bigger goals.

Slowly yet surely, Pakistan’s fashion industry (with a focus on fashion weeks) is evolving but the progress is too sluggish. More needs to be done, and quickly, because the world of fashion is evolving at the speed of lightening. Pakistan is home to some exceptional talent; it’s city’s dripping with exquisite craftsmanship. But despite pitching to be a lucrative industry for several years now, it doesn’t have modern systems in place. It’s crying out loud for a strong strategy; one that coincides with international principles just like latest trends. Once that is sorted, the next step should be to start selling itself for what it’s worth. We are in need of some serious global branding. But more on that later…