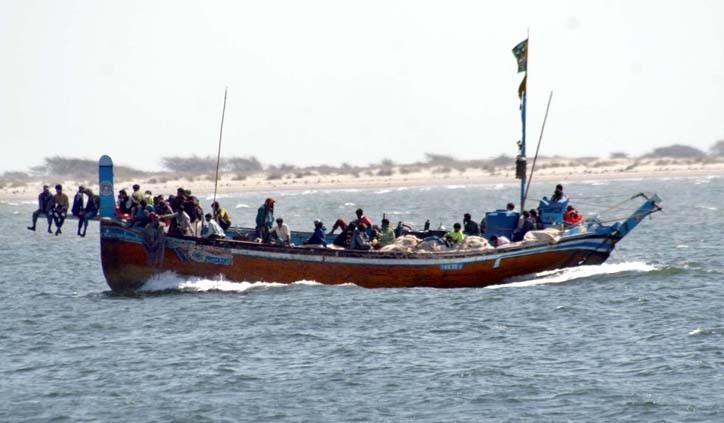 The resolution of Sir Creek dispute has been in jeopardy for long. India and Pakistan have a longstanding dispute over the 96-km long Sir Creek in Rann of Kutch. It divides Gujarat of India from Sindh in Pakistan, and is a major reason behind fishermen’s sufferings in both countries.

The coastguards and marine agencies of the two countries arrest and jail fishermen for violating territorial waters.

Pakistan Fisherfolk Forum (PFF), a Sindh-based non-government organisation working to improve and protect the livelihoods of fishermen, has revealed that within a few months’ period, around 66 Pakistani fishermen have been taken away by Indian forces and imprisoned in different jails of India.

"Both countries should form working groups which should consist of government officials as well as representatives of fishermen," Syed Muhammad Ali Shah suggests. "India has a working group with its neighbour Sri Lanka but there is no such group to resolve fishermen’s issues between India and Pakistan."

Fishermen of India and Pakistan are arrested often by maritime security agencies of both countries for violating each other’s waters. This is due to absence of any proper technology to confirm the coastline border between Pakistan and India near Sir Creek in the Arabian Sea. There are around 150 Pakistani fishermen who are in Indian jails while 352 Indian fishermen are jailed in Pakistan.

"My nephews, cousins, and sister-in-law were arrested," Yaqoob Chandani, a 50-year-old fisherman from Ibrahim Chandani village tells The News on Sunday. "None of the boats had global positioning system (GPS). We are small-scale fishermen and fish on small boats. GPS is out of our reach as most of us are not even aware of this technology."

GPS, a satellite navigation system, is used to find position on earth.

According to Sindh Fisheries Minister Mohammad Ali Malkani, "Large boats have navigation gadgets in order to locate themselves but smaller boats have no such latest equipment."

Chairman of the Pakistan Fisherfolk Forum Syed Muhammad Ali Shah says there are around 20,000 registered boats on Sindh’s coastline whereas 3,000 to 5,000 small boats are not registered. These boats are mostly from Sujawal and Badin districts.

"GPS is installed in almost every big boat for the last 10 years but most small boats, locally called hora, are without GPS. This technology helps in sharing advance information in case of rough sea. In case of emergency at land or in sea, it is also handy for communication," Shah maintains.

Fishermen who do not have access to technology face hardships in calculating the sea route and limits. Shah informs that "small boat usually cross the limits in search of a sizeable catch".

Muhammad Moazzam Khan, Technical Advisor on Marine Fisheries for World Wide Fund for Nature-Pakistan (WWF-Pakistan) and former Director-General of Marine Fisheries Department, endorses Shah’s view. He says "these are common fishing grounds for both Pakistani and Indian fishermen for decades, so they go after target of specific fish deliberately."

Jatin Desai, a Mumbai-based journalist and General Secretary of Pakistan-India People’s Forum for Peace and Democracy, is of the view that GPS is not the issue as most Indian boats are equipped with the system. The reason behind breaking the sea barriers can be attributed to the fact that they don’t find fish nearby.

"Fishing is the only source of income for poor fishermen of India and Pakistan as their livelihood solely depends on fishing," he says, adding that many times, gusty winds and heavy currents also take boats across the limits.

The Sindh government announced to pay Rs10,000 per month to the affected families of the fishermen arrested by Indian forces but that remains just an announcement.

"Both countries should form working groups which should consist of government officials as well as representatives of fishermen," Shah suggests. "India has a working group with its neighbour Sri Lanka but there is no such group to resolve fishermen’s issues between India and Pakistan."

"United Nations Convention on the Law of the Sea should be implemented and both governments should adopt speedy process to start nationality confirmation process after their arrests", says Shah.

Experts are of the view that both countries should adopt ‘No Arrest Policy’ for fishermen.

"If Pakistan realises that Indian fishermen are entering into their water, they can be pushed back into the Indian water. Similarly, Indian Coast Guard should do the same in case of Pakistani fishermen," Desai opines. "The other option is to have a ‘Free Fishing Zone’ for the traditional fishermen of India and Pakistan."