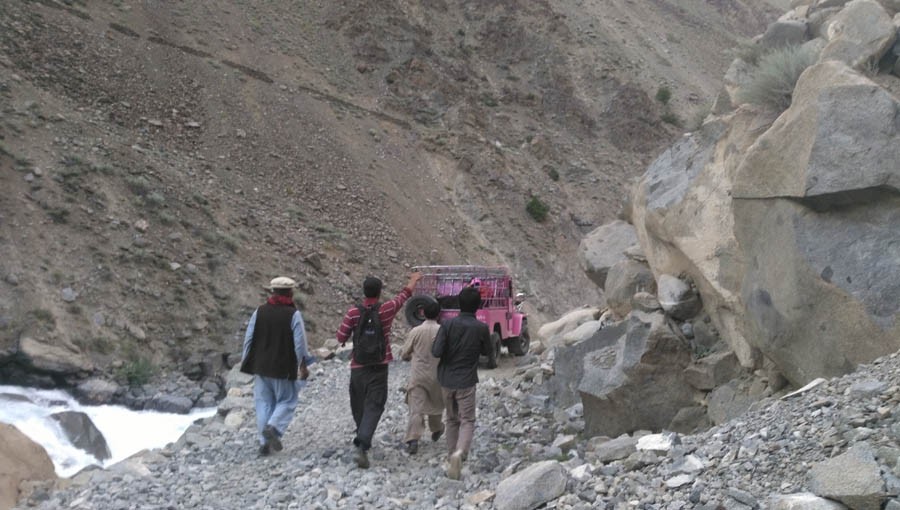 The first trek I ever attempted was the Everest Base Camp trek. I ended up getting stuck in Nepal because of the massive earthquake in 2015. I figured it was a one-off instance.

Fast forward two years, I spent most of the year planning and waiting for my chance to explore Gilgit Baltistan. People usually take a jeep to go see the Land of the Giants, Deosai Plains, but we - a group of nine university students, a professor, a few locals and porters, and a cook - were planning to trek all the way up.

We started from Sagarthang and did a short trek on the first day. After an amazing night of campfires and stargazing, and an early breakfast, we marched on. Unfortunately, just three hours into the trek, I was struck with food poisoning. Kazib Bhai, one of the porters, slowed his pace and walked with me to make sure I was fine, talking to me as I took short breaks to nibble on dried apricots and sip ORS. He kept me distracted by telling stories about his home in Sadpara, and how he mostly works as a guard for the Sadpara fisheries. He asked me about my braces, because he was considering getting them for two of his children. He told me how it was time for his eldest son to attend college and that that very day he was taking an exam for a scholarship to study in Karachi.

Kazib Bhai intuitively knew how to keep me comfortable by alternating between advice, instructions, and anecdotes.

The truck broke down. Everyone got out and while some attempted to repair it, I chatted to other passengers. An elderly man told me how he was surprised I was Punjabi because, according to him, all the Punjabi girls at Shangrila Resort walk for two steps and complain.

After we caught up with the rest of the group, which had stopped for a snack, I quickly fell behind again. Feeling weak and dizzy, I watched as my professor turned a corner and went out of sight. I slowly realised that it was time to turn back. And I did just that.

But the real adventure began thereafter.

My professor proposed I walked back with Kazib Bhai to a village we passed at the beginning of the trek. We were hoping on the off chance to catch a truck that visits the village once a week. Our backup plan was that we would walk for another hour to a lower village that may have a satellite phone to call a car with. If we were unlucky, we would have to spend the night in the lower village and walk for five hours the next day to Upper Kachura to get a lift.

After a seemingly endless trek down to the first village, we stopped at a local’s house to rest. We were generously given some namkeen chai and chapatti. Our hosts told Kazib Bhai that the village we had planned to go to did not have a phone and it was unlikely that the car would come that day. Even if a car did arrive, it would stop for the night and return the next morning.

I mentally prepared myself to get ready for the same experience I had in Nepal - not knowing where to stay, what to eat, and hoping that I wouldn’t fall even more ill.

Disheartened, we continued but as soon as we left the village our luck turned around. Kazib Bhai had spotted a pink truck in the distance! He haggled with the driver over the price. I could not help but laugh because I was willing to pay a lot to be back that day.

We paid a deposit and the driver agreed to drive us back after he dropped his passengers to another village. We waited for an hour for the truck, getting increasingly worried with every minute, until we saw a red truck go into the village we had just left and return a few minutes later. Kazib Bhai rushed to ask them to take us instead. The driver agreed but asked if he could stop at his relative’s house in the next village for tea as it was a tradition. Since my health had improved, I agreed. We only stopped for around 20 minutes - and as we were getting up to leave in the red truck, the pink truck appeared with more passengers.

The pink truck’s driver spotted us and started to fight with Kazib Bhai. He said that he wasn’t even planning on returning today but had agreed to do so just for us. Drawing a crowd of the local villagers to watch the argument, he insisted we go in his truck. Kazib Bhai gave in eventually and I was thrust in the front seat with the driver, another woman, and her child, while Kazib Bhai was in the back with the other men and a goat.

The driver spoke to me, and in the process revealed that he was not actually a driver. It was his first time seeing that road, let alone driving on it - which proved to be our downfall 45 minutes into the ride.

The truck broke down. Everyone got out and while some attempted to repair it, I chatted to other passengers. An elderly man told me how he was surprised I was Punjabi because, according to him, all the Punjabi girls at Shangrila Resort walk for two steps and complain. He even demonstrated this to me by taking two shaky steps and grabbing at his calves moaning. I was amused when he called me to look at what was happening with the truck, because, despite not even knowing how to drive a car, I was "educated" and he was not. I looked nevertheless and realised that the metal that connected the truck’s steering mechanism to the right front wheel had broken, so the driver could only turn left, which was also - conveniently - the side of the cliff that lead to a stream.

The driver decided to repair it by tying it back together with a rope, even though it was obvious that the metal needed to be welded. Kazib Bhai decided that walking a couple of hours to the next village would be less risky than taking the pink truck.

So we continued on foot.

The truck went ahead but soon broke down again. Kazib Bhai instructed me to continue walking while he helped the driver navigate and park the truck. He returned successful, but apparently had another spat with the driver by demanding our deposit back because the driver provoked him by having the audacity to request the remaining balance.

We were only half an hour from the next village when we saw the red truck approaching from behind us. It had picked up everyone from the pink truck including the driver.

It was so heart-warming to see friendly and familiar faces. They gladly rearranged themselves to fit us.

Once in Skardu, we hitchhiked till we could get a taxi home.

Although relieved by the familiar environment, I cannot wait for my next trek and all the ‘inconveniences’ that come along with it. Third time’s the charm, isn’t it?