Khusro Mumtaz
In the picture
September 17, 2017 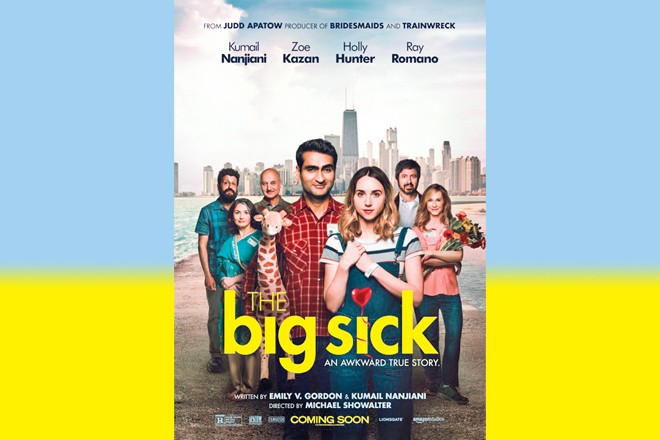 The Big Sick is based on Pakistani-American Kumail Nanjiani’s (Silicon Valley) real-life relationship with Emily V. Gordon (the two co-wrote the movie). It tells a lightly fictionalised story of their lives with Nanjiani (playing himself), an aspiring stand-up comedian, meeting and falling for charming grad student, Emily (Zoe Kazan). However, when cultural barriers arise – Kumail is reluctant to introduce Emily to his parents (Anupam Kher and Zenobia Shroff) who are intent on having him marry any one of a string of eligible Pakistani-American girls that are paraded before him - a bad breakup ensues. And then Emily falls sick. Really sick. And Kumail is faced not only with his guilt pangs but the possibility of losing something really precious to him – permanently. At the same time Kumail has to deal with Emily’s parents, Beth and Terry (Holly Hunter and Ray Romano), whom he’s never met before.

Despite its downer of a premise, The Big Sick ultimately offers an optimistic and harmonious world view (extremely important in this post-Trump world) where different cultures can not only meet but co-exist. However, the movie doesn’t beat us over the head with its messaging. All the characters come across as utterly human, including (and, perhaps, most importantly) the Pakistanis on the screen and the chuckles keep coming at a regular basis.

If I have one quibble with the movie it would be this - with the exception of Kumail himself, what’s with casting Indian actors in all the Pakistani roles?

Cut to chase: A timely and gently effective rom-com.

A former "AAA rated" security service agent Michael Bryce (Ryan Reynolds) whose reputation has lately taken a hit finds himself being called upon by his ex-girlfriend (Elodie Yung) for an assignment. He has to protect a professional assassin Darius Kincaid (Samuel L. Jackson) who has been asked to testify against an Eastern European dictator (Gary Oldman) accused of crimes against humanity. The two have to run a gauntlet across Europe to get to the Hague on time while the dictator’s henchmen aim to bring the duo down. Further complicating matters is that the two have a shared history as Bryce and Kincaid have often butted heads in the past. Will the two be able to overcome their differences and reach their intended destination on time? No prizes for guessing. The first 30 minutes or so of the movie give you exactly what you may expect with two motor-mouths such as Reynolds and Jackson headlining an action comedy. Their glib back-and-forth sprinkled liberally with a lot of m*****f***** this and m*****f***** that (courtesy mostly Jackson, who else) brings with it a certain sort of amusement. And SalmaHayek’s over-the-top turn as Jackson’s foul-mouthed, incarcerated spouse is entertaining too. But the movie soon descends into an endless series of violent, bloody chases across different locales and they all end up blurring into one another and bring with them interminable tedium. Bodyguard overstays its welcome by more than half its length.

Cut to chase: The charismatic leads can only take it so far.