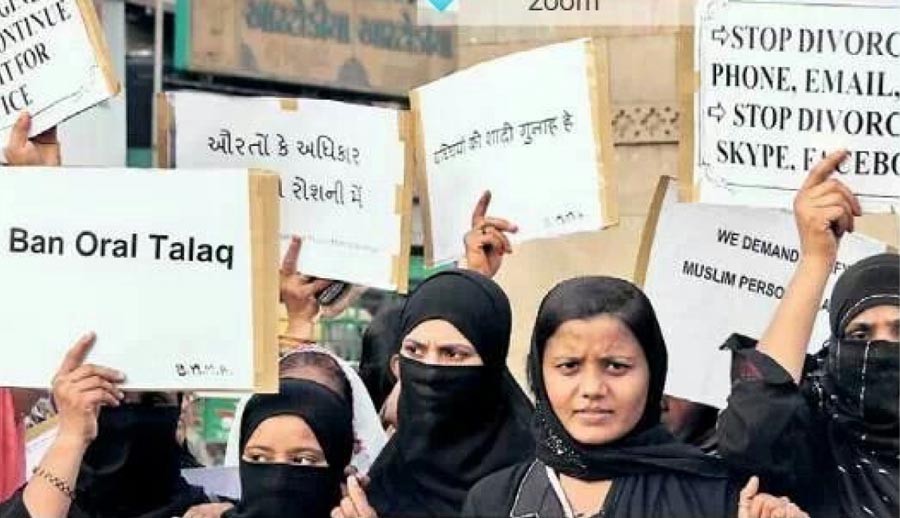 According to media reports, triple talaq (instant divorce by a husband) epitomises the misogyny of Indian Muslim husbands whose wives live under constant fear of being thrown out of their matrimonial homes after divorce. The Arabic expression for divorce -- talaq -- has become a word that ‘destroys lives’ of married Muslim women. Since Indian law-makers failed to limit the negative consequences of triple talaq upon Muslim women through legislative reform, all hopes were placed upon the judges of the Indian Supreme Court to salvage the rights of hapless Muslim women.

However, the recent judgment of the Indian Supreme Court, declaring triple talaq as unconstitutional, did not contribute anything significant. Over the past fifty years, various Indian judges, including many Muslims, have tried to subdue the "monstrosity" of triple talaq (Mohammed Haneefa v Pathummal Beevi 1972 KLT 514, per Justice Khalid). Indian Supreme Court judges have laid down the principle that a Muslim husband must have a "reasonable cause" to divorce his wife. Additionally, such divorce must also be preceded by reconciliation efforts by two arbiters, one from the side of each spouse, and must also be properly evidenced in the form of a formal declaration by the husband. (See Shamim Ara v State of UP AIR 2002 SC 3551; Iqbal Bano v State of UP AIR 2007 SC 2215).

The recent judgment of the Indian SC declaring triple talaq as unconstitutional, did not contribute anything significant. Over the past fifty years, various Indian judges, including many Muslims, have tried to subdue the "monstrosity" of triple talaq.

Earlier this year, Justice Muhammad Mustaque of the Kerala High Court, while declaring triple talaq as illegal, held that the right to divorce provided under Muslim law can be conferred on a court by divesting the spouses from this right (Nazeer v Sheemeema 2017 (2) KHC 18). Further, he held that it is possible to have a Uniform Civil Code without infringing on the right to religious identity. He supported his views by referring to the Islamic jurisprudential doctrine of maslaha (public good).

The above judgments show that the Indian judiciary had already resolved the legal controversy regarding triple talaq even before the recent judgment of the Indian Supreme Court. The Court gave the legislature six months "to consider legislation" regarding triple talaq. A bench of five judges, belonging to various religious communities, hoped and expected that "the contemplated legislation will also take into consideration advances in Muslim ‘personal law’ -- ‘Shariat’, as have been corrected by legislation the world over, even by theocratic Islamic States."

In their detailed judgment spreading over 395 pages, the judges of the Indian Supreme Court did not provide any guidelines to the legislature regarding the future legislation on triple talaq.

In this short piece, I present a legislative proposal on triple talaq suited to the Indian legal system by taking into account the applicable Muslim divorce laws in various countries.

In order to avoid the controversy of interfering with the substantive rules of Muslim personal law, Indian law-makers may consider the promulgation of a procedural law which will ensure that a divorce is preceded by a mandatory reconciliation. This is in accordance with the Qur’anic verse 4:35, "If ye fear a breach between them twain, appoint (two) arbiters, one from his family, and the other from hers; if they wish for peace, Allah will cause their reconciliation: For Allah hath full knowledge, and is acquainted with all things." Section 7 of the Muslim Family Laws Ordinance 1961 (MFLO), the applicable law in Pakistan and Bangladesh, envisages such reconciliation.

Indian law-makers may consider the promulgation of a similar provision by avoiding the pitfalls that reduced the intended benefits of this provision to women in Pakistan. Based on the analysis of Pakistani case law spreading over more than five decades, it appears that an absolute ban on triple talaq is likely to hurt women more that it protects them, by ensnaring them into a limping marriage where they stand religiously divorced but legally married.

For instance, consider a scenario where a Muslim husband divorced his wife through triple talaq. It is highly unlikely for a court to force such a husband to perform his matrimonial obligations towards his wife, despite the availability of the remedy of restitution of conjugal rights under Indian law. In such circumstances, the court can impose heavy financial costs upon a deviant husband. This may, however, not be very effective if the husband does not own property in his name.

In any case, despite the refusal of the Supreme Court to declare the remedy of restitution of conjugal rights as unconstitutional in the Smt. Saroj Rani case (AIR 1984 SC 1562), courts in many parts of the world have acknowledged the futility of forcing two adults to live together as a husband and a wife against their free will. Therefore, if a marriage is irretrievably broken down, it is better to allow the couple to separate amicably rather than force them to live a miserable life together.

In the Indian legal context, the main objective of the legislation on triple talaq should be to protect the rights of divorced wives over and above those rights that are already provided for under the Muslim Women (Protection of Rights on Divorce) Act, 1986. If a husband opts to exercise his right to divorce, he should be mandated to instantly pay the deferred dower and maintenance of the wife along with damages to compensate the innocent wife.

The law in Algeria, Egypt, Morocco and Tunisia envisages the payment of compensation to a divorced wife. At the same time, either the legislature or the courts may apply the concept of matrimonial property to provide divorced wives with a share in the husband’s property accumulated during the pendency of the marriage, taking into account her contribution in performing household chores and taking care of the family. This principle is applied in Malaysia and Iran.

From a procedural perspective, the second schedule of Sri Lanka’s Muslim Marriage and Divorce Act, 1951 provides the best model for the much-needed Indian legislation on triple talaq. This is because unlike section 7 of the MFLO, Sri Lankan law requires a Muslim husband to give notice of his intention to divorce to a judge. It is only after the failure of reconciliation that a husband is legally allowed to pronounce divorce in the presence of a judge and two witnesses. Not only is this procedure in conformity with the Qur’anic injunctions, it also avoids the legal complexities regarding a husband’s failure to give notice under section 7 of the MFLO, and it adversely affects the rights of the wife.

There is yet another aspect of Muslim divorce law in India that requires the attention of the judiciary and the legislature. This entails women’s right to no-fault divorce (khula). Unlike Pakistan and a number of Arab countries (eg Egypt, Jordan, Qatar, Libya and UAE), which provide Muslim wives with a unilateral right to a no-fault divorce, Indian law still requires the consent of the husband for a wife’s initiated no-fault divorce (khula). This legal principle is based on the Privy Council judgment delivered 150 years ago in the Buzloor Ruheem case.

Astonishingly, any discourse on Muslim women’s right to divorce in India is absent from the public and judicial forums. This is because a liberal regime for divorce is doctrinally incompatible with the personal laws of the Hindu majority, and the Christian and Parsi minorities in India. Yet, the non-recognition or absence of the no-fault divorce from other religious personal laws should not be a justification for depriving Indian Muslim women of their right to a no-fault divorce available under Islamic law.

Whether the Indian Parliament will be able to legislate on triple talaq within the next six months as directed by the Supreme Court is difficult to predict. This is because this issue is related to the unresolved political controversy regarding the role of Muslim Personal Law in the Indian legal system, and the question of who has the authority to speak for, interpret, and reform Muslim Personal Law.