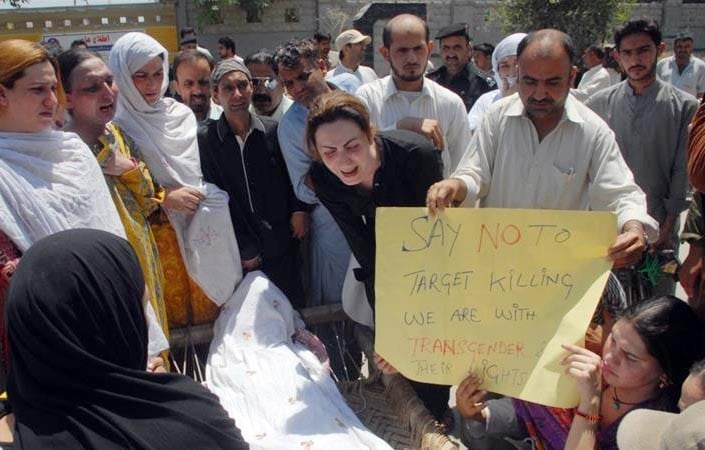 It had become a perverse night-time hobby: a white double-cabin vehicle with a security guard at the back would screech up to the side of the street, dispersing the khwaja sara at the traffic signal; a black-tinted window would roll down, eggs would hurl out. When 28-year-old Chanda Sharmeeli retaliated, on the night of August 29, cursing the car’s occupants, a bullet flew out instead. She died in the early hours of the morning. Police at the time described it as a personal argument gone too far.

There were three witnesses to the murder, which took place in Karachi’s upscale Shahbaz commercial area. They are all colleagues of Chanda who were at the traffic signal with her. They were persuaded to record their statements, but have since fled to their ancestral villages, terrified of being targeted for their cooperation with the police, says Ihsan Ali, provincial coordinator of the Sindh Transgender Network (STN). Surveillance cameras could not capture the license registration number of the vehicle -- it was dark and hazy -- but Rana Latif, investigating officer at Darakhshan police station, where the FIR was registered, says CCTV footage indicates that a car matching the description was seen in the nearby streets of Khayaban-e-Seher and entered one of the houses there. "We will crack this case, God willing, in two days," he told The News on Sunday on Wednesday.

August has been a particularly a bleak month for Karachi’s transgender community, says Ali, whose advocacy group, STN, began operating early last year. "In the same week as Chanda’s murder, in Makhdoom Colony, five men from the neighbourhood barged into a residence late at night and raped two transgender women and physically assaulted two others," he says. "An FIR was not registered -- khwaja sara face great difficulty in finding rented accommodation, and are consequently wary of ruffling too many feathers," he says. An agreement was reached between the parties involved.

In Korangi, a transgender woman was beaten by her landlord, he says, and in a separate incident, a transgender woman named Payal, returning from performing at a wedding -- one of the primary sources of income for the community -- had her mobile phone snatched by Shera, a man apparently notorious for harassing khwaja sara. "He forces them to imbibe alcohol, and chops off their hair," says Ali. "On the night of August 30", he says, "roughly 60 to 70 khwaja sara protested outside the Nazimabad police station to ensure that Shera remained behind bars -- a rare, if tenuous, victory."

Provisional results from the census indicate that some 10,418 people identify themselves as transgender in Pakistan. According to Health Ministry estimate in 2015, the number is closer to 150,000, but Bindia Rana, head of Gender Interactive Alliance and an influential voice in the transgender community, estimates roughly 300,000 khwaja sara in the country, and 16,000 to 17,000 in Sindh alone. "One reason for the glaring discrepancy is that many are still categorised as male on their identity cards; others were not present when census officials visited their neighbourhoods, and were consequently omitted," she says.

In 2009, Pakistan became one of the first countries in the world to legally recognise a third gender, with the court further directing the government to create "respectable jobs" for members of the community. In June this year, a third-gender passport was issued for the first time to a transgender activist from Peshawar. But discrimination remains rife, says Ali -- "on every street, at every junction. We weren’t even aware of the extent of harassment at Shahbaz commercial area until the murder took place."

"Had the 2009 ruling by the Supreme Court that gave khawajasara the right to elect their representative been properly implemented, Chanda wouldn’t have been out at night begging at a traffic signal in the first place," says Rana.