Can a legal regime that allows for long-term detention, constitutional immunity and impunity for past disappearances provide a way forward? 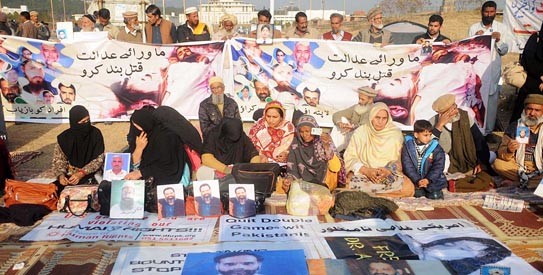 There are few problems that challenge the integrity of the Pakistani state as seriously as the enforced disappearances.

Hundreds of court proceedings post-9/11 and the information provided and data released by different (civilian) official commissions confirm that the national security institutions have adopted enforced disappearances as a long term measure for ‘national security’/counter-terrorism strategy.

Is there a way out of this huge national problem? Can a legal regime based on long term detention mainly at the hands of the executive/state security apparatus, and constitutional immunity and impunity for past disappearances, as argued by some, provide a way forward? Consider the following.

It may be relevant to mention at the outset that ‘enforced disappearance’ is a term of international law (the Pakistani law recognises no such term). It occurs when state agents or anyone acting on its behalf abduct, arrest or detain an individual followed by a refusal to disclose the person’s fate or whereabouts or acknowledge their deprivation of liberty, which places such individuals outside the protection of the law.

The periodic data released by the COIED (there are other sources of information as well) shows that the total complaints received up to August 31, 2017 stood at 4271 out of which the commission claims to have ‘disposed’ 2899 complaints. Probably, we would never be able to confirm the accurate number of persons who were forced to disappear for months and years. The outstanding complaints before COIED are put at 1372.

As revealed in a number of court proceedings since the setting up of military courts, a large number of detainees held incommunicado, including those who were made to involuntarily disappear in previous years from various places across Pakistan, are believed to have been shifted to several internment centres established under this Regulation.

Enforced disappearances have been adopted as a strategic tool as opposed to a mere short term tactic. This is supported by the fact that in several legislative measures introduced at the behest of the national security institutions, the focus has been to provide ‘legal’ cover rather than prohibit and criminalise the practice as required under the constitutional framework and international law. Foremost among such legislative measures is the Actions in Aid of Civil Power Regulation 2011, the Protection of Pakistan Act 2013 which stands expired, and amendments to the constitution and the Army Act 1952 to establish military courts. The resistance to wholly abolish the Frontier Crimes Regulation 1901 may also be seen as part of the larger national security scheme.

These new instruments of oppression were enacted despite the fact that Pakistan already has a range of laws which allow for short term to long term administrative detention, preventive or otherwise, without judicial or parliamentary oversight. The foremost is the much used Security of Pakistan Act 1952. Others include the Maintenance of Public Order Ordinance 1962 and the Anti-Terrorism Act 1997.

One of the main differences between the old laws and the ones introduced since 2011 is that the former didn’t grant the armed forces, including its intelligence agencies and the civil armed forces such as the Pakistan Rangers and the Frontier Corps routinely accused of enforcing disappearances, the power to detain ‘anti-national’ suspects without recourse to the police.

By all accounts, the problem of enforced disappearances had assumed immense significance by the year 2008. It was around that year that the realisation of the enormity of the issue of illegality, unconstitutionality and serious negative consequences of the practice for officers dawned upon the authorities. It was in that context that the Actions in Aid of Civil Power Regulation 2011, a presidential decree, was issued under article 247.

Article 247 is a constitutional anomaly. It makes a black hole of the tribal areas. It grants the president power to frame laws for the tribal areas; two, it ousts the jurisdiction of high courts and the Supreme Court over the tribal areas, which makes enforcement of fundamental rights through judicial means almost impossible.

If it were not for article 247, the Frontier Crimes Regulation 1901 would not exist. It was used in this context only to circumvent constitutional guarantees of freedom from arbitrary detention and the right to be informed of reasons for arrest and be defended by a legal practitioner.

Read also: “To peep into the ‘black hole’, we need freedom to speak up”

Wrapped in human rights jargon, the 2011 Regulation does some significant things. For instance, it prohibits torture and provides that after gathering evidence the detained suspect may be prosecuted. But it’s a cunning piece of legislation nonetheless for the following reasons, among others. One, it provides a legal cover to the ‘actions in aid of civil power’ initiated by the federal government by calling in armed and civil armed forces in the tribal areas. (This is an Article 245 requirement) This cover is provided retrospectively since February 2008. All actions taken since then suddenly became ‘legal’. Two, it gives the armed forces the power to arrest and detain anyone for an indefinite period of time. For this purpose, the Regulation also allows the armed forces to establish and administer internment centres with civilian oversight only in word. Three, while it was ostensibly made to apply to the tribal areas only, it is so crafted that it seems to also apply to all parts of Pakistan because it allows internment of any person who may be anywhere in Pakistan and is suspected of having committed acts or has nexus with cognizable actions or suspects in the tribal areas.

As revealed in a number of court proceedings since the setting up of military courts, a large number of detainees held incommunicado, including those who were made to involuntarily disappear in previous years from various places across Pakistan, are believed to have been shifted to several internment centres established under this Regulation. A black hole within a black hole, one might say.

Despite all this, enforced disappearances even if covered under the 2011 Regulation are still likely to be taken notice of by the high courts and the Supreme Court as a host of verdicts have held. Even though the judiciary has failed to perform its duty, the threat of possible action by the courts against state agents who have perpetrated enforced disappearances remains.

It is in this context that some legal minds argue for a more ‘flexible’ long term detention regime under the control of executive authorities and a constitutional amendment to grant immunity from prosecution for full disclosure for past enforced disappearances, in the hope of prosecution of offending state agents for their future conduct. Similar proposals are also said to have been recommended by an official Task Force on Missing Persons in 2013.

Will a legal regime providing for long term detention and impunity for past conduct solve the problem? We don’t know. The figures released by the COIED (presented here in the table) show the consistency with which complaints of disappearances continue to arise round the year. One may therefore argue that if the state agents involved in such crimes had such intention, would we not see a clear sign of decline in disappearances?

Only one thing can be said with confidence: such a solution is not likely to diminish the possibility of black holes appearing in the hearts and minds of the people.