Khusro Mumtaz
In the picture
September 2, 2017 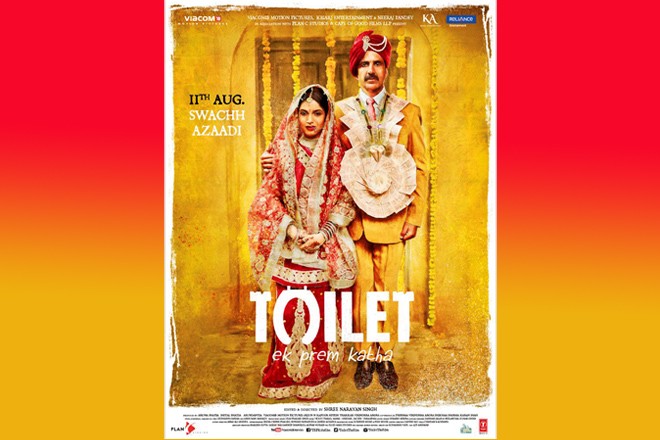 The first half of Toilet: Ek Prem Katha (inspired by a true story) is a pleasant enough romantic comedy about older bachelor Keshav (Akshay Kumar) aiming to woo younger, independent-minded Jaya (Bhumi Pednekar of Dum Laga Kar Haisha fame) in small-town India. Among the hurdles the couple have to cross are the superstitions held by Keshav’s religious-minded father (Sudhir Pandey). But the real problems begin after the wedding when Jaya discovers that Keshav’s house doesn’t have an attached toilet. And this is when the movie turns problematic too as it turns into one long, repetitive diatribe against India’s huge problem of public defecations. It’s a good cause but that doesn’t necessarily make for a good movie. Maybe if 30-45 five minutes had been chopped off from the film we could have had something.

Cut to chase: A polemic disguised as a movie.

Based on the international bestseller The Ingredients Of Love by Nicolas Barreau and riffing off of Cyrano De Bergerac, Bareilly Ki Barfi aims to be a modern-day Basu Chatterjee film - sweet, real, heart-warming - but never really succeeds. Bitti (Kriti Sanon) is an atypical (she smokes, drinks, and refuses to be the virginal archetype for prospective suitors) small-town girl in UP India. She’s practically given up on romance when she comes across a novelette which seems to be all about her. Fascinated, she sets out to find the author who appears to know her so well. Problem is the purported author, Pritam Vidrohi (Rakkummar Rao) isn’t really the man behind the words. It’s actually Chirag Dubey (Ayushmann Khurana). So will Chirag win Bitti’s heart? No prizes for guessing.

The movie’s sweet but its predictability as well as the overly long and improbable script hurts the final product. Still, Rajkummar Rao is excellent in both his avatars as the simple Pritam and the roguish one and the Pankaj Tripathi and Seema Pahwa almost steal the movie as Bitti’s concerned parents.

Cut to chase: Sweet but too long and utterly predictable.

Set in China during the Song Dynasty period (960-1279), The Great Wall has two western mercenaries (Matt Damon and Pedro Pascal) seeking the secret of gun powder and getting caught up in a war that has been going on for centuries between brave Chinese soldiers and vicious monsters (something of a cross between komodo dragons and the xenomorphs from the Alien movies).

The great Chinese director Zhang Yimou (Raise The Red Lantern, Jo Dou, House Of Flying Daggers) uses his spectacular imagination and flair (and massive budget) to bring to the big screen some magnificent, breathtaking visuals in this historical, action-fantasy. But the characters get lost in the sound and fury and kaleidoscope of colours and superbly choreographed action scenes (the CGI on the monsters, however, is a bit dodgy). The chemistry never really works between either Damon and Pascal or Damon and the fetching Tian Jing, the leader of the female contingent guarding the wall. And if you don’t care about the characters you’re not really going to care about their fate.

Cut to chase: The characters get lost in the great visuals.