Blessings and bane that come with rain 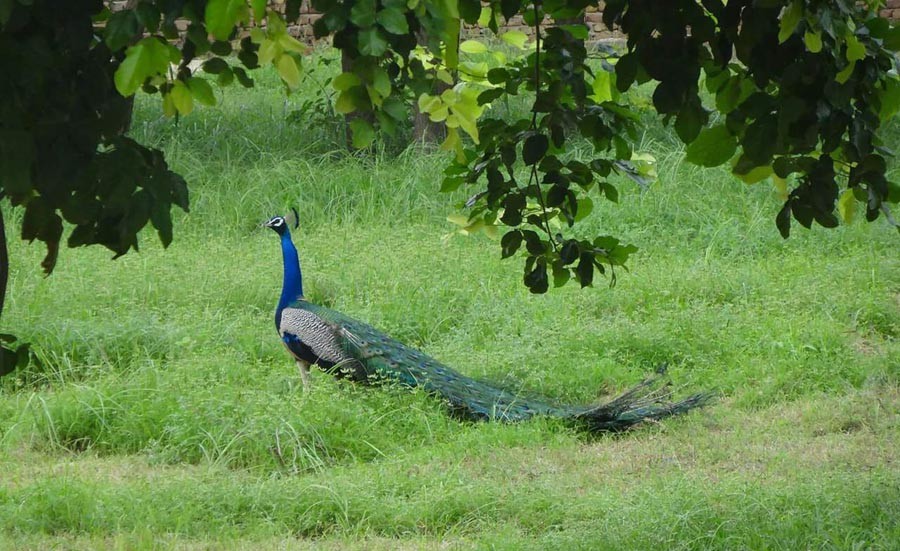 Sindh’s Thar Desert has witnessed severe drought in the past four years. The long dry spell caused acute shortage -- of food for humans, fodder for livestock and water for wildlife. During this worst drought in the recent history, hundreds of infants have died of malnutrition. The famine like situation has killed not just livestock, an important source of livelihood, but also wild species.

But the recent monsoon rains had a magical effect on the desert which has turned green from brown, promising good times ahead not just for humans but wildlife as well.

At the same time poaching and trafficking of baby wild animals including peafowl, deer, partridge and wild rabbit in the region is picking up. Thar Desert is home to around 300 species of mammals, birds and reptiles.

Prolonged drought had impacted the economy, society and environment of Thar Desert. Natural water ponds (locally known as Tarae) dried up and ground water level deepened, affecting all forms of life. There was no cultivation. Green pastures, which are the main source of food for livestock and wildlife, had depleted. Locals would spend most of their time in search of food and water. In the drought years, almost half of the total population of locals migrated along with their cattle to the neighbouring barrage areas in search of food. So did the wildlife species.

Sindh Wildlife Department denied any involvement in facilitating hunting and poaching. However, officials admit that there may be cases that have gone unreported.

Although last year there were some rains in the desert they were not on time, hence not beneficial for locals as they could not cultivate crop due to delayed rains. Also, there was no greenery.

This year monsoon arrived on time. The desert received the first rain in the beginning of July that continued for several days, restoring the beauty of the desert.

Rain has provided the much-awaited relief to the living beings and natural habitat. Thar Desert is recovering from the bad impacts of drought. Wetter Thar means greenery and pastures all around as this part is considered the most fertile desert. There is greenery on vast areas of sand dunes locally called ‘Bhit’. That also means better food supply to flora and fauna of the area.

Much of Thar Desert’s portion lies in Tharparkar district of Sindh, stretching over 22,000 square kilometres. 300 kilometres east of Karachi, along Indian border, it has faced persistent but periodic droughts for the past several decades.

Thar Desert’s habitat depends on monsoon as it is the main source of water in the desert. During monsoon the breeding of the local wild species increases as food becomes available for the wildlife species. On the other hand birth rate remains low during drought as animals are not physically able to deliver babies. Number of termination of pregnancies remains high during drought due to non-availability of food. A weak mother cannot give birth.

The rainfall brings with it grass, breeding and mating season for several species of mammals, birds and reptiles. Monsoon is the breeding season of peacocks, wild rabbits, partridge, ‘Baataybar’ and Neelgai.

Spawning of wildlife in monsoon also means increase in number of poaching and trafficking cases of fawns, baby peacocks and its eggs, baby deer and partridge despite ban.

In early August this year, Sindh Wildlife Department recovered pair of fawns from a village of Kaloi town and registered an FOR (first offence report) against one person. According to officials, the pair was to be smuggled to Karachi.

Dwellers of Malsiryo Mir Muhammad village, a settlement around 45 kilometres from Nagarparkar, foiled a poaching attempt of rabbits a few weeks ago. The village is home to 1,000 peacocks and 500 rabbits. "Some people from neighbouring village were trying to catch the species but were caught red-handed. We freed rabbits and destroyed hunters’ net by setting fire so that the net couldn’t be used again," said Nashad Samoon, a dweller.

Poaching needs to be checked because it affects the ecology. "Take for example peacock. Monsoon is the breeding season of peacocks and with it of poaching and its secret smuggling. A peacock eats small snakes. Snakes eat rats. Rats eat grass. So if you disturb one, you disturb the whole chain of the ecology," says Amrani.

During last five years, Sindh Wildlife Department lodged 66 FORs (first offence report) in Tharparkar district alone. Similarly, there were fines of around Rs800,000 in different cases during the same period. These cases were of various types including trapping, poaching and smuggling of wildlife.

Local ecologists and environmentalists like Bharmumal Amrani say statistics provided by Sindh Wildlife Department may not reflect the actual number of cases of hunting and trafficking in the area which may be much high. For instance, during the ongoing monsoon there are regular incidents of poaching of peacock eggs but that number does not reflect in official list.

"Some cases get reported and caught by Wildlife officials, others do not get reported because of being in far-flung areas. The department’s officials can’t reach every single case in the vast area full of sand dunes and rocky hills. However, in some cases, locals blame that authorities are themselves involved in facilitating influential people in hunting, to appease them," says Amrani.

Sindh Wildlife Department denied any involvement in facilitating hunting and poaching. However, officials admit that there may be cases that have gone unreported. In conversation with this scribe, Saeed Baloch, Sindh Wildlife Conservator, said that the department lacked resources to deal with every poaching case.

"Despite limited resources, Sindh Wildlife Department is doing its best to control hunting and poaching and we have been successful in reducing such cases. It is a daunting task for us due to the vast area with scattered population," he said.

"We lack resources. The department is deficient in trained staff in remote areas and is short of check posts. Mobility of the staff is also an issue," he admits.

Poaching needs to be checked because it affects the ecology. "Take for example peacock. Monsoon is the breeding season of peacocks and with it of poaching and its secret smuggling. A peacock eats small snakes. Snakes eat rats. Rats eat grass. So if you disturb one, you disturb the whole chain of the Tharparkar’s ecology," says Amrani.

Similarly, he admits that there may be some cases of deer hunting mostly in bordering villages. He clarified that whenever a case comes to his department’s knowledge, a swift action is taken.

"In the days when media is so vibrant, cases cannot be hidden. Over the years hunting, poaching and trafficking has declined," he says.

Baloch’s department figures negate his statement and reveal that hunting continues with slight changes during the last five years.

According to Ashfaque Ahmed Memon, Tharparkar game officer, every check post is sealed to discourage poaching, but at the same time admits having loopholes in the surveillance mechanism.

"Take an example of Nagarparkar where there is a traffic load of around 10,000 vehicles that enter and leave Nagarparkar on daily basis. At times it becomes difficult to check every vehicle," says Memon.

Sindh Wildlife Department does not have any statistics regarding the very rich wildlife district. On inquiring about the statistics, the department suggested and referred to some non-profit organisations and studies of some other organisations to get the estimated numbers.

A 2015 study "Mammalian Diversity in Thar Desert Habitat of Tharparkar District, Sindh, Pakistan", says that there are thirty five species of mammals alone in Thar Desert.

Similarly, IUCN Red List of Threatened Species (2015) shows that two species of the recorded mammals of the surveyed area (Asiatic wild ass and Indian pangolin) were endangered, one specie (Striped hyena) was near extinction, 30 species had least concern status whereas two species have not been evaluated for IUCN Red List.

Another study confirms the presence of 141 bird species in Thar Desert including the great Indian bustard, tawny eagle, and Laggar Falcon.

In 1997, Sindh Wildlife Department, under its survey, found Tharparkar suitable to be declared as a National Park but 20 years have passed and the matter is still pending. Similarly, the government could not make Chinkara Wildlife Sanctuary functional. The sanctuary, established between Mithi and Chelhar towns last year, would be an addition to conservation reserves in the region that already has Nara Desert Wildlife Sanctuary and the Rann of Kutch Wildlife Sanctuary.

Amrani urges the government to declare Tharparkar a National Park and make Chinkara Wildlife Sanctuary functional at the earliest. "The government should start management of wildlife sanctuaries and Karoonjhar Hills should be declared a national park. It will help protect wildlife and natural environment and habitat of the region."

"Wildlife animals are priceless creature of nature. Having said that, market value of the species depends upon the interest of the buyer. For instance the value of peacock could range in hundreds of thousands of rupees. Similarly, a pair of fawn could sell for Rs50,000."

Tharparkar is prone to regular droughts. It is not only killing children but wildlife also battles for survival. In this scenario, poaching and trafficking lead to extinction of the habitat. "There was a time when deer and wild rabbits used to roam around in the human settlement just like domestic animals. Nowadays, ask a twenty-year old boy of Mithi town if he has seen a deer alive. He may have seen it on television or heard in tales. Same is the case with rabbit which is on the verge of extinction. Tharparkar’s ecology cannot survive if illegal trade continues," Amrani adds.

Increase in poaching during monsoon could be linked to visitors who come to Thar Desert for recreation. While returning they take away these species with them either for themselves or their relatives and friends as wildlife souvenirs. For example, poaching and trafficking of wild rabbit is for many purposes. It can be kept as pet because it is beautiful or eaten as its meat is delicious.

Poaching and trafficking is considered a status symbol. It portrays how much local links they have. People’s show of power and souvenirs’ presentation comes at a price the area pays in terms of ecology.

Routes of the illegal trade are no different as normal exit routes from Tharparkar which could be via Badin, Naukot and Chachhro. It can be controlled if authorities take interest.

"The important species found in Thar region are peafowl, vultures, blue bull, black deer, hyenas, common gazelle, Indian wild ass, Indian pangolin, grey and black partridge and ibex. These are species unique to this region," Nadeem Mirbahar, an entomologist and expert at International Union for Conservation of Nature (IUCN) who has worked in the area, tells TNS.

According to Mirbahar, crocodile and otter population is also found in dry-land region. The migratory species in Thar region include sirus crane, houbara bustard, great Indian bustard and saker falcon.

Though, rains have restored the life in Thar Desert, if authorities do not control the wildlife trafficking, it will be a disaster in near future.

Blessings and bane that come with rain