Our relationship with trees is disharmonious. We simply have no understanding of what trees do for us, for the environment and for global ecology on the whole 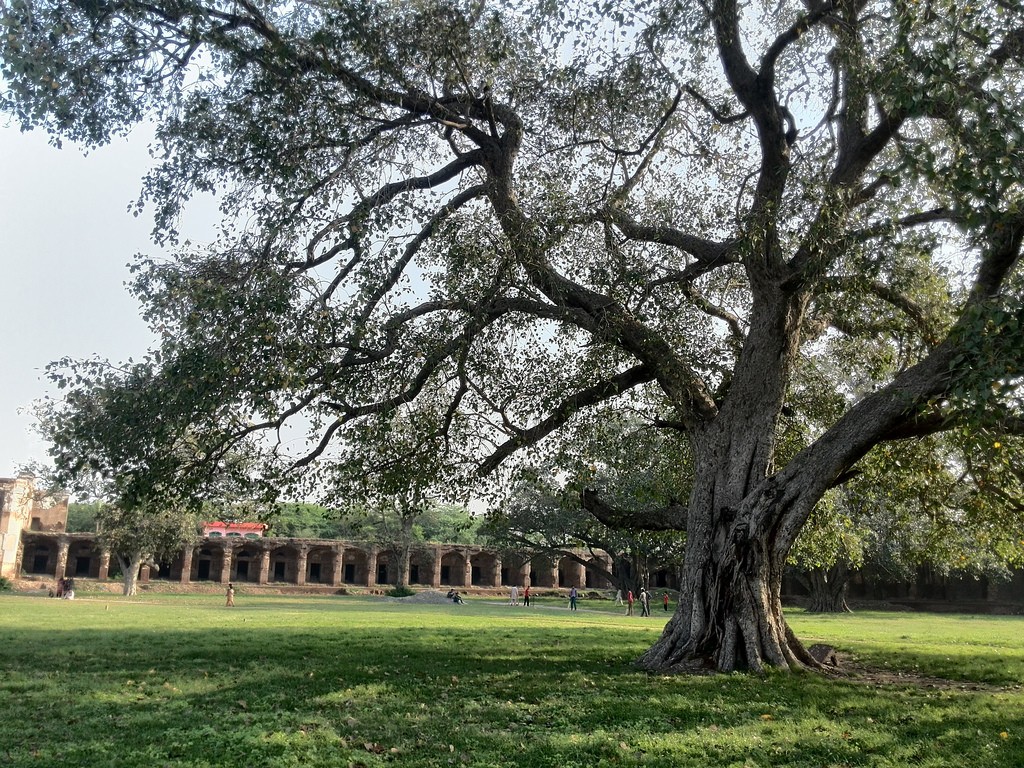 Our relationship with trees is disharmonious. We simply have no understanding of what trees do for us, for the environment and for global ecology on the whole. And then trees are divided between Hindu and Muslim trees. Either that, or some trees are paindu -- uncool -- and others not.

A few years ago, a bright, educated young woman in Karachi asked to be advised on which tree to plant in her family’s garden.

She heard the word sohanjna (Moringa oleifera) and blurted out, ‘But that’s a Hindu tree!’ This was not the first time I had heard this silliness. The pipal, it has been said, is also a Hindu tree. And then I have been told by a friend that his brother, upon hearing we had a pipal tree in our garden remarked, ‘What a paindu tree to have!’

Talking to young people shows that they believe only imported trees are cool and untainted by Hinduism. It also shows that it is a rare young person who knows the value of trees as carbon sinks: that the larger the bio-mass of a tree, the greater the amount of carbon it can sequester. And that capturing of atmospheric carbon is the only way to curb global warming.

But one cannot blame only young people. In years of talking to older persons, even the elderly, supposed repositories of wisdom, I have discovered that we are as a nation afflicted by a collective inferiority complex. There is a fervent desire to disown the indigenous in favour of the imported. This particularly colours the thinking of rural people migrating to the cities. Cramming their properties with imported flora is the way for rural immigrants to show they are ‘with it’; their way of shedding their paindu-ness.

Conocarpus is double whammy. It is as thirsty as the eucalyptus and to make matters worse, it is more allergy-causing than Islamabad’s paper mulberry. Dubai learned its lesson quickly from the sewage lines damaged by conocarpus roots and from increased cases of hay fever and asthma.

Even elderly persons I interviewed over the years have no idea that by this line of thinking they are blighting this land with alien species. To suggest local trees is to earn their scorn. For them a tree is a tree and the foreign is always preferred over the local. That by altering our flora we have banished the birds is simply of no consequence. They do not realise nor does it matter to them that by cutting down all indigenous trees to replace them with shrubbery and useless trees we have deprived ourselves of bird song. And perish the notion that ecological and environmental damage should enter their minds.

If common people are ignorant, general duty babus masquerading as horticulturists are greater culprits. Beginning in 1991, they started to change the landscape of Punjabi cities to please their ignorant and foolish political masters who, in turn, are beholden to Arab demi-gods. Speaking of Lahore, spreading mango, banyan, pipal and other trees of large bio-mass were chopped down wholesale on the pretext of road widening. They were replaced by date palms. The mindless, inferiority complex-driven urge to look like the barren Arabian Peninsula had started.

This foolishness has not stopped to this day. Wherever old trees are cut to build new roads, date palms come up. Indeed, every new government building raised in the last couple of decades is blighted with the palm, which sequesters a fraction of the carbon of, say, a pipal or neem tree and which provides zero shade to a furnace-hot country. One wonders how stupid these bureaucrats can be to not see the need for shade in Pakistan where summer temperatures in the plains can soar to the high 40s Celsius.

Sadly, if general duty babus are slaves to the wishes of ignorant political masters, so-called professional foresters are the greatest criminals. Even after Punjab banned (in 2004) the plantation of water-guzzling eucalyptus for the third time, foresters at every level are still promoting this alien disease. One only has to visit any forest department nursery to see the hundreds of saplings ready for fools who have no idea that this is not an indigenous tree that is extremely detrimental to our fast-depleting ground water.

Mali
Pakistanis learn from the ignorant and the untrained. Every homeowner with a garden blighted by imported flora has one thing to say: ‘The mali (gardener) suggested these trees.’ Nowadays any illiterate, unemployed and unskilled person can hook a pair of garden shears on his bicycle handle and pretend to be a mali. This person only knows what he sees every other ignorant person doing. The boundary wall of a friend’s new house is lined with dozens of conocarpus because his mali had suggested the bane. When, on my advice, the friend ordered the mali to destroy them, he was told someone was misleading him. The trees are still there and will never be cut. -- SR

Even if the eucalyptus can grow to a large bio-mass and hold as much carbon as an old neem, it deprives us of over a hundred litres of water in a single day. This can be seen from a twenty-five year-old research of the Nuclear Institute for Agriculture and Biology (NIAB), Faisalabad. In effect, every alien eucalyptus is a tube well, drinking up our precious ground water. And Pakistan is a severely water-stressed country that will be dry by the year 2025.

Professionals of our forest departments and the babu enjoying the Grade-22 perks of federal secretary Climate Change cannot be bothered. They will not advise their political lords for fear of losing the job. Most alien saplings stuck into the ground grow into trees simply because no animal browses on them. Consequently, to show their efficiency to their political demi-gods, foresters and babus encourage trees, such as eucalyptus, date palm and, of late, the poisonous conocarpus.

Sometime in the early years of the last decade, the collective inferiority complex came into play again. Mustafa Kamal, who now heads his own political party, saw conocarpus on a visit to Dubai. He loved its dense green crown and heard that it grew into a tree virtually in weeks. He imported this alien and as mayor of Karachi cut down all thousands of old trees to replace them with the new alien. Indeed, in Makran and across coastal Sindh where it is very popular among the ignorant, the tree is known after him!

Conocarpus is double whammy. It is as thirsty as the eucalyptus and to make matters worse, it is more allergy-causing than Islamabad’s paper mulberry. Dubai learned its lesson quickly from the sewage lines damaged by conocarpus roots and from increased cases of hay fever and asthma. But we, still in denial about the havoc paper mulberry plays every spring with the people of Islamabad, are besotted with the fast-growing conocarpus.

If a foolish low-level politician was not enough to disease one part of the country, a much-flaunted ‘billion tree tsunami’ carried the conocarpus bane to Khyber-Pakhtunkhwa. Indeed, the way this pestilential, invasive tree has spread across Rann of Kutch, Tharparkar (thanks entirely to the Rangers) and the rest of the country, it is safe to say that before we die of water shortage, many of us will be suffering from pollen allergy and even asthma.

Endemic stupidity is clearly the hallmark of Pakistani officialdom. In late 1997 when M-2 was completed its sides were forested entirely by eucalyptus because the politician in-charge believed it to be a native species. In 2016, the eucalyptus between Lahore and Sukheke was cut down only to leave stumps in the ground. Now, the eucalyptus is the Hydra of the plant kingdom: cut it and it coppices becoming from one to upward of ten trees. So, while we now have ten times as many eucalyptus to drink up our scarce water, we also have coupled it with the thirstier conocarpus. Tens of thousands of this new disease can now be seen along the motorway.

Recently, on my request Brig (retd) Mukhtar Ahmed of Houbara Foundation called up the Inspector General of Forests to suggest a carpet ban on conocarpus. Mahmood Nasir turned out to be completely ignorant of this new alien invasion. I could only marvel at how blind these jokers in high places are.

The above shows that for its own reasons of showing ‘efficiency,’ officialdom will not support native flora, while politicians will mindlessly destroy old native trees in the name of development. A largely illiterate nation could have been educated on trees if the dozens of private television channels would fulfil their public service obligation by dedicating even as little as a minute each every day.

But that will never happen. Divorced from nature, the common person will forever remain ignorant and unsympathetic to the flora of this land. What I find singularly remarkable is that just by crossing the imaginary line of our border with India, I find a starkly different, friendlier, attitude to trees.