Why media is failing democracy

Rather than instigating animosity and limiting people’s thinking ability through sheer propaganda, media needs to invigorate critical thinking among people by providing them different perspectives through dialogue 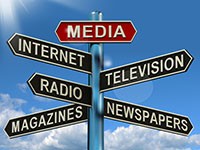 Chomsky and Herman’s book Manufacturing Consent: The Political Economy of the Mass Media came out almost 30 years ago and argued that mass communication institutions actually played a part of propaganda machines to form public opinion. Following is an attempt to assess the Pakistani cable news channels against the authors’ ‘propaganda model’ to understand their contribution to democracy in Pakistan.

In terms of size, ownership and profit orientation, our electronic media has yet to move towards consolidated ownership of few corporations, which should suggest a diversity of opinions. But the majority of our news channels are not run as primary businesses but as secondary (maybe even loss-making) businesses that are meant to secure the primary business. It is similar to the grass roots phenomena described by scholar, Ali Nobil Ahmad, in his paper Qalam ki Badmashi. He states that as newspapers do not pay journalists in smaller towns, reporters usually support themselves through blackmail, either restricting a story or getting it printed. This activity is so vibrant that people, at times, even pay money to get a press card.

He narrates another story whereby a business magnate started a media house only after he had to wait for hours to meet the prime minister while a senior journalist was called in as soon as he arrived. Thus, more than advertisement revenues, what matters more is being a power-player with access to state and government, which generates much bigger rewards and provides security to real business interests.

News channels have instead become a partisan tool for propaganda and point scoring, and are least interested in discussing substantive issues.

Second, the aspect of advertising aims at urban upper middle class consumer lifestyle, ignoring the issues faced by the working class such as labour, peasants and the rural population. Instead, middle class’s conservative moralist notions of security, corruption and self-righteousness dominate, which are more interested in passing a judgement rather than dialogue.

Third, in terms of news source and opinions, other than journalists, a regular feature on talk shows are retired military and civil bureaucrats who give their opinions as experts rather than academics or grassroots activists. Thus, the discourse gets confined around state establishment’s view of politics and society rather than an independent or bottom-up critique.

Fourth, the flak and enforcers who regulate the media against transgression simply do not exist within the weak civil society. Even the regulatory body, PEMRA, has not been able to ban anchors in extreme cases. Thus, those who can commit violence against journalists -- militants or Deep State -- instead hold this power over the media.

The last aspect in the model is state ideology which limits the narrative by making some aspects unquestionable. For the US, the state ideology was anti-communism. But for Pakistan, this seems to be the army’s prescribed definition of national security. Thus, in the Dawn Leaks affair, the substance of the story, the difference conceptions of national security between the army and civilian government, was never discussed by the media. Instead, the whole controversy was why this difference was even mentioned in the media.

Based on the above, it can be stated that electronic media has had conflicting effects on discourse. While it has increased access to ideas among the general public, it has also centralised and, thus, limited political discourse by mostly concentrating on national (Islamabad and Rawalpindi) power politics at the expense of even large cities, what to talk of issues of smaller towns or villages. The case in point being the Panama Leaks affair which has dominated discourse at the expense of all critical issues.

Further, the media’s profit motive has transformed politics into entertainment, as news are sensationalized, making 24-hour news channels the most watched while the race for ratings has degenerated debate into allegations and personal attacks. All this happen at the cost of strengthening the "public sphere" where dialogue and deliberations between different ideological currents (political parties) can lead to a critical engagement of positions followed by possibility of consensus among them.

News channels have instead become a partisan tool for propaganda and point scoring, and are least interested in discussing substantive issues. Thus, attesting to Nancy Fraser’s views that in reality public sphere has become an arena of mass-mediated staged displays for the manufacturing and manipulation of public opinion.

For all the talk of financial corruption; it is imperative that channel owners, editors and anchors do some self-reflection on ethical and intellectual corruption because their current methodology of provoking fights among guests, or personal attacks on the integrity of those who differ with them politically or ideologically, negates the very notion of democracy that they supposedly uphold. For democracy, they need to invigorate critical thinking among people by providing them different perspectives through dialogue in an environment of mutual respect, rather than instigating animosity and limiting people’s thinking ability through sheer propaganda.

Why media is failing democracy