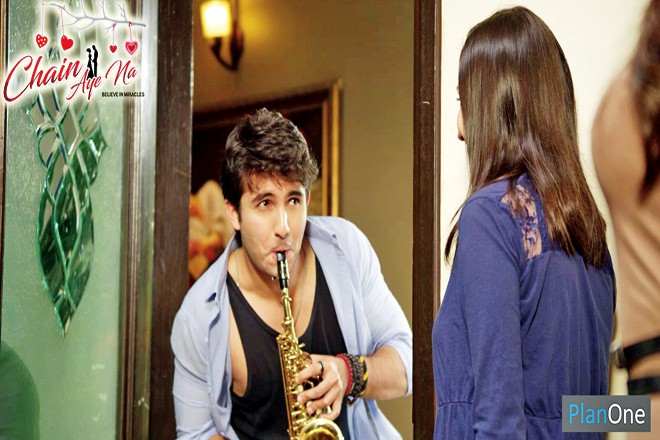 Director Syed Noor is a big name when it comes to Urdu and Punjabi films but as they say, you are as good as your last film. The maverick writer/director delivered Chain Aye Na that came 20 years too late as the plot, execution and techniques resembled films made in the ‘90s.

CAN is the story of Rayan (Shahroz Sabzwari) who falls in love with Ruba (Sarish Khan) during the wedding of his friend’s sister. When he finds out that she is all set to get married to Murad (Adil Murad), he travels to Karachi to make his presence felt and intervene with declarations of his love for her. The obsessive Rayan befriends Ruba’s father (Nadeem Baig) and wins her over by being persistent. Who gets the girl is a question only those who have watched the film can answer.

Nadeem Baig and Adil Murad shine as the better actors in the film as they get the margin to perform; Shahroz can do better and Sarish Khan, who is the granddaughter of legendary Sabiha Khanum and Santosh Kumar, was let down by both script and styling. The music does grow on you but it is only for the ears of those who still love the ‘90s. Syed Noor has not taken well to criticism of his film and trust me, we have seen even worse films, but he has to adapt to the new ways of filmmaking if he wants to make a return that can register with the masses. He still has the capability to touch the audience’s nerve but for that, he has to upgrade his style of filmmaking!

Toilet humour seems to be at the tip of every writer’s pen in Pakistan but no one thought of taking the toilet issue seriously. Akshay Kumar stars in Toilet: Ek Prem Katha that does exactly that in India, a country where mobile phone is available to 90 per cent of the people but a common loo isn’t. Director Shree Narayan Singh’s take on the issue is commendable as it entertains the audience without making them uncomfortable.

Keshav (Akshay Kumar) is a 36-year-old guy who wants to get married and have stability in his life. When he does get married to Jaya (Bhumi Pednekar), she leaves him in the first few days because his has a backward system and there is no toilet in the household. Does he win back his wife or does the toilet come in between their lives as a villain? Watch the film to know more about the social issue that prevails in India and Pakistan.

Acting wise, the film belongs to Akshay Kumar who at 49 manages to play the 36-year old convincingly; his one-liners are a treat as he uses his ‘advanced’ GK (General Knowledge) to win over a wife and supporters for his quest. Bhumi Pednekar gets powerful dialogues in the second half of the film. Yes, it is a fictional story yet it has happened to a few people in reality; films like these will help people realize the importance of having basic amenities, especially when it comes to health and hygiene. People in Pakistan must also realize that there are many such topics in our country that need to be addressed.

Some films should never see the light of the day and Nadeem Cheema’s Geo Sar Utha Kay is one such flick. In an attempt to recreate the Sholay magic in Pakistan, the director came up with a movie that couldn’t attract more than a dozen people per show. The prime reason being nepotism as both the leading men were nephews of the director and sons of the producer, renowned film baddie Shafqat Cheema.

The plot of the film revolves around the fictional village of Rajnapur where Kalu (Shafqat Cheema in a Gabbar-inspired role) rules with an iron fist. He kills a police officer on vacation that brings the rest of the gang (comprising of Sheharyar Cheema and Umar Cheema) to the village. They are befriended by a corrupt SHO (Babar Ali) who helps them take down the bad guys and clean the streets of crime and grime, but not before, they lose many allies in the process.

Umar Cheema has a future in the industry if he tries to better his dialogue delivery and acting; Sheharyar Cheema could only have appeared as the hero in a film produced by his father because he lacks the hero’s touch. Babar Ali was one of the reasons to watch the film as he knows his craft and we shouldn’t forget his contribution to the revival of the ‘90s. Eternal bad guys Shafqat Cheema, Rashid Mehmood etc. overacted as usual while the songs were quite pathetic with no recall value. It was this disastrous filmmaking that made Geo Sar Utha Kay a benchmark for new filmmakers as to how not to make a feature film.