From Af-Pak to Af-South Asia 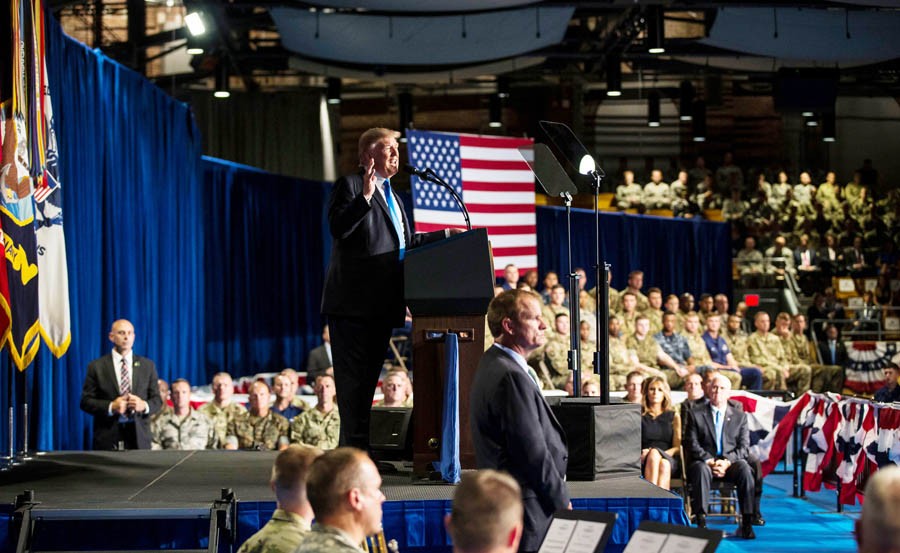 When candidate Barack Obama was running his campaign for the highest office, he pledged that the US forces in Afghanistan would be withdrawn. Obama as president ended up increasing the military footprint there in his first year. When candidate Donald Trump campaigned, he too criticised the American military presence in Afghanistan. He wanted to get the forces out of that country but, as president, has decided otherwise. President Trump has announced the US will increase its troop level on the ground in Afghanistan.

It appears the US is yet again having an undesired but helpless experience that can easily be described as Orwellian. The great writer, George Orwell, had warned: The war is not meant to be won, it is meant to be continuous.

As of last week, America’s war in Afghanistan will go on, under the new leadership, with no end in sight.

In his very first address about his administration’s strategy for Afghanistan, Trump declared: "Our troops will fight to win. From now on, victory will have a clear definition." That definition, Trump proposed, entails military gains only. His team spent months deliberating and has concluded that diplomatic, political and economic plans have not worked. "We are not nation-building again. We are killing terrorists," he said.

The notion that Pakistan has been harbouring terrorists is based on frustration with Pakistan that has been growing for the last few years among academics, diplomats, officials and politicians.

The newly unveiled strategy remains vague though: as Trump said, "We will not talk about numbers of troops or our plans for further military activities," adding that "Conditions on the ground, not arbitrary timetables, will guide our strategy from now on. America’s enemies must never know our plans or believe they can wait us out."

The decision to increase the number of troops in Afghanistan was taken earlier this year. Trump is expected to authorise 4,000 more troops for counter terrorism missions. The new forces will join the already existing 8,400 US and almost 5,000 NATO soldiers on the ground training and advising Afghan security forces. Trump said he would give military commanders the authority to act in real time and target terrorist networks.

Interestingly, Obama’s plan to win in Afghan was first titled "Af-Pak". He had included India as part of the designation, but Delhi resisted and then rejected it. However, Trump has named his plan "Af-South Asia" and has invited India to play a bigger role. "India makes billions of dollars in trade with the United States -- and we want them to help us more with Afghanistan, especially in the area of economic assistance and development," Trump said. Prime minister Modi has not declined the offer so far.

Since the beginning of American engagement in Afghanistan sixteen years ago, there have been instances where high level American officials charged Pakistan, but this is the first time that a US president has publicly called out Pakistan so boldly and brashly. "We can no longer be silent about Pakistan’s safe-havens for terrorist organisations, the Taliban and other groups that pose a threat to the region and beyond," Trump said in his address. He did acknowledge Pakistan’s huge human and other sacrifices.

Announcing the "next pillar" of his new strategy to change the US approach towards Pakistan he said, "Pakistan has much to gain from partnering with our effort in Afghanistan. It has much to lose by continuing to harbour criminals and terrorists. In the past, Pakistan has been a valued partner. Our militaries have worked to together against common enemies."

This notion -- of Pakistan harbouring terrorists -- is based on frustration with Pakistan that has been growing for the last few years among academics, diplomats, officials and politicians. The mood was already grim and angry. Pakistan’s diplomatic corps in Washington and Islamabad has failed miserably to quell it.

Under the Obama administration last year, Pakistan could not secure the F-16s that it needed. US lawmakers voiced their concerns one after another and blocked the deal. Under the Trump administration, numerous politicians on both sides of the aisle have raised objections and shown their displeasure. We have written about these issues on these pages in detail. Quite recently, the Trump administration cut down more than 300 million dollars in military assistance to Pakistan for not taking sufficient action against the Haqqani network. There have also been various bills pending in the Congress to drop Pakistan as an ally, if not declare it as a terrorist-sponsor state.

Hence, it is not surprising that the National Security Council spokesperson, Michael Anton, has declared that the US president is sending a clear warning. "I think the important takeaway for the Pakistani government is that they should understand they’re on notice from this president, from this administration." Anton further said, "We haven’t been getting a good deal from them… In the worst case, the Pakistani government has been guilty of active direct support for terrorist groups."

US Secretary of State, Rex Tillerson, expanding on Trump’s Afghan strategy repeatedly warned Pakistan of losses it might have to endure. "Pakistan must adopt a different approach, and we are ready to work with them to help them protect themselves against these terrorist organisations." He said, "We have some leverage that’s been discussed in terms of the amount of aid and military assistance we give them, their status as a non-Nato alliance partner. All of that can be put on the table."

He also mentioned the strenuous relationship between the two countries and declared that over the last few years there has been a real erosion in the confidence between the two governments. "There’s been an erosion in trust because we have witnessed terrorist organisations being given safe havens inside of Pakistan to plan and carry out attacks against US servicemen, US officials, disrupting peace efforts inside of Afghanistan," he said.

Tillerson wasn’t shy to pronounce that unilateral action could be taken again. He stressed the US will "attack terrorists wherever they live, and we have put people on notice that if you are harbouring and providing safe havens to terrorists, be warned. Be forewarned. And we are going to engage with those who are providing safe haven and ask them to change what they’re doing and help us help them."

He then further clarified, "the greatest benefactor, other than the Afghan people themselves, to achieve stability and peace in Afghanistan, are the people of Pakistan."

The sentiment resonates across the board in the political sphere. Even this divided administration is unified when it comes to dealing with Pakistan. The relationship between the two countries remains transactional except, that this time, it’s not an "open cheque" but a "pay-as-you-go" mode. It also includes penalties. For Washington, the ball is in Islamabad’s court. Keenly waiting how it plays out.

From Af-Pak to Af-South Asia