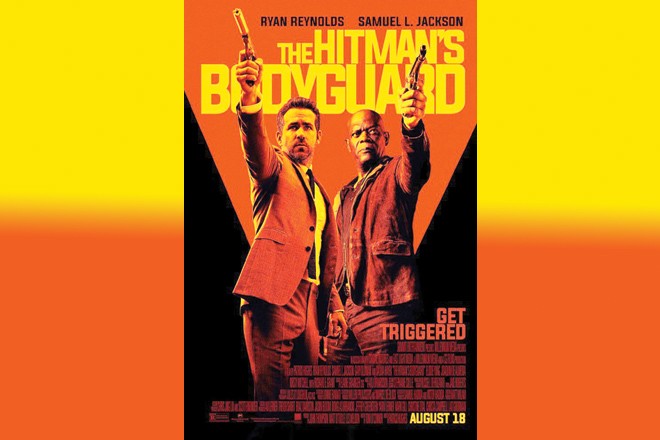 When it comes to this R-rated action comedy, the joke is all in the title. Professional killer-for-hire Darius Kincaid (Samuel L. Jackson) needs bodyguard Michael Bryce (Ryan Reynolds) to protect him from England to the Hague, where the hit man is set to testify against a Belorussian tyrant (Gary Oldman, doing everything he can with a boxed-in role). In exchange, Darius’ wife, Sonia, will earn a get-out-of-jail-free card - she’s played by Salma Hayek, who’s almost excuse enough to see this movie. Her swearing is some kind of profane poetry. And boy, can she kick ass.

Did we mention that Darius and Michael really hate each other? So there’s that, plus tons of fights and car chases and boat chases to distract you from the recycled plot. The script by Tom O’Connor is a throwback to the glory days of Shane Black (The Last Boy Scout, The Long Kiss Goodnight and the immortal Kiss Kiss Bang Bang), but unfortunately, Black isn’t around to do tune-ups. Patrick Hughes directs with all the originality and verve that you’d expect from the dude who gave us The Expendables 3. But all is not lost, not when Reynolds and Jackson are present and accounted for, constantly cracking wise.

And Reynolds may be doing his quips with the same sneer routine he deployed in Deadpool (minus the superhero drag), but it never gets old … or at least it hasn’t so far. Reynolds and Jackson make this summer lunacy go down easy with their banter and bullet-dodging skills. They’re the only reason that The Hitman’s Bodyguard doesn’t completely sink into the generic quicksand from whence it came.

Steven Soderbergh, the Oscar-winning director of Traffic (2000) and films as diverse as Sex, Lies, and Videotape (1989), Kafka (1991), his two-part biopic Che (2008) and The Girlfriend Experience (2009),  returns to features after a four year absence with a cool breeze of summertime sweetness called Logan Lucky. On the surface, this let’s-rob-a-racetrack caper looks like a redneck spin on Ocean’s 11, his starry (Clooney, Pitt, Damon) 2001 box-office hit. And in some ways it is.

Soderbergh is too inventive and intuitive a filmmaker to be content with a lazy heist film. Set in Trump country, a blue-collar South of lost jobs and broken dreams, it’s a terrific, twisty, funny-as-hell crime flick about so-called hicks who decide that making America great again starts right at home.

Channing Tatum, Soderbergh’s own Magic Mike, is a rogue charmer as Jimmy Logan, a West Virginia country boy who’s just lost a construction gig due to a football injury that left him with a limp. His personal life is similarly hobbled by Bobbie Jo (Katie Holmes), the ex-wife who won custody of their daughter. Jimmy drowns his sorrows at a roadside bar run by his brother Clyde (Adam Driver, a deadpan delight), a war vet whose souvenir from Iraq is a prosthetic lower left arm. The siblings hatch a plan to rob the Charlotte Motor Speedway in North Carolina on Memorial Day weekend; having worked the track’s underground, Jimmy knows that’s where the money is funneled. And, hey, as a getaway driver they can use their speed-demon sis Mellie (Elvis’ grandkid Riley Keough)!

For professional help, the Logans turn to an explosives expert aptly named Joe Bang - played by an off-the-chain hilarious Daniel Craig, complete with a holy-shi*t! blond buzzcut and hillbilly twang. (His screen credit reads: "And Introducing Daniel Craig." Good one.) You’ll be pleased to learn that Bang delivers what his name promises - of course, he has to be sprung from jail first and then snuck back in before the guards catch wise. Soderbergh plots and paces the underground robbery - fast cars roaring overhead - with the skill of, and we mean this as a compliment, a born thief. Cheers, too, for first-time screenwriter Rebecca Blunt for keeping the surprises coming (let’s assume she’s real); ditto Seth MacFarlane and Hilary Swank in supporting roles too good to spoil.

Haven’t we seen this all before? Maybe. But Soderbergh takes his time with each of these two-bit crooks, so we get to know them as people instead of white-trash stereotypes. It’s not dawdling - it’s an attention to character that makes all the difference. The late, great Robert Altman was known for such putative toss-offs (think California Split or The Long Goodbye) that play like a party yet still linger in the memory. Logan Lucky belongs in that pleasurable company. It’s true that any hack can string together the elements of a heist film - suspense, humor, convoluted plot, trick ending. Soderbergh, however, knows how to make those babies dance.