A man of few words and deep thought 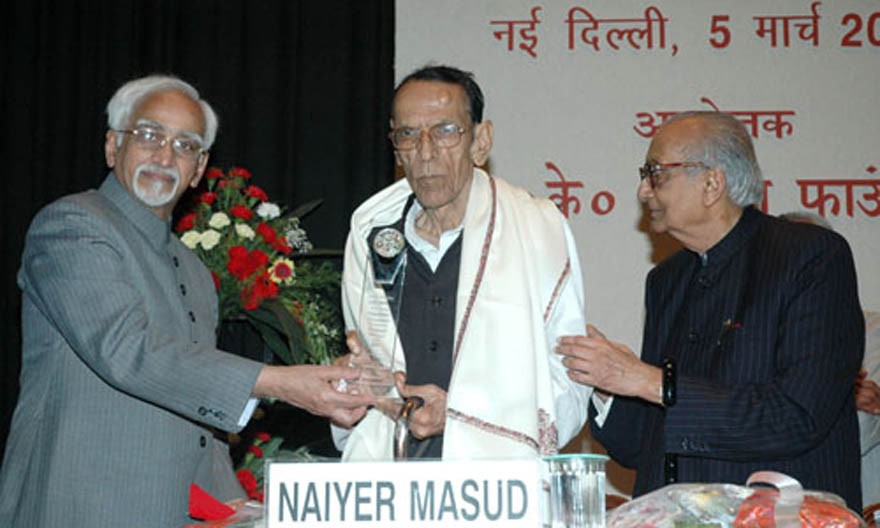 Naiyer Masud passed away last month and readers, fellow writers, editors, critics, and translators mourned. A lot has been written about him and his work, establishing that he was in a class by himself. As a writer one can only envy and emulate his attention to language, choice of words, his unique technique of pairing off to create tension from the unspoken, unwritten, the uncanny, the dreamlike reality, the unfulfillment of desire, the unrequited love, the incompletion of life, the melancholic surrealism of our inner chaos.

My literary journey traverses his fiction. I have written stories in English and Urdu which were influenced by Naiyer Masud’s fiction. My Urdu story ‘Nizam-e Arzu’ was influenced by ‘Nusrat’ and ‘Ojhal’. My English short story ‘Snakeskin’ is indebted to his Occult Museum.

A careful reading of his stories also taught me to not write like him as our worlds and subject matters were very different. But it was by reading Masud that I learned how to let the dead wood go.

In my mind, Umar Memon and Naiyer Masud are inseperable. There was a time when I consumed all available material on South Asian fiction in libraries and independent bookstores in San Francisco; fiction, novels and short stories, in translation. Most of what I found was edited and translated with carelessness and mediocrity. Not all, but most. I don’t exactly remember how I ended up with a book edited by Professor Umar Memon, The Color of Nothingness: Modern Urdu Short Stories. This was the first time I had encountered a book of South Asian stories that impressed me. The selection of stories was impeccable, although the title story stood out because it felt very different from what other Urdu writers had written so far. My curiosity piqued. I discovered other books translated by Memon and found Domains of Fear and Desire: Urdu Stories. Again the title story stood out. Both title stories were written by Naiyer Masud.

Essence of Camphor was published in April 2000 and graced bookstores all over the US. A few years later, translations were published in India as well, under the same title by Katha and reached audiences way beyond the Urdu circle.

When fiction writer and scholar Roshni Rustomji-Kerns nudged me to phone Memon saheb, assuring that we’d find a lot in common, I called him and praised the two stories and his high-quality translations. He encouraged me to take a stab at translating two stories, ‘Itr-e Kafur’ (Essence of Camphor) and ‘Sheesha Ghat’. As luck would have it, ‘Sheesha Ghat’ was chosen by a literary organisation in New Delhi and was included in Katha Prize Stories Volume 7. All the stories chosen from various Indian languages had to be translated before the volume could be published. They approached Memon saheb, who pointed out that the story had already been translated. And so it was that I was awarded the Katha Translation Award in the Urdu short story category, and an invitation to attend the ceremony was mailed to me.

I knew Avinash Pande, the Indian Consul General in San Francisco and the son-in-law of an Urdu poet Raj Narayan Raz, and hence got the visa.

The day we were all supposed to check in at the hostel where writers and translators from all over India were to stay, Naiyer Masud and I looked for each other. I knew this because someone told me that Masud saheb was looking for me. The chase was turning out to be like one of his stories when suddenly I found myself face-to-face with a man who I thought could be the great writer. He was holding me with his gaze, a little out of breath, in the middle of a dark stairway. He said: "Moazzam?" I replied: "Masud saheb?" Then came the most generous words ever uttered to me, "Mera khyal tha keh Itr-e kafur ka tarjuma naheen ho sakta" ["I had thought that Itr-e Kafur could not be translated"]. A smile broke on his thin face; we hugged. I told him that due to the diligent Elizabeth Bell, Essence of Camphor went through close to 15 revisions.

Although our encounter was brief, it was memorable. He talked, with few words, about the world created by Borges to Intizar Husain’s buses. We sat through some very boring seminars where two or three persons usually dominated the conversation. In one session he said to me, "Yeh ab kis qism ki guftagu ho rahi hai!?" In order to cheer him up, I took out the gift my co-translator Elizabeth Bell had sent for him and offered it to him. A bit taken aback, he held the metal sculpture, a dog, 8×8 inches, rusty, banged up and misshapen, and kept staring at it in silence. Finally, he said, "Picasso bhi isi tarah banatay thay!" and told me to thank Elizabeth. He had met his match. He asked me to come visit Lucknow. I wish I had.

I heard from one of the organisers that he almost cancelled coming but Geeta Dharmrajan had pleaded to him that I was coming all the way from San Francisco just to see him so he had yielded; but once the main ceremony was over we walked him to the train station and bid each other farewell.

I often meant to write to him or call him up but I didn’t want to break the magic spell that our brief encounter had created. I focused on continuing to meet him through his stories in Urdu thanks to Ajmal Kamal, and through translations. Right around that time, an entire issue of Annual of Urdu Studies was published edited by Memon saheb, who had his translations published in the US by publishers who target only academic libraries, not bookstores. I pointed this fact out to Memon saheb. We wanted Naiyer Masud’s translations to reach a wider audience and soon we found a solution. I chose a literary press and suggested Memon saheb to contact them about drawing comparisons between Kafka and Borges. It worked!

Naiyer Masud was a very humble person and had no qualms about the role Memon’s translations had played in catapulting him to the world stage. After Naiyer Masud received the Saraswati Samman, one of the highest literary awards, he immediately wrote two letters to Memon saheb to show his gratitude despite his falling health that made his hand unsteady. In one of the letters, he not only thanked Memon saheb but all the others by name, reserving special mention for me and Elizabeth Bell.

Memon saheb recently wrote to me: he painted Naiyer Masud as a man of few words and deep thought, and said that he began translating his stories without any nudge, pressure or hint from the author. Both held each other in deep respect and affection. I have the satisfaction of having met both of them and respecting their work. But the satisfaction of having translated his best short story, Essence of Camphor, is mine alone.

A man of few words and deep thought