The reverberations of Pakistan’s experience with religious populism, especially in some recent times, can be experienced while reading the book 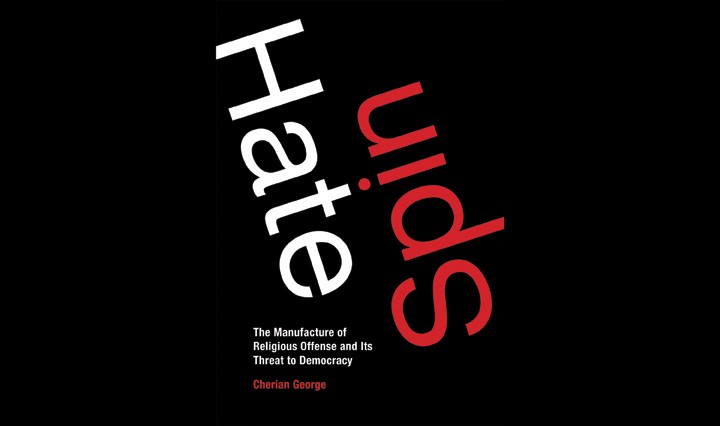 In their vehement critique of the media industry, Herman and Chomsky (1988) skilfully show how powerful corporate interests shape the news. It has been 30 years since then; democracies world over, including the US, have ostensibly experienced growing right-wing populism, radical campaigns and hate propaganda. Governance-wise these nations lie on an entire spectrum of democratic maturity, media concentration and diversity. Clearly, political economy is just one side of the powerful influences that shapes news content.

In Hate Spin: The Manufacture of Religious Offence and Its Threat to Democracy, Associate Professor Cherian George unravels how strategic religious hateful propaganda is being used as a tool by skilled political entrepreneurs in democracies the world over, for explicitly political goals. He draws particular attention to ‘offence-taking’, which is about playing the provoked victim with malicious intent, as opposed to the more commonly understood ‘offence-giving’ notion of hate speech. Together, the two form a double-edged sword he calls Hate Spin, which "exploits group identities to mobilise supporters and coarse opponents".

George begins his inquiry by asking why there are strategic time lags between incidents involving violent indignation -- protests, court petitions and such -- and the moment of ‘offence giving’ activity -- offensive cartoons, films -- in the name of which they are ‘triggered’. Shrewd middlemen, usually elites, skilled at public relations, he argues, mobilise, often genuine, emotions of people where they see as an incentive. This contentious politics often fades away when there is no longer political advantage to gain.

To expand on these claims, a thick comparison of political campaigns of the Hindu-right in India, of Christian-right in the United States and of the Muslim-right in Indonesia is presented.

Hate Spin is a chilling reminder of the tangible link between material injustices in a society and restrictions in its market place of ideas. For instance, the escalation of the cultural homogenisation project of the Sang Parivar, dubbed Hindutva or ‘Hinduness’ (distinguishable from Hinduism), in Modi’s India is explained through the Gujrat pogroms in 2002, ghettoisation of Muslims and Muzaffarnagar riots in the run-up to 2014 Indian elections.

One can feel the reverberations of Pakistan’s own nasty experience with religious populism, especially in some recent times, throughout the reading. George’s deep theoretical insights will demystify everyday insightful news content we have grown accustomed to in Pakistan.

Such agents cause more abuse in closed societies where freedoms are already restricted. But in open societies this phenomenon presents a genuine dilemma for authorities. The unique case study of the US is telling. George shows how the ‘Islamophobia Network’ has taken advantage of the exceptional freedoms afforded by the First Amendment. However, its activities are necessarily restricted by the US Constitution’s equal importance to protection of minorities, including religions, against discrimination. In this context, the instigators of mosque-banning campaigns, for instance, might be losing the legal battle but they have succeeded in pushing hate propaganda in the middle of public discourse.

Generating national conversations thus is often the prime motivation behind Hate Spin. Which it does at the unreasonable expense of other point of views. This makes it anti-democratic.

The author also engages with various ways to curb the menace. He charts ethical responses that professional journalist can take; upstream approaches that deal with early warning signs of potential incitement and downstream approaches for troubleshooting the impact of hate campaigns. He emphasises the particular role that civil society and religious actors can play to ‘nudge hate speech out of public center’.

Not surprisingly, George believes that the overregulation of hate speech usually backfires for authorities. Insult laws such as those protecting blasphemy, for instance end up providing legal munitions to vested interests, which further harms minority groups and opinions. Citing the case of Shirin Dalvi, a Mumbai newspaper editor who was hounded by authorities when complaints were lodged against her after publishing a picture of the cover of Charlie Hebdo bearing the caricature of Prophet Muhammad. Or, the anti-pornography bill ratified in 2008 in Indonesia that gave a license to declare illegal anything certain uncompromising Muslim clerics deemed as indecent.

One shortcoming is that the analysis sometimes blurs the boundaries between populist politics in general and Hate Spin. For instance, when constitutional provisions to ensure a greater participation of out groups is suggested as a measure that can limit marginalisation of those in the crosshair of dominant groups. In contexts where politics of ‘otherness’ is a norm, hate speech thus could be inevitable. It would be useful to see how Hate Spin operates in hybrid democratic contexts, such as Turkey, Russia and Pakistan, to further crystallise the more dangerous repercussions of hateful propaganda from legitimate expressions of identity politics.

George is aware of this complexity as his cases draw strength not just from the novelty of analysis but by engagement with the most current debates at the intersection of free expression laws, human rights framework and religion. He believes that a plural and tolerant democracy doesn’t require religion to be forced out of the public sphere but that rule of law must be supreme.

One can feel the reverberations of Pakistan’s own nasty experience with religious populism, especially in some recent times, throughout the reading. George’s deep theoretical insights will demystify everyday insightful news content we have grown accustomed to in Pakistan. While specific analysis of international episodes like Salman Rushdie’s The Satanic Verses, and Jylland-Posten cartoon controversy will make one aware of something that is always at the tip of our tongues but somehow get lost amid the ruckus when such stories land.

This review should be taken as a trailer for it’s impossible to highlight many other original insights and facts that make it a compelling read. Relevant international organisations and actors at different sides of the misinformation battle for instance, will be a valuable resource for journalists, policy makers, academics, students and concerned citizens fighting this web of hate and creating a more inclusive Pakistani society.