In times of partition 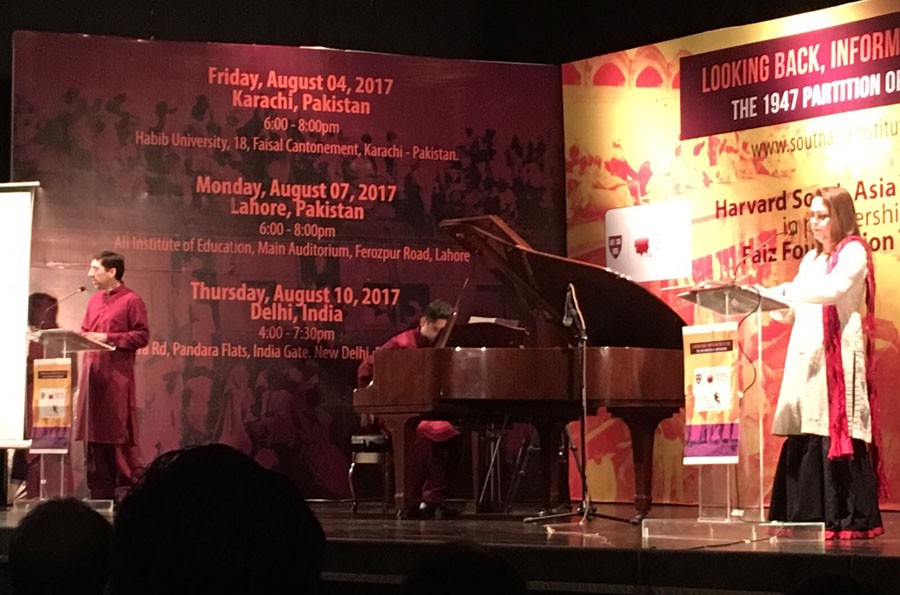 Monday last, the Harvard South Asia Society held a seminar at Ali Institute, titled ‘Looking Back, Informing the Future: The 1947 Partition of India.’ It looked into the remaking of the subcontinent.

The moderator of the event was Professor Jennifer Leaning from Harvard University’s Department of Public Health and Human Rights. For the first session, the panel consisted of Yaqoob Bangash, Assistant Professor at Information Technology University; Ali Raza, a Research Fellow at FXB Center for Health and Human Rights at Harvard; and Nadhra Khan, Assistant Professor and Art Historian at Lahore University of Management Sciences.

The focus of the research presented at the event by Yaqoob Bangash, the first speaker, was primarily the consequences of the 1947 partition and, particularly, the role of the government of the two neighbouring countries. Special emphasis was put on the numerical figures of the lives lost and casualties and how the documented evidence regarding partition efforts was preserved later on.

The humanitarian perspective of the War of Independence of 1947 was also discussed through a look at how the civil society actively participated in and facilitated the rehabilitation of the refugees, at a time when a lack of concern was shown by the international community.

An interesting point that Bangash highlighted was relating to the methodology adopted by the government in resettling people. He particularly shed light on how the people were not resettled in communities similar to their native environments, to avoid segregation amongst the masses in post-partition Pakistan.

About the pre-partition situation, he spoke of how the educational institutions in the country had already been prepared for the partition as early as in April 1947, even making lists of those students and faculty members expected to migrate and preparations for administrative changes anticipated post-partition were also made accordingly. In fact, foundational documents were taken from the Punjab University in Pakistan and used in setting up the Punjab University in Indian Punjab. People took a plethora of literature from the Pakistani university during partition, as the panel’s research proved.

Ali Raza presented the military perspective of the happenings of 1947, focusing on the decentralisation of nationalist groups before, during and after independence. "The railway system’s role in independence was more than just transport," he said. "It was the main intelligence system through which the situation of the country was being coordinated and controlled by the central government and military."

He also explored the power dynamics of the princely states and how they influenced the future of the nascent states, as well as the role of ostracised communities and castes and the method of systematic bloodshed in which they were exempted, so that they may be used as man power later on for dealing with the aftermath of the bloodshed.

Nadhra Khan’s research focused primarily on the evolution of the spaces and places where political activity took place before and after the partition; also the ordinary cities and how the lifestyle of certain areas changed with the change in demographics over time.

Her research showed that most of the places were not mutilated after the demographic change, but in fact were preserved. It also focused on literature laden with cultural bereavement as the geo-political landscape shifted, how the slogans of ‘Inqilaab Zindabad’ influenced the sentiments of the people, and how influential figures like Lala Lalpat were starkly remembered in poetry and prose.

Session Two of the seminar, titled ‘Hum Tou Dekhein Gey,’ was presented by the grandchildren of Faiz Ahmed Faiz -- Adeel Hashmi and Mira Hashmi. It comprised reading of the letters exchanged between Faiz and his wife during the former’s time in prison, while Adeel recited the translations in Urdu of Faiz’s letters, and Mira his wife Kulsoom’s letters in English. This was accompanied by instrumental music, played by the extremely talented pianist Asad Anees, who is also the only Pakistani to have had the honour of performing in the prestigious Carnegie Hall in New York.

In times of partition