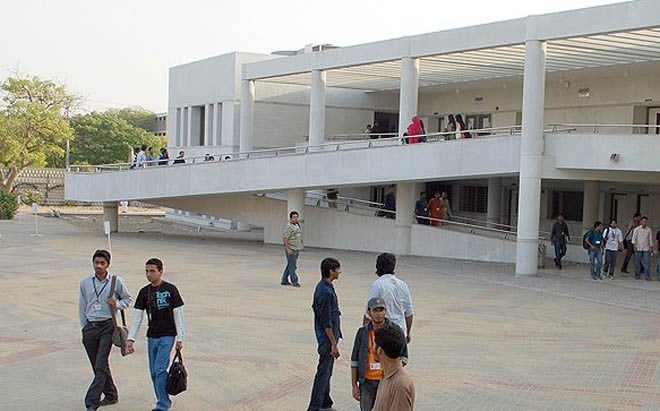 A conference was organised by the Counter Terrorism Department (CTD) Sindh on July 12 at the Central Police Office, Karachi, where leading academics and vice chancellors of various Sindh varsities, including private and public sectors, were invited to talk about the growing radicalisation in campuses.

During the conference, it was observed that the next generation of militants is more likely to have university education rather than a madrassa background. To prove their point, the recent cases of Noreen Laghari and Saad Aziz were quoted. However, these two examples are not the only ones where educated youth have fallen into the hands of extremist elements.

What was perhaps not discussed or reported was the terrible and brutal murder of Mashal Khan which is perhaps the most extreme example of radicalisation of a campus.

Talking about Karachi University (KU), Dr Hassan Auj a civil society activist, said, "We are now scared of westernised, clean-shaven religious zealots who keep threatening the teachers with a moderate approach. Recently, a teacher at the KU was threatened for maintaining a neutral view regarding Mumtaz Qadri and he had to leave the class since students were harassing him."

In May 2015 when a bus carrying members of the Ismaili community near Safoora roundabout was targeted, killing more than 40 people including women and old men, a majority of the 11 attackers involved were highly educated including engineers and business executives.

Former Director General Federal Investigation Agency and counter terrorism expert, Tariq Khosa said, "The youth of today are misguided. The state has failed to provide moral authority and guidance to these youngsters. The youth are invariably influenced by the environment; product of a society that has not seen social justice and rule of law. There is cut-throat competition and success is achieved through means foul or fair".

A couple of months back, the CTD Sindh had conducted a survey inside the Central Prison, Karachi of more than 500 alleged terrorists including hardcore militants. Out of 500 respondents, 64 had post graduation degrees and 70 were graduates.

Last year, an Islamic State gang was busted by intelligence agencies and the head of terror outfit was Hafiz Umar. He was an electronic engineer and one of his brothers, Hafiz Nasir, had a master’s degree in Islamic Studies from KU. Nasir was involved in Karachi’s Safoora carnage and has been awarded death sentence by the military court last year. The deputy of Hafiz Umar was a Mechatronic Engineer of well-known National University of Science & Technology (NUST) - Ali Rehman alias Tona. The Joint interrogation Team (JIT) report of Saad Aziz reveals he was brainwashed by Ali while doing internship in a multinational company.

On August 26, 2011 Shahbaz Taseer, son of slain Governor Punjab Salmaan Taseer, was abducted from Lahore’s M.M. Alam Road while he was heading towards his office. The group that initially abducted Taseer comprised of local militants who handed him over to International Movement of Uzbekistan (IMU). The ring leader of the kidnappers of Shahbaz Taseer was Usman Basra, a graduate of University of Engineering and Technology, Lahore. Basra was also involved in the abduction of an American aid worker Dr. Warren Weinstein who was later killed during a US drone strike in January 2015 which was aimed to target al-Qaeda operatives in North Waziristan.

The former Deputy Amir of al-Qaeda Indian Subcontinent (AQIS), Ustaad Ahmed Farooq, had studied at the International Islamic University, Islamabad. He was killed in an American drone fired missile in Shawaal area of North Waziristan on January 15, 2015. Ahmed Farooq’s real name was Raja Muhammad Salman and he was son of Islamabad’s well-off educated family. His father was a graduate of Columbia University, New York and had served as Professor in Quaid-i-Azam University Islamabad. His mother was a former Jamaat-e-Islami Member of National Assembly (MNA). One of his brothers is a doctor in Pakistan Army. Ustad Ahmed Farooq’s command was taken over by Atif Ghori who too hailed from Islamabad. Ghori also studied at the International Islamic University.

In July 2015, a Law Enforcement Agency (LEA) apprehended some militants of AQIS from Karachi. More than a dozen young boys studying in eminent educational institutions of Pakistan were taken into custody. They had planned to carry out an attack on the Corps Commander Karachi office, DG Rangers Sindh and ISI Sindh Headquarter. Some intelligence officials were also their targets. A high ranking security source anonymously disclosed that a few among arrested had a family background of armed forces and at least four boys were picked up from garrison area of Malir Cantt Karachi. The gang leader was a son of a known religious political group leader based in the metropolis.

Three boys of the gang, who were engineers, were working on anti-drone technology. Dr Syed Jaffar Ahmed, former professor of the University of Karachi, said, "It was believed that only the seminary students were indoctrinated and trained (for militancy). Now the phenomenon is spread to the English medium and private sector educational institutions and it is being done by organisations aiming for political Islam with the help of their student wings."

"Social media has become a tool for Daesh (and other organisations) to lure the youth towards them, they are using fake and fictitious videos to gain sympathies of the ignorant people," explained Sanaullah Abbasi, the Additional IG CTD Sindh.

The global militant organisations consider these social media applications as an essential tool to propagate their agenda and a medium to connect themselves with their future human fuel. The recent case of Noreen Laghari of Jamshoro University is a prime example of this trend. The Pakistani cyberspace is unguarded against cyber terrorism threat. Institutions like the Pakistan Telecommunication Authority (PTA) and Federal Investigation Authority (FIA) are ill-equipped to counter online terrorism.

According to Abbasi, life has no meaning for an ordinary man "and religious parties are exploiting this aspect of human psychology. Because of bad governance people are deprived of justice, they believe in vigilante justice". A couple of months back, the CTD Sindh had conducted a survey inside the Central Prison, Karachi of more than 500 alleged terrorists including hardcore militants and some startling facts were unearthed. According to the details, out of 500 respondents, 64 had post graduation degrees and 70 were graduates. When inquired about their family monthly income, 117 disclosed that it was above 50,000 rupees.

During the conference of CTD Sindh, it was agreed that there should be social surveillance of students and the faculty. Peer review, parents review, faculty review of students will be done and university administration will coordinate and cooperate with law enforcement agencies.

"The state and society need to be on same page. We must have rule of law and healthy avenues to harness the potential of the youth. Again, the primary role has to be played by the state," explained Tariq Khosa.