Balochistan lags behind other provinces when it comes to representation in federal government, military, bureaucracy and other organisational structures of society 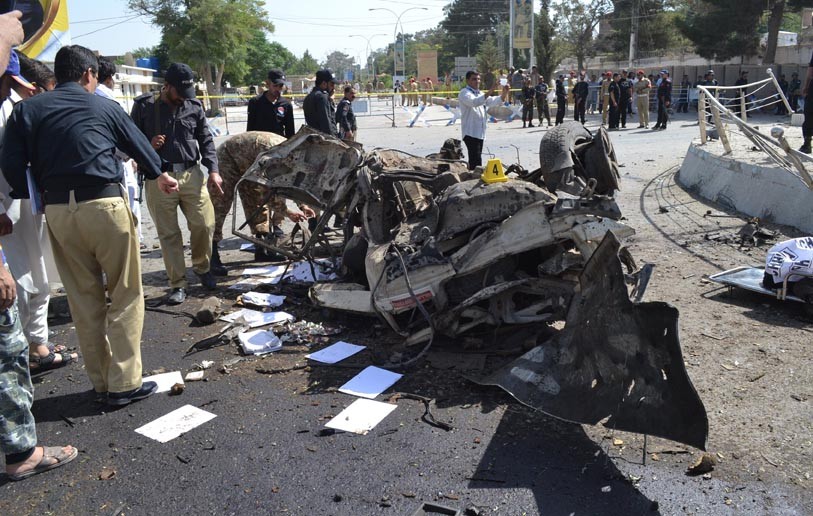 The concept of alienation is as old as mankind itself. Erich Kahler, a famous sociologist once remarked that "the history of man could very well be written as a history of the alienation of man." In wider analysis of social sciences, it is universal, indispensable, elusive and multidimensional with myths and realities. Alienation factors in a community are considered as one of the major causes of dissatisfaction, resistance and instability amongst people towards state and societal structure.

Similarly, Balochistan since independence has been suffering from alienation which is one of the major causes of discontent and instability with myths and realities ignored or least understood by the outside world.

Being the largest of all provinces in area constituting 347,056 sq/km or 43.2 per cent of the total area of Pakistan, it is the smallest in population but with the highest demographic growth rate.

Balochistan is demographically and ethnically divided into five major ethnic groups: Baloch/Brauhi, Pashtun, settlers, Hazaras and minorities. Baloch and Brauhi both enjoy similar cultural and religious norms since Kalat Confederacy emerged in 1662 with only language difference as Brauhi is Dravidian. A number of western scholars have certified them as two different ethnic groups, but to me they are one.

Pashtuns are a leading ethnic group living in British Balochistan. Their number nevertheless greatly increased after 1979 when Afghan refugees entered the area. The Afghan migration was predominantly from Pashtun areas though they included a large number of other ethnic groups such as Hazara and Uzbek. The Afghan migration continued even after 9/11. A sizeable number of Afghan refugees migrated from Iran into Pakistan after 1993.

The public at large blamed the federal government, representatives or military rulers for not caring for the development of the province despite its immense geographical importance and natural resources.

Balochistan has far lagged behind other provinces. Punjab is the leading province and enjoys the lion’s share. KPK, despite political grievances and economic problems, is comparatively a privileged province that has an established educational and social structure and a sufficient share in the higher echelons of the military/bureaucratic and other organisational structure of society.

With an ethnic bifurcation between rural and urban population, Sindh enjoys a good share in government/power. Karachi being its port city and a nerve of the economic inflow of Pakistan, has an international importance.

Balochistan experienced very little development under One Unit (1954-1970). Under Ayub Khan, industrial and infra-structural development was made in Punjab and Sindh, nothing in Balochistan. One Unit bred alienation and discontent. The establishment of Balochistan Students Organisation (BSO) in 1967 was a repercussion of One Unit. Its strength grew rapidly between 1967 and 1981 by serving as a nursery for young nationalists. Dr. Allah Nazir who founded BSO-Azad for an armed struggle in Balochistan was a BSO activist. BSO-A was banned by the government in 2013.

The public at large blamed the federal government, representatives or military rulers for not caring for the development of the province despite its immense geographical importance and natural resources. Geography has played perhaps the most important role in shaping Balochistan’s political structure which in public eye is the major cause of its exploitation.

Balochistan has been reeling from powerlessness. The Baloch suffer from a sense of lack of sharing or loss of power in the overall political game. They believe that under both civil and military governance Balochistan has remained the most ignored province with least share in civil bureaucracy, military and politics.

The political crisis that developed in 1973 during the Bhutto government acted as a major alienation factor which made the province very unstable. The 1970 elections in Balochistan were taken as an opportunity to strengthen party and representative politics. Bhutto removed the governor of Balochistan, Ghaus Bakhsh Bizenjo, a democratic and nationalist leader from office and dissolved the National Party of Pakistan (NAP) government on 15th February 1973. He was replaced by Nawab Akbar Khan Bugti as the governor who took oath of office in Islamabad. The next day Mengal cabinet was dissolved.

It is widely believed that had the cabinet been not dissolved, the political crises would not have emerged in Balochistan and later on in the NWFP. The representative system in the country might have been stable without military intervention in July 1977. Political crises developed in NWFP after the chief minister, Mufti Mahmood, resigned in protest.

Balochistan has experienced four insurgencies; in 1948, 1958, 1973 and 2004 (still continuing). The Baloch leaders have been hailed in literature for taking action against power and usurpation of resources. Music, dances and songs serve as cultural vehicles for expressing nationalism in Fanonian terminology. They call for the fight against tyranny and injustice. It is a literature of combat because it moulds the national consciousness, giving it form and contours.

The assassination of Akbar Khan Bugti (1927-2006) on August 26, 2006 in the Bhamboor mountain range of Kohlu gave impetus to the ongoing militancy in Balochistan, particularly Marri-Bugti and Kach/Turbat area. Balochistan Liberation Army formed in 1999 between 2005 and 2006 remained very active in subversive activities in Marri-Bugti areas, attacking gas installations, military and para-military forces, and military and civilian personnel. Balochistan Republican Army, a militant organisation was the ultimate result of that, a shift from political struggle to militancy. Bugti enjoyed a political and social stature of which the Baloch were proud. Being a Baloch sardar, he had served as governor and chief minister of Balochistan.

Among the Baloch, Nawab Bugti enjoyed popularity and was considered a charismatic and traditional leader. In my analysis, Nawab was not intentionally killed but he was brought to a point of no return by being mishandled by those in power. The way he was forced to hide in mountains, killed and then buried unidentified, was shocking. The action later on was justified by president Musharraf himself in public gathering. It would have been better if the Nawab had been taken into confidence and negotiated.

Lastly, demographic factor inter-related with ethnic nationalism is regarded one of the alienating factors in Balochistan. It fans Baloch nationalism and militancy. They seriously believe that since 1947 they have gradually been converted into a minority. Baloch (including Brauhi) constituted majority at the time of the creation of Pakistan, but due to settlement of people from other areas of Pakistan, refugees from India, and Afghan refugees in particular, the Baloch population has been reduced to minority.

The major change resulted after 1979 with the huge influx of Afghan refugees. Balochistan became second province after NWFP/KPK to receive the largest number of refugees. Exact number of refugees was not recorded but an estimated 1.5 million came here during the prolonged Afghan war.

The immediate impact of the influx was the sudden change in the demography of the province. The Afghan refugees, majority of whom speak Pashto and could easily intermingle with Pasthun in language and culture, added to numerical overwhelming of Pasthun population against Baloch -- a major source of frustration for Baloch. That is why Baloch nationalist parties oppose the forthcoming census in province and claim that those entering province after 1979 be not included in the list.

Similarly, the mega project of China Pakistan Economic Corridor (CPEC) is perceived as a major transfer of Baloch rights and resources to outside elements. The people of Makran division where Gwadar port was initiated fear to lose their identity after the project becomes functional. Consequently, the growing Chinese involvement in Balochistan after 2000 is taken by Baloch nationalists as "Chinese Imperial Designs" to strengthen their quest for power and wealth against the US and Russia.

China is involved in Balochistan for the exploration of a number of projects including Saindak. To them, Balochistan has a lot for China, but in return what China has for the province where indigenous people can benefit, is still unknown. They are distrustful of future assurances for the development of necessary infrastructure of Balochistan by the federal government or China. They perceive the raising of Special Security Division as protection force as addition to already growing deployment of army on the Baloch soil.