At a time when mob lynching has become a brutal pastime, the role of the media becomes crucial in ensuring that facts are presented and no quick judgements passed 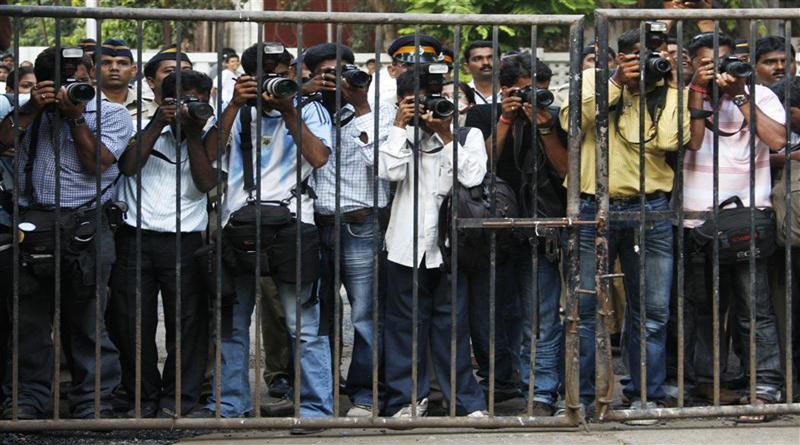 A half-bent woman is looking around for help as a man pulls her sari away and the crowd around merely watches. This image from a Bhojpuri film went viral on Facebook a few days ago to show how Hindus were under threat in West Bengal. Despite it being established as fake, the person who posted it did not take it down. Before that a "photoshopped" image of the Kaaba had triggered off a spate of rioting in Basirghat in West Bengal.

The news website, Alt News, aptly describes itself as "Alternative News and Views in the Post Truth world" and that is the world we seem to be living in today. It is sometimes far removed from even a pretence of truth as the meticulous Alt News reporters who investigate how news is manufactured, often find.

It is news websites that seem to be saving the day for the Indian media and a handful in the print medium. NDTV, which had taken a strong line during the Gujarat riots of 2002, and one of the few TV channels which stood up to the current government, was finally subject to raids by the Central Bureau of Investigation in June, based on a private complaint.

The media in India cannot all be tarred with the same brush, of course, but the reality is that a large section of it -- already weakened by corporatisation and downsizing -- seems to be operating under an all pervasive chilling effect. The massive retrenchment of journalists in the big media houses in the recent past has left few reporters on the ground. The end result is that field reporting, which is the backbone of the news media, is seriously impacted.

Manufacturing consent has gone a step further and led to a situation where the headline is all that matters. A senior politician told me recently, "News today is all about headline management!" At a time when mob lynching has become a brutal pastime, and communal riots are being provoked by fake social media posts, the role of the media becomes crucial in ensuring that facts are presented and no quick judgements passed.

For some time now, news has been replaced by views, fact by opinion and raucous voices in tv debates and social media drown out the sane.

There have been some sharp condemnations of mob lynching and opinions voiced against it but the articles that contextualise the situation against the ethos of a Hindu Rashtra are few, a recent one being Manini Chatterjee’s article in the Telegraph.

Has Indian society changed from a seemingly eclectic, liberal, anti-communal one to a bloodthirsty, anti- secular mob? And is that what is now being reflected in the media’s approach to covering issues? There is little doubt that we are embracing a majoritarian approach in many aspects and the lynch mobs, which emerge from nowhere to kill and maim suspected beefeaters and cattle traders seem to have carte blanche.

In this scenario, the print and online media and some exceptions on tv have been reporting events, raising questions and demanding strong measures but, unfortunately, social media and television have only added fuel to the fire and inflamed passions for the most part. The media in some cases has resorted to evasion and refrained from calling a spade a spade.

The incident at the prestigious Jawaharlal Nehru University (JNU) in 2016, where sedition charges were applied to some students, is a case in point. Doctored videos were aired on some channels without verification to implicate the students and the image of JNU as a premier institution was tarnished by a virulent but convincing campaign in popular media that it was, indeed, a nefarious institution breeding anti-nationals.

The fear of being anti-national has become quite real, though who or what is really anti-national is open to interpretation. Facts are a casualty in this manner of news presentation, especially on social media and TV where little is verified. After the Amarnath Yatra was attacked on July 10, resulting in the death of several women and injuries to many others, news channels implied that liberals, i.e., Arundhati Roy and her likes, must move aside and let the army do its job.

Some TV anchors seem to closely identify with the security establishment and when tensions between India and Pakistan reach their periodic highs, they can be seen wearing flak jackets in the newsrooms.

Read also: "A society with a history of openness to all faiths cannot be changed so easily"

For some time now, news has been replaced by views, fact by opinion and raucous voices in tv debates and social media drown out the sane. Dissent has become equally precious and the recent "Not in my name protests" in several Indian cities and abroad, despite all the criticism, were a spontaneous expression of people who have had enough of mindless violence and little action against the culprits.

The print media maintains its decorum and by far has performed creditably for the most part but not all of them examine or critically appraise government policy or functioning. The reach of print is limited and news or fake news proliferates from unchecked sources and, WhatsApp has become a gospel.

There is little accountability of the sources as a result. The media is not filling in for a weak opposition and the Congress continues to be under the lens for scams and open to being bludgeoned. The current government in its third year is sailing on fair winds, unperturbed by trenchant criticism.

Journalists are apprehensive and tread on eggshells for fear that that they can be in the firing line for dissent or exposures, contributing to the chilling effect. In a first, the Economic and Political Weekly, which has published articles and editorials critical of many policies and actions of the government, was served a defamation notice by the Adani Group after it published articles related to crony capitalism, i.e., the government favouring the business house, leading it to making a profit of Rs500 crore.

Survival in this post-truth world can come at a price and now more than ever, we must be prepared to pay it.