Remembering Lala is hard -- the loss too recent, the pain too deep and personal, the void too big to be filled 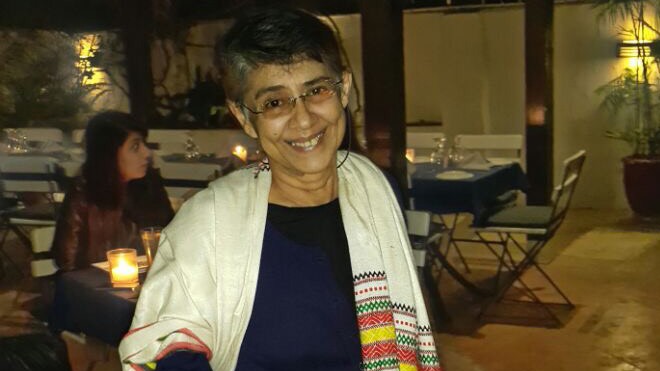 How does one even begin to write about Lalarukh -- the artist, the indomitable WAF activist, the lover and promoter of classical music and dance, the impassioned preserver of heritage and history? And on top of all this, a gentle, caring and sensitive soul, fiercely loyal to friends despite being, simultaneously, an extremely private and reserved person.

With so many different dimensions, all intertwined deeply with one another, Lala is not easy to capture in a short piece.

Remembering Lala is hard -- the loss too recent, the pain too deep and personal, the void too big to be filled. Saying goodbye to her is the hardest thing that many of her friends have had to do in a long time.

Out of all her myriad dimensions, the one I am most familiar with is her WAF activism. An unflinching socialist feminist, Lala was a lifelong crusader against all forms of injustice and discrimination against women, religious and ethnic minorities, workers, peasants, and countries devastated by imperialist aggression. She combined her interests in art and activism to express her anger, indignation and pain in the form of posters about violence against women resulting from patriarchy, capitalism, imperialism and the state.

Lala was considered one of the diehards of the women’s movement for her refusal to compromise, her obstinate and persistent tendency to stick to her ideology, and her refusal to budge on principles and values espoused by feminism.

Some of us occasionally felt exasperated because of her seeming inflexibility which stemmed from her unwavering commitment to the principles of feminism and the women’s movement. This is what made her so indispensable for she was a constant reminder of the original principles on which WAF was created.

She lived her feminism. It was not just political, for her it was equally personal. Whenever a friend or anyone else was in trouble, Lala gave such enormous support, encouragement and hope that at times one wondered where she got so much strength and time, energy and fortitude because she was a very busy person with multifarious commitments.

Lala’s simple but beautiful studio on Macleod Road, where she practised her art and experimented with multi-media, became a casualty of the Orange Train. It was demolished in front of her eyes.

When I was struck by illness last year, Lala had my back. She not only provided immense support and care herself, she even mobilised many others who stood by me so staunchly that I often attribute my recovery to the overwhelming support I got from WAF, thanks mainly to Lala and feminist friends.

Yet, she was a quiet, shy, deeply private person who seldom shared her own sorrow or loss. It is interesting how she was such an amalgam of opposites -- passionately political, yet shy and retiring; quiet and unassuming, yet speaking loudly, radically and clearly through her work. A stoic personality who seldom shared her own deep feelings and focused consistently on the other, Lala lived her socialism and feminism on a daily basis. Exceedingly simple in her lifestyle, she shunned consumerism -- dressed simply in her signature jeans and T-shirts, drove a small car and lived in a modest house.

Lala’s simple but beautiful studio on Macleod Road, where she practised her art and experimented with multi-media, became a casualty of the Orange Train. It was demolished in front of her eyes.

She protested vociferously against capitalism and imperial aggression against Afghanistan and Iraq, marching steadily on while chanting slogans and singing movement songs. A strong supporter of the Rule of Law movement, she would stand on mall every Thursday in solidarity with the lawyers as they protested. I remember vividly when in 2008 she and I travelled together with the Long March from Lahore to Islamabad. Throughout the way she danced, something she loved to do, to my silly protest songs that I made up against the Musharraf dictatorship and his lackeys in the form of PML-Q. We were put under house arrest in November 2007 for protesting against the attack on the judiciary and spent our time enjoying political humour and jokes, and singing political songs that we made up then and there.

Lala was also very involved with the labour and workers’ movements, especially in the early years of WAF when women workers were dismissed from Wyeth Laboratories and Lala was the first one to reach out to them in solidarity. Her links with labour unions were strong in the early decades and she marched on the streets with the unions every May 1 for many years.

When it came to her love for classical music, inherited from her father the late Hayat Ahmad Khan, who established the All Pakistan Music Conference, she was again a diehard lover and a purist. She couldn’t tolerate modern mixing techniques that destroyed the essence of so many raags and classical forms. She believed in long and patient training and the discipline of classical renditions and traditions.

She enjoyed popular culture as a part of the movement, but when it came to performance she wanted perfection, control, discipline and purity of form.

With a strong aesthetic sensibility, she hated the destruction of any form of beauty, art, architecture, music, dance and literature through vulgarisation.

Lala protested vigorously against the proposed demolition of the Lahore High Court building as well as Tollington Market and other iconic structures in Lahore. But it was the Orange Train Project that broke her heart. Lala’s simple but beautiful studio on Macleod Road, where she practiced her art and experimented with multi-media, became a casualty of the Orange Train. It was demolished in front of her eyes and she watched as a historical milestone close to her studio, showing the distance to Delhi and Amritsar, was mercilessly dug out and history erased.

Lala never really recovered from the destruction of her quiet and peaceful little corner where she could create and set her rich imagination free.

It was in this little corner of her life that she created her now world-renowned pieces of art. Her work was displayed in Greece, Germany and at the most prestigious art galleries and exhibitions in the world. Rave reviews poured in defining and praising her as one of the pioneers of minimalist art in Pakistan. Her ability to say so much with so little was unique and unparalleled. She combined her art with her activism and music. She painted music that one could almost hear in her art work.

Lalarukh, you can never really leave us for we have all that you created and left behind. We will surely miss you but you are still among us in our hearts, memories and our struggle.

Rest in peace my dear, we love you.