Imran Khan and the big egos 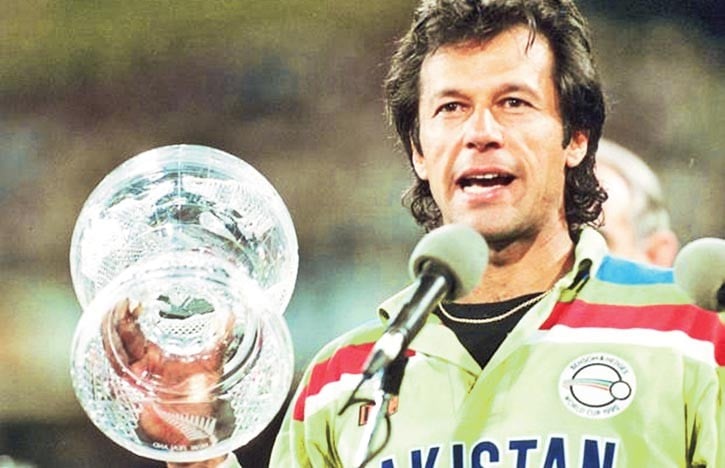 Everyone praised Imran Khan when he led Pakistan to the victory stand in World Cup 1992. Everyone showered loads of praises on the team, especially Imran Khan. Even Prime Minister Nawaz Sharif honoured the champions and showered them with gifts.

Jahangir Khan’s winning streak of 555 matches was a bigger athletic feat but still no one could deny the height of the nation’s jubilance following the World Cup victory.

Led by Sarfraz Ahmed, Pakistan entered the tournament as the lowest ranked side but stunned everyone with the title-winning triumph.

The 1992 team and the current team had a lot of similarities. Both struggled initially and were considered underdogs. And yet they eventually clinched the titles.

There has been a debate whether the Champions Trophy triumph under Sarfraz is bigger than Imran’s 1992 victory. Previously, Pakistan’s World T20 Championship victory in 2009 was compared with the 1992 triumph.

Such comparisons have one thing in common -- Imran Khan. Facts and figures have wrongly been employed by renowned writers to undermine Imran’s achievement in Tests as compared to Misbah-ul-Haq’s.

Halfway through the tournament in 1992, Pakistan were nowhere in the run for the title. And then Imran came out in "cornered tigers" t-shirt inspiring his teammates to bounce back.  Pakistan went on to win the World Cup. Later the players of the team told tales of his motivational speeches.

Yet, do we need to compare this victory with that of 1992? Is it necessary to compare Imran with Misbah or Sarfraz?

When PCB Chairman Shaharyar Khan said that Misbah’s feat was bigger than that of Imran, he was vehemently criticized. PCB had to release a clarification that Shaharyar was misquoted.

Had Imran Khan remained only a successful former Pakistan captain then today we wouldn’t have to see such comparisons. But Imran Khan is known not only as a World Cup-winning captain. He has become a bigger figure. He is in headlines almost every day in Pakistan as he is one of the strongest politicians in the country. He leads the third largest political party in the country.

There have been few people in the world who have excelled in one field and gone on to become successful politicians.

His role as a politician must have made him a thorn in the eyes of many commentators. It may not have been going well with their egos. His name is mentioned whenever some Pakistan players achieve some feat.

His Test statistics as skipper are compared to Misbah’s. People say higher percentage of drawn matches shows Imran was not an aggressive skipper when compared with Misbah. It must have been true if they had captained Pakistan in the same era. But they didn’t. ICC has made strenuous efforts to make Test cricket more result-oriented in recent decades. ICC should have been adjudged the winner.

What is more important is the win and loss ratio. Imran is a clear winner with 1.75 against Misbah’s 1.36.

We need not compare anyone with former players. We will get nothing out of it. Current players could be compared critically to decide who should get to play for the country and who should not.

Imran Khan and the big egos