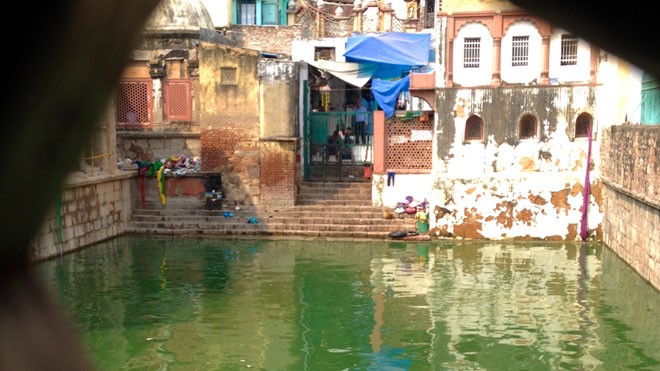 I always imagine the Delhi Gate in Lahore and the Lahore Gate in Delhi to be linked portals. I fantasise about walking through the gate in Lahore and ending up in Delhi. It feels that way, too.

Delhi and Lahore have a relationship akin to that of two sisters torn apart by a catastrophic family episode. Having resided in both the cities, I’d like to think of myself as being qualified enough to evaluate what these cities have to offer. Due to the overarching similarities between the two, it is quite easy to tell that the same mother gave birth to the sisters. Alas, sisters can’t be replicas, so it also becomes easy to pinpoint their respective characteristics. One sister turned out to be taller and the other one was blessed with silky hair. Just like how the Badshahi Mosque is in Lahore and New Delhi has an abundance of stray dogs.

During the 1947 partition, art was the one bridge -- between Pakistan and India -- that wasn’t demolished. In my first week in school, a classmate approached me asking about Pakistani television drama serials, leaving me in awe at her extensive knowledge about Pakistani actors. Considering both cities consume the same media (Bollywood movies and Pakistani dramas), it’s a given that they understand each other’s language. The oral language of Lahore and Delhi is identical with a sprinkle of some classic Sanskrit words in Delhi and some poetic and Persianised Urdu words on the tongues of Lahorites. Lahore leans towards a more Punjabi culture with Punjabi lingo often heard on the streets, while Delhiites fall back on English to upskill towards contemporary culture.

Contemporary culture brings me to my next matter regarding the vantage point on modernity, which becomes more interesting when you also compare class. The inequitable distribution of wealth is equally perturbing in both cities. The World Bank data shows that in 2011, 7.9% of Pakistan’s population lived at USD1.90 a day compared to India’s 21.2%. However, that same year, 36.3% of Pakistani population fell under national poverty lines juxtaposing with 21.9% of Indians. This leads us to believe that Lahore has less extreme poverty but has more poverty overall. Delhi and Lahore seem to have an equal amount of beggars but the dwelling places of beggars in the former is right next to some roads and the austere condition can be vouched for by any passerby.

The curious thing about the people included in the percentages in both cities is their way of thinking. The under-privileged in Delhi work hard to learn English and they thrive in western clothing. Yes, there are a few women who still prefer saris and toe rings over t-shirts and jeans, but it is a rare day in Delhi when I see a man wearing his traditional kurta shalwar.

My encounter with an Indian maid allowed me to enquire about her children’s education, and she proudly told me that she had sent them to an English medium school. On the other hand, the Lahorite women stick to their good old kameez and dupatta and most men wear shalwar kameez with pride. This difference puzzles me. Are the Lahorites too adamant? Are the Delhiites too influenced by the West? Maybe I’m asking the wrong questions. Are the Lahorites more rooted? Are the Delhiites more adaptive?

Contrastingly, the ruling elite of both cities are on the same page. The well-off travel to exotic locations and have mouthwatering meals. They enroll their children in the best schools and pretend that they have trouble speaking Hindi or Urdu. Anything besides a high-end brand is not good enough to wear, and showing skin is a sign of high status.

However, there is one fashion item that no one in Delhi forgets: pollution masks! Pollution levels are exceptional during the winter in Delhi, and schools close due to the unhealthy smog.

Considering the modernity, even the Richie Rich of Lahore is respectful enough not to do extremely unorthodox things in front of the public. With Islam being the dominating religion of Lahore, and Delhi having 81.68% Hindus, 12.86% Muslims, 3.4% Sikhs, 0.99 % Jains, and 0.87% Christians, the number of taboos in Lahore is much higher compared to Delhi.

The stares of men and frowns of women are ample in both cities, but somehow New Delhi is more open-minded as a whole. Maybe it’s the women driving scooters/motorcycles, and wearing what they please or maybe it’s the cosmopolitan environment.

You often tend to interact with foreigners and familiarise yourselves with a variety of cultural and ethnic backgrounds. Irrespective of this, Delhi ‘walay’ lack one thing: the sweetness in their voice when they invite you over. And that is exactly what’s abundant in Lahore. When an outspoken Punjabi, ‘Lahori aunty’ offers you food, you have to eat. There is no going around it. New Delhi lacks that sugar, and is instead filled with artificial sweeteners. Delhi resonates open-mindedness while Lahore resonates openheartedness.

It’s time to compare the most critical, crucial, and concerning business: Food. Due to being a die-hard food enthusiast, I can’t pick a winner. The Lahori nehari and paye have me daydreaming. But the chholay bathuray of Delhi are unmatched. How can you possibly pick from the delicious halwa puri in Lahore to the succulent rasmalai available in Delhi?

These two cities are the kings of street food, but they also have chic and international restaurant chains -- in Khan Market (Delhi) and on MM Alam Road (Lahore) -- to appease the new generation. Nonetheless, the flavours of both Old Delhi and Anarkali are something that our ancestors and our descendants will appreciate.

It’s easy to tell why the Mughals had a deep-rooted attachment with both cities. Who can resist the exasperating hot spells and the beat down of monsoon rains? Despite seeing a dozen men relieving themselves in secluded spots in one car ride in Delhi, or pretending the blares of rickshaws are music to one’s ears in Lahore, I wouldn’t hesitate to say, ‘Yeh shehr nahi, mehfil hai’ (This isn’t a city, it’s a courtly entertainment) regarding Delhi, and ‘Jinnay Lahore nai vaikhya, o jameya nai’ (You aren’t born if you haven’t seen Lahore).

This article was published in The News on Sunday on July 9, 2017 under the title The relationship between Lahore and Delhi.