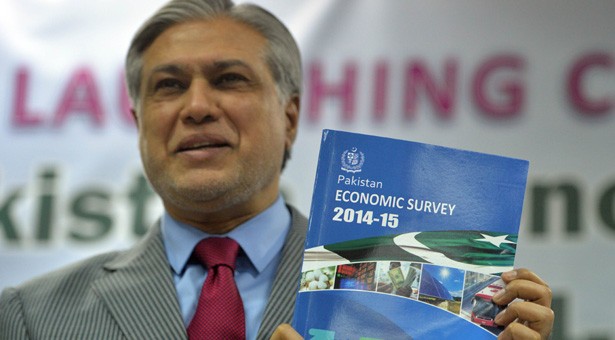 The progress and achievements Finance Miniter Ishaq Dar boasted of while presenting the Economic Survey 2016-17 and the budget reminded me of the following joke that I had heard in a management training a few years back:

"A man went to a jungle and was surprised to see that on each tree there was a small circle and with an arrow hit right in the centre. He was impressed by the absolute precision. As he walked a few more steps into the jungle he met a young boy whom he asked if he knew the person who had done the feat. The boy said it was him who had done that and that there was nothing to be surprised about. He said he first hit the arrows and then made circles around each on the trees."

Actually, this is how generally departments and organisations celebrate achievements on completion of each fiscal year. In Pakistan, usually political governments initiate some symbolic mega projects and keep highlighting them in the media as unmatchable and outstanding initiatives which their predecessors could not take. They also play with key economic indicators to show up the positive growth despite no evidence for the improvement in manufacturing, agriculture and exports, etc.

However, whatever is claimed, it rarely brings any positive change in the quality of life of people, especially the 33 per cent population living below the poverty line.

If we review the global progress on various international rankings which are assessed on a standard set of performance indicators each year, the status of Pakistan is extremely depressing. The summary table of the some of the selected ranking reports points to wherever we stand.

We pick the example of Human Development Index as it directly measures the effects of development on the general public, the country’s score is almost static and ranking down from 137 (HDI Report 2005) to 147 (HDI Report 2016) during the last decade.

The political culture in countries like Pakistan revolves around individual leaders who people expect to do miracles once they come to power. They don’t understand that sustained developmental objectives need continuous teamwork through institutions instead of political motives.

The major issue with the management of state-driven development initiatives in Pakistan is lack of a coherent approach towards its planning and management. In the last few decades, performance management models have been evolved and refined which emphasise to measure the progress based on the outcomes instead of the means. In most of the developed countries, structured approaches have been useful in achieving milestones with optimised results as per the approved development agenda in an organized manner.

The political culture in countries like Pakistan revolves around individual leaders who people expect to do miracles once they come to power. They don’t understand that sustained developmental objectives need continuous teamwork through institutions instead of political motives.

The role of political leadership is to determine the direction, development agenda and setting priorities as well as oversight of the management. The management needs honest, professional, competent and empowered bureaucracy.

With the assumption of political support, in my opinion, there are a few things to be taken up seriously to pursue the roadmap of sustainable development in Pakistan.  These are:

A comprehensive and uniform performance management approach should be defined, developed and implemented across the board in government institutions. In line with the overall approach, ministries/departments’ level Performance Management Frameworks which are logically mapped with World Development Indicators should be developed describing the clear responsibilities as well as frequency of performance reporting. The performance management unit should be set up in each ministry and the provincial department to collect and analyze data and produce reports that help to take corrective measures and appropriate decisions.

Keeping in mind that the degree of transparency indicates the culture of accountability, the scope of e-governance which is currently limited needs to be significantly enhanced. A dashboard based on key indicators should be developed and placed on the websites of the ministries and departments at federal, provincial and district level. It should be strengthened and maintained through an integrated GIS-MIS which will help magnify the geographical areas where the attention and remedial actions are immediately required.

Such arrangements not only will facilitate the timely corrective measures but will also enable the federal and provincial committees to oversight the performance of their respective ministries and departments. Such arrangements will bring a continuous refinement in planning processes. In addition, it will also empower civil society institutions to exercise Right to Information for acquiring details on development reported in their areas resulting in improved government functioning and curbing the corruption etc.

In addition to the universities, key professional training and capacity development institutions should develop project management courses suited to functioning of effective governments.  Specifically, they should focus on pro-people inclusive development, transparency and accountability, result-based management, risks assessment and mitigation strategies and the management of knowledge based on action researches.

The planning processes ensure integration of learning experiences and best practices tracked in the previous year. Similar processes should be adopted while developing budgets and allocating resources appropriately.

What gets measured gets managed --  Peter Drucker