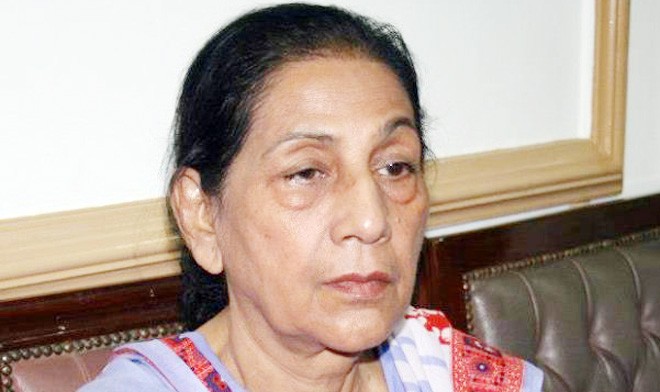 When I met Nasreen Anjum Bhatti for the last time in April 2015, she was virtually on a deathbed. Cancer had spread and she was in extreme pain and agony. She was not interested in talking about anything else except her adopted son Salman -- "Eh maira puttar ay Golu" -- who had travelled from England to be on her side. Her brother and sister were there too who wanted to take her to Karachi, where, they believed, the provincial government of Pakistan People’s Party will be kind enough to help them in financing her treatment. The same Party she remained loyal to till the end. Her emotional bond with Zulfikar Ali Bhutto remained irrationally romantic.

A few weeks after that final meeting, I wrote The Rebel Stylist, published in the May 10, 2015 issue of this magazine where I reviewed her Punjabi books -- Neel KaraeaaN NeelkaaN (1979; reprint 2003) and Athay Pehr Tarah (Sanjh, 2009).

In that review, I wished she could recover and write poetry with an air of nonchalance -- "She is an undisputed stylist. The only limitation I found is the constant repetition and monotony of thought. What a treat it will be if one day she can come out to bless us with her lyrical poetry born out of insouciance".

And here she is with Shamlaat published posthumously by Sanjh, Lahore.

The manuscript of Shamlaat was finalised by Nasreen herself during her lifetime. So everything that’s included in this book carries her full approval. John Berger once wrote, "What we mourn for the dead is the loss of their hopes."

While in Nasreen’s case, we are mourning for ourselves because it is loss of our hopes too.

Shamlaat (The Commons) referred during legal proceedings related to rural Punjab as Shamlaat-e-Deh (The Village Commons). Shamlaat is the land held in common by the whole village. Nasreen used it as a metaphor not only for the womenfolk but for the entire suppressed classes.

I, however, failed to comprehend why she translated Shamlaat as "No Man’s Land", while recording her title poem for Umang (a community for poetic expression and dialogue in South Asia). It was then used as it is by the editors not only as title of the video but part of the translated poem too, adding further confusions to the already available poetic complexities.

There is a deep sense of loss and grief composed in many of her poems and in such moments, she grievously calls on Shah Hussain: "Ainwin gai vehaa Hussaina/ Kiss nu saanjh sahaila juDya."

(Dada, I am the commons, your grandchildren’s hidden defeat / all of us sisters and brothers are vassals to drudgery/ the cool breeze no longer blows at the well/ and the water wheel’s cups don’t clang either / flour isn’t milled, nor butter ghee churned, and no hunger felt anymore / what did you bury in the foundations that they never flourished /Baba, I am the daily bread, not the serving plate that will give an account of a lifetime / Bring your hookah and sit on the bed, and write -- this is a note of refusal / Baba, Dada, I am not the platter that remains sitting on a shelf / I am but a shadow of a tulip under the bed, on whom brown ants crawl from all over/ hurrying this way and that / taking something of me every time /…we too left the platter, at the mouth of the canon / it included the dough for missi rotis / and the lump of dough had fingerprints on it, even that of the ringed finger / since that day these brown ants have not let me alone) -- Translated by Waqas Khwaja.

There are 43 poems in total included in Shamlaat. The book opens with a devotional poem ‘Bhait’ (The Secret) where Nasreen is confiding in her ‘Rabb’ in a soulful, tender, soft, and humble tone that is filled with admiration of a believer: "Rabba Sohnia! JaduN assiN kallay honday aaN taaN ghaNi chupp kioN lag jaandi ay…Bhait eh kee ay/Surrat da ohla lahweeN jayker/ tohee Rab Rahman!"

There is a deep sense of loss and grief composed in many of her poems and in such moments, she grievously calls on Shah Hussain: "Ainwin gai vehaa Hussaina/ Kiss nu saanjh sahaila juDya." This sense of loss and defeat contrasts with her earlier poems in her last two books that were riveted with rage of rebellion and resistance of a street fighter. Here she consciously invokes the metaphor of sheep symbolising weakness in following lines: "Is this our life? / Walking silently behind our killers like sheep/Let’s admit that we are the mindless sheep".

Even in her last book Nasreen primarily remains a poet of split lines. A few poems of the current book are quite poorly crafted and thematically redundant. Those poems lack a stamp of her authentic style, intensity, grandeur, and diction. Then imlah errors and proof reading mistakes at some critical junctures do not help either.

However, there is one line in this book that transported me to a different poetic space with its unique tone, texture, and trance. This is the power of poetry, where even a single line can impact you the way it did. It is the best line of the book because other fascinating lines of her worth-reading poems simply reaffirm what Nasreen had already exhibited in her previous two books. But this line is unique as it seems to have been born out of that much-needed insouciance. Let’s relish it by reading one word at a time: "MithDi rutt, tarsaindiaaN bullhaaN diaaN JhareetaaN" (Sweet season, booming with scratches of our longing lips).

Nasreen Anjum Bhatti was an amazing person and a unique voice who never found peace in her lifetime. She was a glowing symbol of literary resistance and liberation filled with pain and pride: "Ha’ay Rabba! Watt jamman hosi? /JamsaaN soolaaN Vaanguñ!"