The idea of Karachi 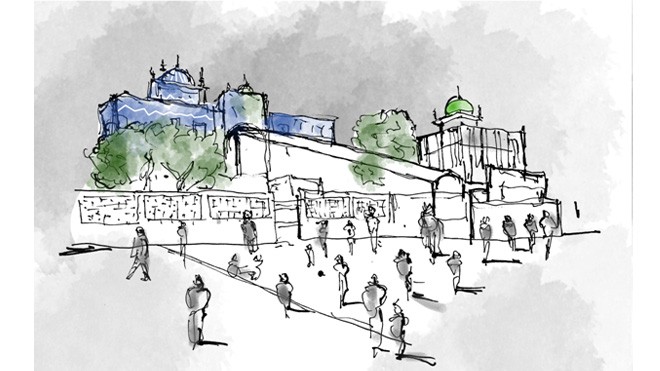 Karachi is a diverse city full of multi-cultural activities and numerous traditions. Urban development in Karachi has transformed drastically, with the emergence of high rises that were once scarce in the city. Modern high rises are now competing against traditional buildings. The overpowering presence of these buildings has made a large social impact.

For instance, the Bahria Icon Tower, situated in Clifton right beside Abdullah Shah Ghazi Mazar, is one of the most famous landmarks in Karachi. One can note the dominance in this building; it would be more appropriate if the building had complemented the context rather than change its language. Placing a modern icon besides a historically iconic symbol negates the essence of the Mazar, forcing it to lose itself under the modern structure of Bahria Town and creating an alteration in activity since its construction.

The architectural language of Karachi has always been identified by its colonial buildings, built by the British before independence, but does it belong to us? Is that our architectural identity?

Various questions arise when defining the architectural language of the city which is gradually changing. Increasing competition with world class cities creates a class difference amongst the rich and poor. Today, we can see a vast change in the quality of spaces. For instance, the Mohalla system existed in houses where interaction was greater and more informal. Today, isolated spaces are being created because of the increase in apartment construction. Gulistan-e-Jauhar has become the "graveyard of apartments" due to the surge of these building and the rising population.

The Mohalla system existed in houses where interaction was greater and more informal. Today, isolated spaces are being created because of the increase in apartment construction.

Streets can also be experienced as an integral part of our city. The modern street dominates our communities with the ebb and flow of commuter traffic and pedestrian movement. The street provides a link between buildings, within the street as well as in the larger urban context. As a connection, it facilitates the movement of pedestrians, vehicles, as well as goods. Streets also provide access to residences, commercial buildings and parks. This zone assumes the character of a true communal area where the average citizen spends most of their time. However, the streets are gradually being taken over by encroachment, lack of organisation, and pollution.

Karachi has become a vehicular city versus pedestrian city; looking back at what the modern masters proposed, we can understand why this happened. French-Swiss architect Le Corbusier’s "Contemporary City" consisted of high rise structures and freeways, built vertically. Frank Lloyd Wright’s "Broadacre City" was a futuristic city with highways and flying vehicles. Although both these cities were formally planned in the 1970s, and Karachi’s growth has been organic, the cities have several similarities with Karachi.

The idea of modernity is most similar -- vehicles have more power than pedestrians and we are rapidly moving towards vertical living. I think we are losing out on several things, making our lives complicated. Isn’t the ideal situation a balance between modernity and tradition?

Karachi has been popular for its shopping and cultural cuisine; Burns Road has become a street icon for food and Tariq Road for retail. Both are a part of our tradition but the rapid increase in development of shopping malls has overtaken the long-standing retail streets. These malls are designed as introverted spaces housing many facilities within one building.

A healthy, balanced environment is required in the city. While Dolmen Mall is a prime example that caters mainly to the high-end market, a large majority still visit traditional areas such as Empress Market. There is a vast difference in the environment of both places. The architectural language of Empress Market witnesses colonial style construction from the British rule. This was a market place for locals as well as foreigners. Today, no attention has been paid to its maintenance or renovation. Whereas, Hyper Star Supermarket in Dolmen Mall provides a pleasant, air conditioned atmosphere. But, is this what we call a traditional market place? Or, is there a separation of classes even in market places. Why can’t the characteristics of both market places be amalgamated?

Observing multiple buildings and their cultural fabric in Karachi, I think their architectural language is composed of two extreme approaches. The building is either modern or purely traditional; there is no middle ground where they share similarities. The idea of critical regionalism is to be conscious and critical about the architectural style implemented and create designs that carry the essence of both extremes.

Pakistan demonstrates various layers of architecture styles, including traditional as well as modern, maintaining their own character and essence. The social and cultural fabric varies in both. It is important to understand and analyse its social and cultural activity which may lead us to answer the question of critical regionalism in Pakistan.

We face a serious identity crisis regarding critical regionalism which is subjective and can be argued. Several architects have changed their philosophy since post modernism, and most countries now follow the West without any understanding of the context. Buildings are constructed to look aesthetically pleasing and raise money and they forget to expand or promote traditional architecture.

Unfortunately, the argument of modern and traditional design will remain until we drastically alter our thought process.

The idea of Karachi