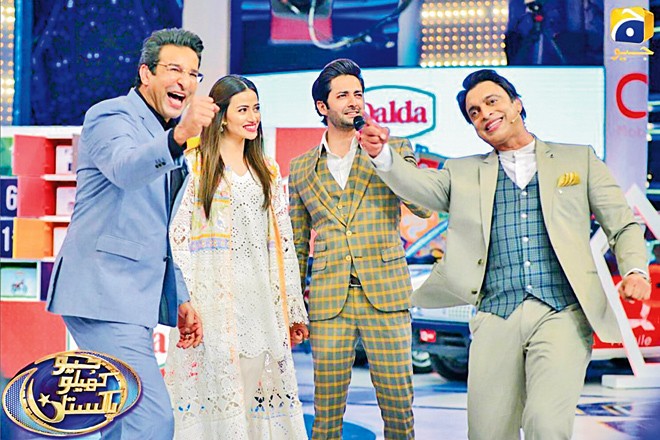 Eid-ul-Fitr is right around the corner and we are just one week away from the release of several prolific films. While promotions of two upcoming films are in full swing, followed by their respective premieres, other projects have also appeared on the horizon. Instep rounds up the hot and happening activities held last week.

Hassan Waqas Rana’s long delayed war saga Yalghaar finally saw the light of the day last week in Islamabad. With an all-star cast that includes Humayun Saeed, Shaan Shahid, Adnan Siddiqui, Gohar Rasheed, Ayesha Omar, Bilal Ashraf and Armeena Rana Khan, it is touted as one of the most expensive films to be produced in the country. At the Islamabad screening, several key stars from the film were conspicuous by their absence. Those who attended the event include actors Adnan Siddiqui, Humayun Saeed and Ayesha Omar, who looked stunning in a Faraz Manan couture number.

Cast of Mehrunisa
V Lub U on a promotional tour

Starring Danish Taimoor and Sana Javed, Yasir Nawaz’s romantic drama Mehrunisa V Lub U will hit cinemas across Pakistan on Eid-ul-Fitr. The film’s promotions were in full swing the entire past week, beginning from Karachi, followed by Lahore and Islamabad. The cast and crew visited malls, cinema houses, food outlets and other public places to meet the press as well as fans where they talked about the film. As part of the promotions, the cast appeared at the game show, Geo Khelo Pakistan hosted by legends Wasim Akram and Shoaib Akhtar. The film’s premiere was held in Karachi last Friday with the cast and crew in attendance.

Touted as Pakistan’s first superhero film, Project Ghazi stars Humayun Saeed, Sheheryar Munawar, Syra Shahroz and Adnan Jaffar in pivotal roles. The film’s trailer launch was recently held in Karachi and received mixed reviews from the press. While it is refreshing to see a new genre making way to local film landscape, the trailer looked more of an action movie than a superhero project. Directed by Nadir Shah and produced by Ali Raza, the film has been shot in Pakistan and is expected to come out on July 14, this year.

The trailer of Nabeel Qureshi’s much anticipated comedy drama Na Maloom Afraad 2 is out and it looks quite promising. Starring Fahad Mustafa, Mohsin Abbas Haider and Javed Sheikh, who will reprise their roles in the sequel, the film is a comedy about the three lead characters, who are tangled up in a robbery. Na Maloom Afraad 2 also features Urwa Hocane and Hania Amir in pivotal roles. The entire cast showed up at the trailer launch (except for Urwa Hocane), and that too on time. Mehwish Hayat, who is not part of the film, also came to support her friends and co-stars. Produced by Fizza Ali Meerza and Mehdi Ali, the film is slated to release on Eid-ul-Azha this year.