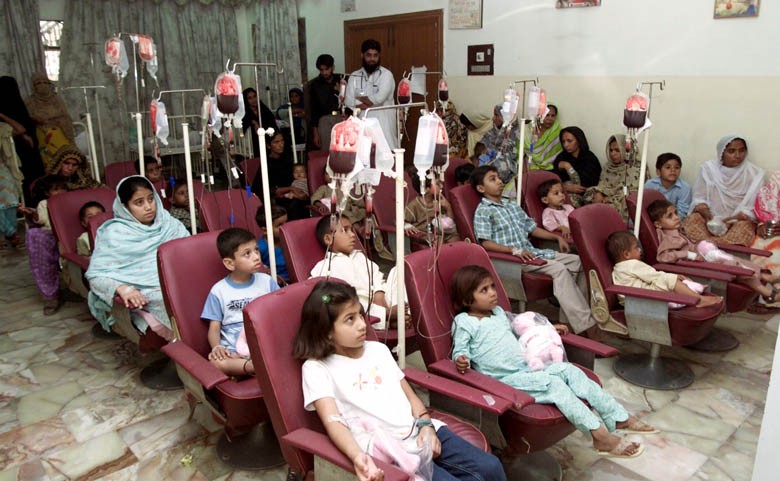 Kashif Iqbal Thalassemia Centre (KITC) situated at Dalmia Road, Karachi, was established in 1996. Since then it has expanded to Lahore, Badin, Nawabshah, Faisalabad, Rawalpindi, Rahim Yar Khan, Larkana, Abbottabad, Bannu, and Haripur and is at present catering to more than 3000 children.

"This costs around 30-35 crore annually and it all becomes possible through charity and philanthropy," says Muhammad Iqbal, the person who started this centre and is running it for the last 21 years. "At our centres we try our utmost to accommodate every new patient," he says.

A personal tragedy lies behind the establishment of this centre. Kashif, after whom the centre is named, was the only son of Iqbal who was diagnosed with deficiency in blood at three months. He was born on October 23, 1980. When he was three months old, the parents realised he was not taking proper milk and his complexion had become pale. They consulted a doctor who told them Kashif had deficiency of blood in his body and that his hemoglobin (Hb) level was 4gm/dl at that time while a normal infant of his age was supposed to have 11gm/dl Hb level and above. That is how Kashif received blood transfusion for the first time in January 1981.

"A pediatrician advised me and my wife to have our blood tests done. We learnt we were both carriers of Thalassaemia minor as a result of which Kashif was born with Thalassaemia major, of which there was no treatment. It was just the beginning of the torment," says Muhammad Iqbal.

"Kashif would get blood transfusion every 15-20 days which went on for 14 years. Despite regular blood transfusion his condition kept worsening. It was when his serum ferritin test was conducted that we came to know that the quantity of iron in his blood had reached more than 5000 ug/dl, which was actually supposed to be 40-160 ug/dl -- this happened due to consistent blood transfusion," he says.

Pakistan needs 30 lakh bottle of blood that is 10 lakh litre of blood every year. It is important to break the myth that it can cause weakness in donors so that more people are encouraged to donate blood.

"It all happened due to sheer criminal negligence of doctors. No one ever told us that it is imperative to have a serum ferritin test done for every thalassaemic patient, after every 4-6 months, in order to get the count of iron in the blood. We were shattered as now besides blood transfusion we were compelled to give Kashif desferal injections through a pump and the only hope that remained for us was to have a bone marrow transplant (BMT) from abroad which was available, at that time, only in Italy and England."

"We needed large resources for that. I went to every nook and corner to gather funds. During that endeavour I discovered a lot about people. I met people who, despite having no acquaintanceship did a lot for me, particularly, late Moin Akhtar, the renowned TV artist helped me a lot in gathering funds by conducting shows, walks etc," Muhammad Iqbal goes on to say.

In November 1995, Iqbal and wife went to Pesaro, Italy where they learnt that BMT is not possible due to excessive amount of iron in Kashif’s blood which was 7,700 ug/dl at that time. "The only option we had was to extract excessive iron through desferal injections. After staying for 17 days in Italy, we headed towards London Royal Free Hospital where Kashif eventually died on March 15, 1996 due to excessive iron in blood, which was 11,000 ug/dl at the time of his death. His heart burst and I will never forget the moment when blood oozed out of his eyes and nose," says Muhammad Iqbal.

That was the background when back in 1996 Iqbal and his wife laid foundation of KITC in memory of their late son Kashif in order to save the future generations from the menace of Thalassaemia. "KITC now has turned into a robust tree in the fight against Thalassaemia," he says.

"We have state of the art facilities -- from lab to blood transfusion. There is a blood bank and we are providing full treatment to affected thalassaemic children under one roof."

It is important to mention that KITC has manufactured infusion pumps locally which costs Rs 4000 only. Earlier, it was imported and cost Rs60,000-90,000. "The infusion pumps are used for iron chelation therapy to the Thalassaemia major patients and are further provided to the thalassaemic families mostly from our Zakat fund," says Iqbal.

"We also focus on the mental rehabilitation of patients as well because it is important to boost their morale," he says.

In Pakistan, 6-7 per cent of the population is estimated to be carrier of Thalassaemia. This means around 7000-8000 infants are born with Thalassaemia minor in Pakistan every year. Currently, Pakistan has around 0.1 million patients of Thalassaemia," informs Muhammad Iqbal.

In order to tackle the problem appropriate interventions need to be integrated within the existing healthcare services. Though a number of NGOs are already working on combating Thalassaemia in Pakistan, it is not sufficient. A lot needs to be done regarding the execution of the Thalassaemia bill in Sindh and in other parts of the country as well.

A preventive measure is to conduct a simple blood test before marriage to save our future generations from Thalassaemia (through the enactment of law, like it is done in most Islamic and other states, where once Thalassaemia was widespread). There is need to identify potential carriers and raise awareness about it and encourage people to donate blood.

Pakistan needs 30 lakh bottle of blood that is 10 lakh litre of blood every year. It is important to break the myth that it can cause weakness in donors so that more people are encouraged to donate blood. There is a need to spread awareness that a person can donate blood thrice in a year, that is, after every 4 months and it is beneficial for health of the donor. This will help KITC and other organisations alike. Just spending time with these kids will also help.