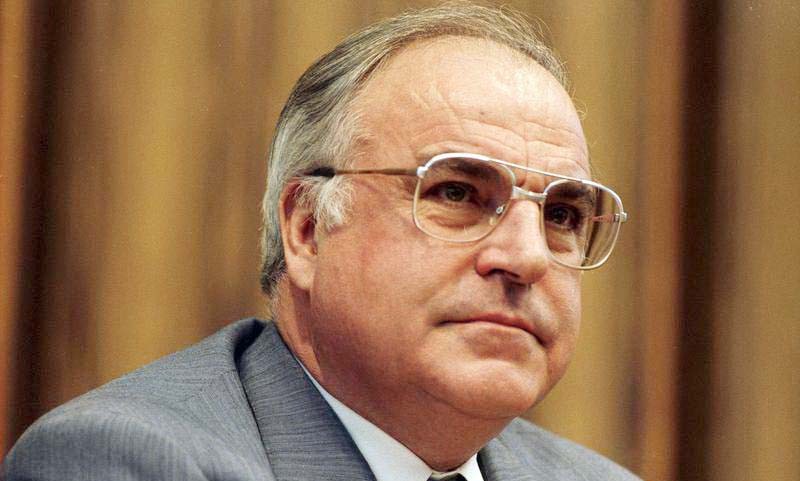 Helmut Kohl, the longest serving German chancellor between 1982 and 1998, who died at the age of 87, straddled post-war Germany, the radical sixties, the Cold War and the post-Cold War era. One half of him was German unifier, another European integrationist. Both halves shaped his dominant political outlook which required a fine balance between the heat and clash of conflicting visions. Luckily for him, both aims came to fruition under his chancellorship.

He was a meticulous and dogged politician who rose to the chancellorship of Germany and restablished the Christian Democratic Union (CDU) on the national political landscape after long decades of Social Democratic Party (SDP) at the helm. Despite his cold warrior credentials, he followed the path of detente with the East laid by Helmut Schmitt, the chancellor of Germany before Kohl.

Kohl forged good working relationship with Gorbachev, the reforming leader of the Soviet Union in the closing days of the USSR. This relationship proved central to Kohl’s German reunification plans when the Berlin wall came down. Kohl seized the opportunity offered by the fall of Berlin wall to catalyse the process which eventuated in the German unification.

However, the idea of German reunification was a hard sell to the then British Prime Minister, Margaret Thatcher, who stridently believed the resurgent Germany would dominate Europe. Kohl showed himself skilled at obtaining consent of the unification sceptics ranging from Gorbachev to Margaret Thatcher.

While Gorbachev was persuaded to consent to the German unification through monetary inducement, British opposition was toned down by enlisting the support of the French government. The Franco-German understanding was eased by Helmut Kohl’s historic handshake with the French President, Francois Mitterrand on the battlefield of Verdun in 1984. This act of grand reconciliation laid to rest mutual bitterness engendered by the second world war.

One half of Kohl was German unifier, another European integrationist. Both halves shaped his dominant political outlook which required a fine balance between the heat and clash of conflicting visions.

Despite then short-term cost of reunification to the West, the unified Germany is still regarded as his legacy. Kohl is often compared to Bismarck who in the 18th century was responsible for forging small states in the unified state which was divided into two parts in the aftermath of the second world war.

Kohl’s European credentials were enhanced by his catalytic role in the greater integration of Europe which led to Maastricht Treaty, a blue print for deeper European integration which ultimately led to the formation of Eurozone. The great Euro project was assisted by both French President François Mitterrand and Jacques Chirac. The formation of the Eurozone was to provide German economy with a huge stimulus as German exports to the Eurozone increased exponentially.

Inevitably, this led to the build-up of some anti-German sentiments by countries such as Greece that felt harshly treated by German-led Euro troika

Despite his retirement in 2002, Kohl did not fade into obscurity earnestly desired by his protégé Angela Merkel. He continued to intervene in political debates of the day, especially when they pertained to Europe. However, his elder statesman position was tarnished when the scandal involving illegal donation to his party came to light. Angela Markel, his protégé and the current chancellor, pulled plug on his career by calling on him to resign from the chairmanship of the party.

Though he survived the crisis despite refusing to name the donors, he continued to be in the news through careful release of his memoirs and his strident views on Europe which were often at odds with the current chancellorship.

Helmet Kohl was born in Rhineland-Palatinate in 1930. His father was a local tax official and the family was conservative and Catholic. Like the young men of his age, he enlisted in the Hitler Youth but did not see significant action. After the war, he returned to his war-ravaged home town. There he threw himself into politics beginning with the Christian Democratic Union (CDU) youth wing. He studied at the universities of Heidelberg and Frankfurt, finishing with doctorate on the politics of Rhineland.

In 1959, he became member of the Palatinate parliament. At the age of 39, he became the youngest premier of the state in 1969. Yet his sight was fixed on German chancellorship. Kohl managed to become CDU candidate for German chancellery in 1976 election. The election brought the CDU an unexpectedly 48 per cent of vote share. But Helmut Schmidt, the SDP chancellor, held onto the office.

However, in 1982, Kohl managed to undo the Helmut Schmidt chancellor when he persuaded the coalition partners the Free Democrats to walk out of the government. In the ensuing scenario, Helmet Schmidt lost the vote of confidence; Kohl became the chancellor. However, he called the election in 1983 to refresh his mandate. The election saw him win with a landslide.

Kohl was to stay in the office of chancellor till 1998 when Gerhard Schroder, of the SDP, ended his long run as the chancellor. Like Great Britain, where Tony Blair, leader of the Labour party, ended the Conservative party’s long occupation of 10 Downing Street, Gerhard Schroder ended the long reign of the CDU in Germany.

Yet the CDU was back in 2005 in power when Angela Merkel, Kohl’s protégé in the CDU, became the chancellor. That Kohl survived so long in the chancellery owed to his mastery of the CDU’s party machine. During his long career, he cultivated the party activists from up and down the country. His solid hold in the party based ensured his mastery of German politics.

In 2001 his wife, Hannelore Renner, suffering from a rare skin disease which left her unable to cope with daylight, committed suicide. In 2008 he suffered a fall which robbed him of the power of speech. Like a comeback kid, he made a speedy recovery. Soon after he married his partner of some years, Make Richter, who was aged 43 then.

In recent years, in the German press, stories have circulated of his second wife’s outsized influence on Kohl’s diary of last years and his larger legacy as he became wheel chair bound and increasingly dependent upon her. His long-time friends complained of limited access to him in his last years. Kohl leaves behind his second wife and two sons from his first marriage.