Women bikers on the city roads are a healthy trend. Their reasons for opting for the ride are likely to be varied, though 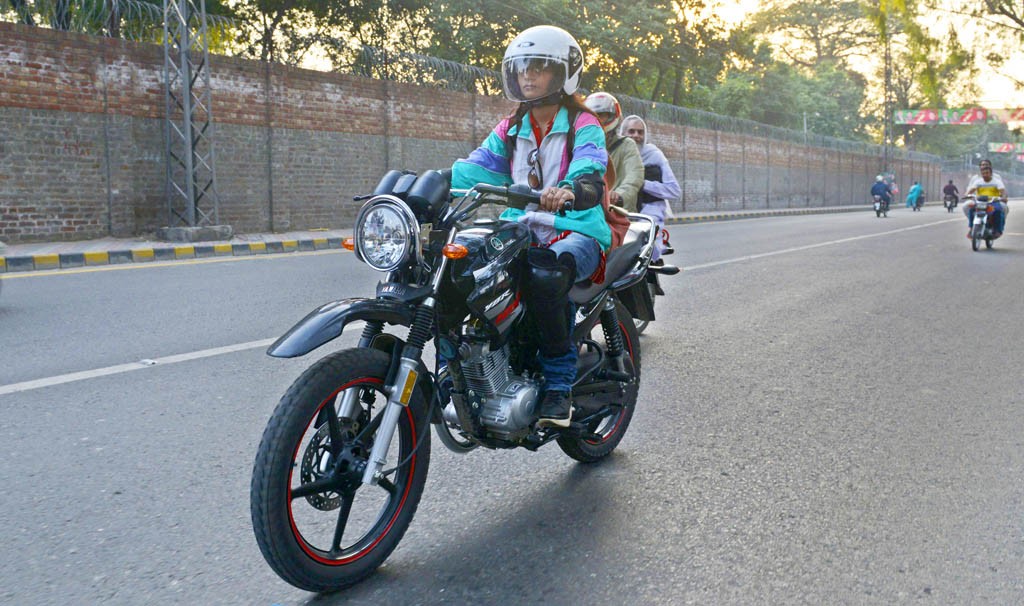 On a regular day, 26 years old Mehwish Gulzar, an assistant manager at a courier company, commutes to her workplace which is six kilometres from her home in Johar Town, riding on her burgundy-coloured CD70.

In a deeply patriarchal society like ours where women driving their vehicles on the roads without a male escort still carries ‘shock value’, such ‘independence’ is largely driven by the circumstances at home -- mostly, a lack of private transport or distrust for public facility. Gulzar’s case is no different. Though, she says, she has come to enjoy her ‘solo time’ over the years, "It’s a liberating experience!"

Mercifully, she hasn’t had to face harassment while moving around on her basic two-wheeler. It’s been so-far-so-good, "If my bike has a flat tyre or there’s some other issue, the people [in the streets] are always ready to help."

For Muqaddas Rashid, 19, riding her bike on the roads of Lahore hasn’t come easy. "Catcalls, hoots, or just deep stares are things you must be prepared for when you step out," she says, rather cheerlessly.

To her credit, Rashid hasn’t given up. Which, she admits, has partly to do with the support she has got from her family. "They [her folks] are fine even if I’ve to run errands at night time."

Personal safety is a concern, she admits, because the bike has no doors that could be locked from inside. She wears helmet almost religiously. Generally, she is draped in a dupatta or chaddar when going out; the helmet is added as a second layer.

Riding the bike eventually becomes more than just a lifestyle choice. Both Gulzar and Rashid have come to care for their pretty road machines that afford them a sense of freedom and joy also. "Oh, the initial fear that you may have goes away -- with time and exposure," Gulzar says, "I believe I’m a more confident person today. Period."

Maryam Butt’s story is a sad reminder of how badly we need to change the deep-set conservative norms of our society. A local school teacher, Butt has been riding a bike for over six years now. Only she dresses herself androgynously. "I feel more secure this way," she insists.

For them, their bikes’ upkeep is important too. "It’s like any one else who owns a bike," says Rashid. "People generally consider women as bad drivers, and while they have concerns about our safety they also believe we can’t look after our bikes. But I personally attend to all its issues by myself." This often involves lubing the chain, keeping track of the battery, fuel, oil, brakes, and sprocket.

There are many women bikers you see on the roads of the city, whose example could well be quoted here. Though Lahore may still be miles behind, for instance, its Punjabi neighbour across the border, Amritsar, where women bikers are a common phenomenon, the encouraging part is that the trend is picking up.

The government is also launching initiatives in this direction. In July last year, about 150 women motorcyclists who had finished training at the City Traffic Police Driving School in Thokar Niaz Baig, came out in the streets. They were supposed to take part in the Women on Wheels (WoW) rally, organised jointly by Punjab Chief Minister’s Special Monitoring Unit (SMU) on Law & Order and City Traffic Police. Later, the CM also announced availing 1,000 pink scooters at subsidised rates, for working women and students.

The idea is to empower women and give them access to public spaces traditionally considered the men’s domain. Twenty-six years old Maryam Butt’s story is a sad reminder of how badly we need to change the deep-set conservative norms of our society.

A local school teacher, Butt has been riding a bike for over six years now. Only she dresses herself androgynously. "I feel more secure this way," she insists.

There is a funny side to it, too. Butt recalls an incident where she was stopped by a traffic warden, for having made the wrong turn. "The minute I took off my helmet, he was dazed! But he was chivalrous enough to let me go."

Butt claims to be proficient in fixing smaller issues with the throttle or brake or clutch levers. "I can also adjust and clean the chain."

Her confidence is quite infectious. It has inspired her female students to want to learn to drive the motorbike.