The structural nature of extremism 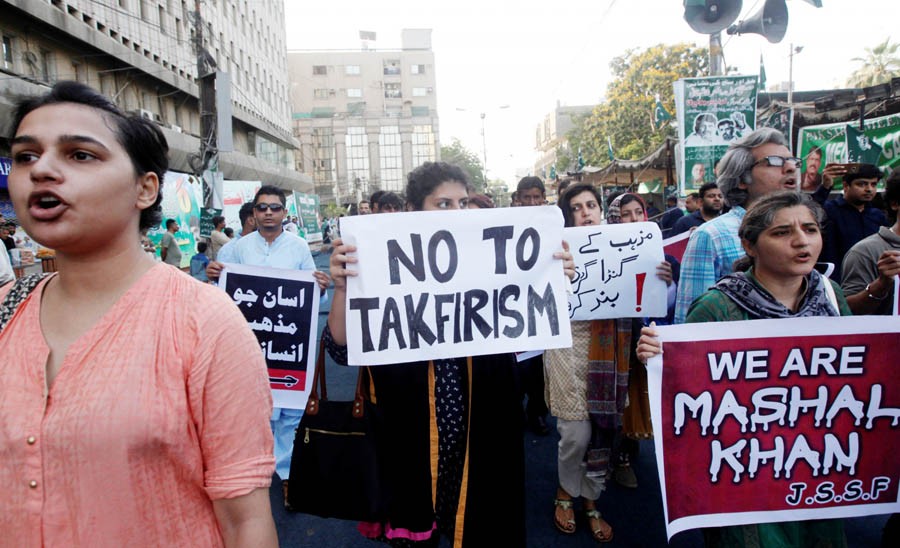 Why was the brutal murder of Mashal Khan on blasphemy allegations a surprise? Hadn’t Hafiz Sajjad Farooq also been lynched on blasphemy allegations in 1995 or Professor Attaur Rehman Saqib, the principal of Fehm-i-Quran Institute, killed in 2002? Why is it a surprise that the family wants to move the case from Mardan when former Justice Arif Iqbal Bhatti of the Lahore High Court was murdered in 1997 for acquitting two on blasphemy charges or human rights lawyer Rashid Rehman was killed for representing a blasphemy accused in 2014?

Why was it a surprise that Mashal’s murder took place in a university and was pre-meditated and politically motivated when most cases of allegations of blasphemy usually are? For example, Junaid Hafeez, a scholar continues to waste his life in jail as a victim of intradepartmental politics in Bahauddin Zakariya University.

Analysing the blasphemy-related violence, scholar Arafat Mazhar considers the 1987 changes in Blasphemy Law as a watershed by showing a comparison of 7 vs 1,335 allegations before and after these changes respectively. Similarly, 57 people have been killed extra-judicially after as compared to only 2 before the changes. Additionally, he suggests that the blasphemy narrative and linked religio-political actors have been strengthened because of the changes in the law.

While agreeing, I further argue that discourse is key to understanding extremism, including the blasphemy phenomena.

What the National Action Plan (NAP) has accomplished thus far is the curtailment of the ‘Takfir’ and ‘Jihad’ narrative frames. However, the extremism narrative is not limited to these frames alone. It has its roots in a particular religious interpretation, which is furthered by an extensive array of institutions, legislations and policies that propagate this interpretation.

What the National Action Plan (NAP) has accomplished thus far is the curtailment of the ‘Takfir’ and ‘Jihad’ narrative frames. However, the extremism narrative is not limited to these frames alone.

For instance, it was the Deobandi and Wahabi madrassas that were militarised with the acquiescence of the state to fight jihad in the region, and thus a curtailment of these two frames pertains primarily to these sects. Instead, the Barelvis got militarised because of the fear of losing inter-sect struggle for mosques which heightened their insecurity. Their primary motivational frame for this struggle, which differentiated them from other sects and could make them popular among the masses in a competitive religious market, was ‘blasphemy’, a narrative that continues apace.

In December 2016, the state used blasphemy allegations to discredit and shut up the four bloggers who were critiquing the monopoly of the national security state paradigm and its use of religious actors as a tool. Similarly, in March 2017, the Islamabad High Court ordered the government to take action against blasphemous content online.

Recently, the state has again made headlines by giving death penalty to a citizen for sharing ‘blasphemous’ content on social media. The state and the current political leadership thus seem to be in the business of fanning extremism because it is popularising and legitimising a blasphemy framework which has the capacity to mobilise along extremist lines.

Of course, the state should instead restrict the blasphemy narrative like that of Jihad and Takfir, but this is only a short term solution. For a long term solution to extremism, there is a need to transform the narrative in such a way that it loses its extremist mobilisation capacity. Two references from the Holy Quran are quite pertinent:

Sura Al-Anaam, Ch 6 Verse 68 states "Then thou seest men engaged in vain discourse about Our signs, turn away from them unless they turn to a different theme. If satan ever makes thee forget, then after recollection, sit not thou in the company of the ungodly", while Sura Al-Nisaa, Ch 4 Verse 140 states "Already has He sent you word in the Book, that when ye hear the signs of Allah held in defiance and ridicule, you are not to sit with them unless they turn to a different theme: if ye did, ye would be like them. For Allah will collect the hypocrites and those who defy faith - all in hell"

Based on the above, it is hard to justify the need for blasphemy law what to speak of death penalty or extrajudicial killing. While one can argue for some penalty to limit hate speech primarily for administrative purposes, still the 1980s and 1990s changes to the law were instead about the use of Islam for political capital, which continues to date. Thus, the necessary step towards tackling extremism is for the state and political leaders to stop furthering it.

The structural nature of extremism