The rains broke once more

I felt quite like the boy, from one of Intizar Hussain’s Urdu short stories, who goes walk-about in search for the clouds only to return to his village to find that they came and went in his absence 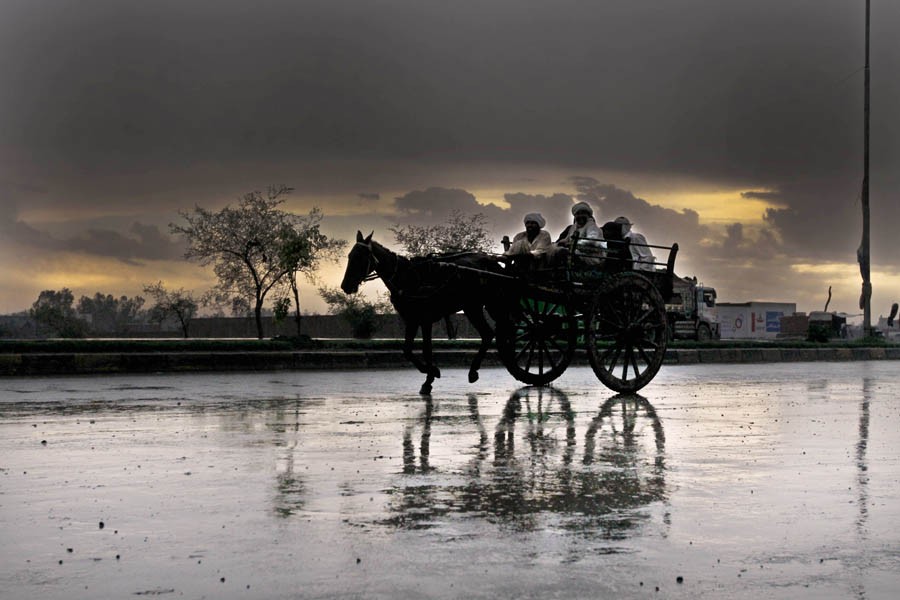 For quite some time now, the clouds have been making regular if still rare appearances. At the approach of dusk, or in the dead of the night, I have seen their billowing and heard their rumbling, but not a drop of rain did they let slip.

I would wake the morning after hoping to see the grass outside my bedroom window glistening in the sunlight. But with dismay what I found instead was glaring blue skies, clear and molten. The sun beating down harshly, causing bouts of madness in all those it touched. Not a hint of clouds anywhere. Only pungent vapour rising from burning engines and generators.

As the earth turned lighter shades of brown with every passing hour, progressively resembling a cricket pitch prepared to ensure a drawn test match, my search for the clouds grew restless. So much I wished to be among them that I booked a flight to England. It would not be possible for the clouds to escape my grasp on that piece of rock in the Atlantic.

Much happened on the trip. Items were lost, new wisdom was gained, but my search for the clouds remained futile. To the joy of locals, and to my dismay, it was bright and sunny and windy and all things nice. As they did after billowing and rumbling in Lahore, the clouds had once more forsaken me.

With vengeful annoyance with the skies over Britain I returned once more to the demanding queues of the Allama Iqbal International Airport, Lahore. The leaking canisters of holy water brought by pilgrims and deportees from the Kingdom wet the conveyor belts. Rolling a damp piece of luggage, I made my way towards the exit, once more to enter the oppressive maddening heat of Lahore.

Through the automatic doors I went and started scanning the crowd in search for my family. Rose petals were being showered on old men and women dressed in yarns of white, and then it hit me. The smell. It was everywhere. The rain-soaked air, bursting with the smell of damp earth subsumed me. In search for the rain I had gone only to have missed the first monsoon of the season.

It was everywhere. The rain-soaked air, bursting with the smell of damp earth subsumed me. In search for the rain I had gone only to have missed the first monsoon of the season.

While returning home I saw that the roads were wet and the trees freshly bathed. Gone was the dust that had accrued for months on end on their waxy leaves. The light-brown soil through which ran seams and cracks was again muddy and dark. The tree-branches that arch over the Mall Road to form a canopy that fights the rays of the sun, were that day dripping fat and round dollops of water on our car’s wind screen.

There were leaves and weak tawny branches strewn about our driveway. The gardener had raked to one side the yellowing dried out dead grass in the yard, leaving behind that glistening lush green in whose search for I had left in the first place. And though the smells and sights should have triggered in me the joys of summers past and brought back memories of dancing in the rain, I felt subdued.

I felt quite like the boy, from one of Intizar Hussain’s Urdu short stories, who goes walk-about in search for the clouds only to return to his village to find that they came and went in his absence. I too had missed them, and now had returned to a Lahore that would slowly but surely bake.

But finally, this week, the rains broke once more. I was happy to feel the drops clatter against my head and back, like frozen stones being pelted from the sky, while I ran with a smile towards the shelter of my car. And this time the memories came back. Of hot cups of tea, and warm glasses of milk; of worms and tree-climbing.

I saw while driving something I had seen during every rain in this city. Bus stops filled with commuters seeking shelter from the rain. Looking first to the violent downpour, and then to each other when they knew that rain would not relent, and the bus would not be coming. I saw them this week too. They, who would have been strangers on any other day, must have been sharing stories of dark clouds in all their ominous splendour, and awaiting the acerbic taste of a wet jamun picked up from the ground.

The months are upon us when the skies meet the earth. The monsoons are here; as it had been before, so it is now.

The rains broke once more