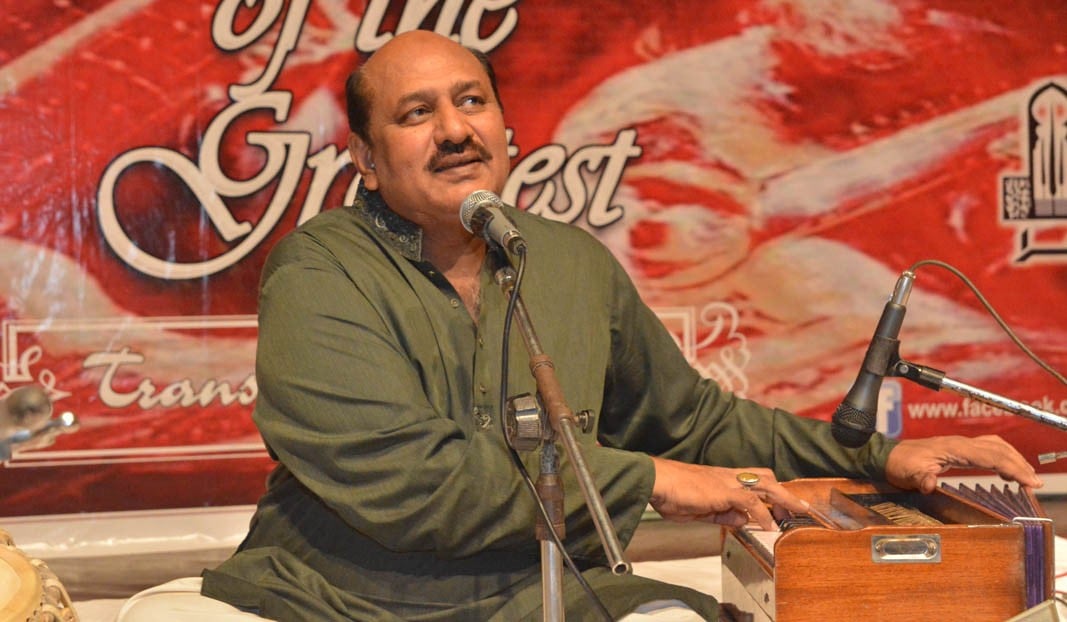 There has been a serious concern about the traditional music knowledge not passing on to the next generation. The usual and time-tested method has been of a personalised transfer from the father to son, ustad to the shagird. This guru-shishya parampara (teacher-disciple tradition) has been under threat for some time due to the huge change in the economic and social set-up in the 20th and 21st century.

In Pakistan, the fear of losing this asset is genuine and the prospects frightful. Since music is sound, its most authentic form of aural transfer is supposed to be the closest to saving it from losing as little as possible. Carvan, which is conscious of the traditions of the past and the fast-changing realities of the current era, has strived to maintain some kind of balance between the two to ensure a minimum loss in transition. It hosted an event where the shagirds of the famous ustads were given awards to highlight the significance of the transfer from one generation to the next.

The awards and those who received them under this ‘Transfer of Legacy’ label at the Alhamra recently were Sain Ditta Qadri Award given to his shagird/ nephew Akmal Qadri, Ustad Hamid Ali Khan Award to his sons -- Nayab Ali and Inaam Ali, Ustad Chotey Ghulam Ali Khan’s to Faheem Mazhar, Mehdi Hassan’s to Ghulam Abbas, Ustad Ghulam Hassan Shaggan’s to his grandson Muslim Shaggan, Ustad Salamat Ali Khan to son Shafqat Salamat Ali and Master Inayat Hussain to Ali Raza.

A concert by vocalists and instrumentalists present at the award ceremony was then held to wind up the proceedings of the evening with the participants. The audience was hopefully infused with the feeling that greater efforts and more specialised ones needed to be made to transfer musical knowledge. Wazir Afzal, Izzat Majeed, Dr Ishfaq Ahmed Khan, Affaq Syed, Hina Shafqat and Afshan Bukhari gave away the awards.

The transfer of musical knowledge has been a problematic area as indeed of all the arts, because it all took place within a totally informal structure. Usually as the families were also ruled by values of the professions that they specialised in, the knowledge thus became invested in those families. Certain were very arcane and possessive about their specialisations and that resulted in insularities and secrecies which were not always good for the growth of these forms. Actually, it cut both ways. It could result in loss of quality but in order not to lose the edge, these professionals became so tight-fisted, and insular that it did not auger well for growth of the form. It stagnated at times and needed resuscitation of new ideas and influences from the outside sources as well.

Since music is sound, its most authentic form of aural transfer is supposed to be the closest to saving it from losing as little as possible.

In the strictest sense, the sons did not become the formal shagirds of their fathers because most fathers found teaching their own progeny problematic. They were either held back by the relationship in the sense that they were not ruthless enough and exacting, or found themselves too jittery and nervous. The teaching, if any, was imbibed indirectly by living in the same house, attending concerts together and sharing the same set of values. The direct teaching method was more favourably carried out when the offspring of a hereditary professional became the shagird of a known ustad, either through the demonstration of his sheer talent that happened to be self evident, or through connections and contacts which families in the same profession capitalised upon.

In the transfer of knowledge, the European conservatories follow even today the older system and offer courses over a ten-year duration where teaching is personalised but not conducted formally. But another system is followed more in the universities, particularly in the United States, where it is bound more by the formal academic structures that strive for uniformity with little patience for the particularity of the discipline.

This type of transfer of musical knowledge in the Indian subcontinent started under European influence as the formal methods of pedagogy in other disciplines were further broadened to include the crafts and then the arts as the distinction between the two was quite fluid then. It was stretched to include music when it was realised that the knowledge was restricted to the families and there was no method of teaching it in the formal sense.

Bhatkhande and Paluskar started the drive to democratise music knowledge and were partly successful but not wholly so. It provided an opening to the non-hereditary musicians to make some inroads into the interiority of the mystery called music. The system or initiative produced competent artistes and good listeners but the most outstanding musicians, more often than not, still kept popping up through the informal route.

The same dilemma has continued till now, and probably due to technological developments questions are being raised about some of the core issues like creativity and construction. It is possible that the focus may shift altogether to a new paradigm that may start to see the entire debate from a totally different standpoint.