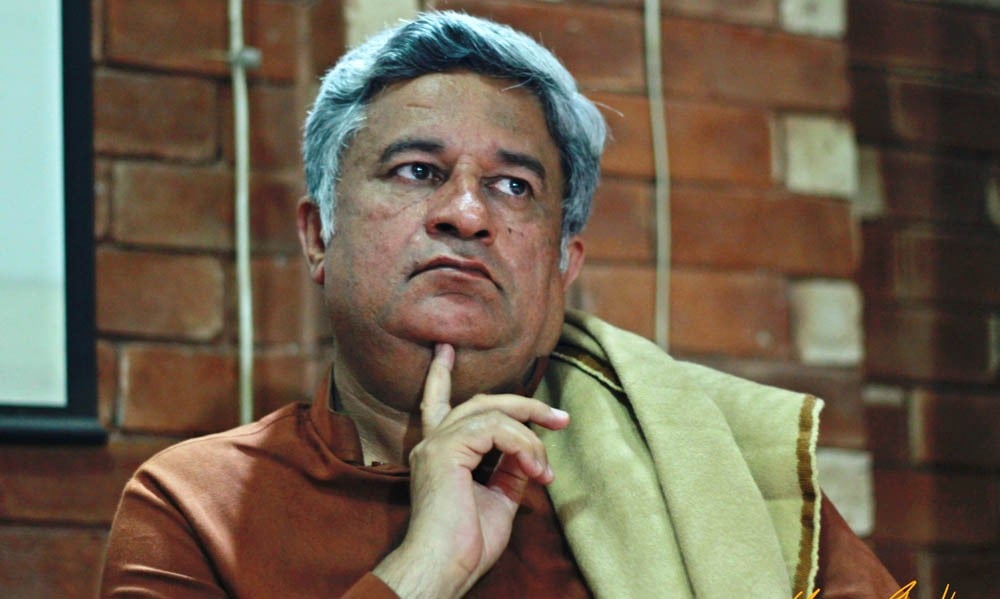 Nain Sukh has emerged as a major name in Punjabi fiction writing among the literary circles. His novel Lhore Di Vail (2014) created a huge stir, both with its outreach and critical acclaim.

Punjabi writers are spurred by the way he has illustrated Lahore, the capital of Punjab, as a rich settlement of animated people -- artisans, jogis, kanjars, land grabbers, maulvis, politicians, etc. -- and not just a house of power plays, a (soulless) city whose social history surpassed its politics. No local book could have mixed fiction with fact and history better than Nain Sukh’s. That is why few will dispute fellow Punjabi writer Zubair Ahmed’s assertion that his novel can be placed alongside works of literature in any language.

For critic Mushtaq Soofi, Nain Sukh allures with his non-linear narrative and the possibility of time travels within his stories. He was duly acknowledged when he won Dhahan International Prize for Punjabi Literature for Lhore Di Vail.

Initially introduced as the poet of a published book, Kikkar tay Angoor (1994) (people came to know later that Nain Sukh was a pseudonym for Khalid Mehmood), he has two more compilations of short stories to his credit: Theekaryan (2005) and Uthal Puthal (2011).

His latest book Shaheed that has come out this year is a collection of short stories where he continues experimenting on blending the real with the imagined, and the present with history. This is the book where I begin my conversation with him.

I ask him about mixing fiction with fact and history even though he wasn’t doing historical writing. Why this fusion?

"I am addicted to history, but it is of no significance if not linked with the present times. That is also to confirm that what is good and bad today also existed in the past; there is continuity. I can’t keep writing about those in the past without mentioning those around us. It is to complete the thread of events in time. In legal terms, if there is an occurrence and cause of action today, it was also present in the past. I see links between the past and the present," he says.

Nain Sukh has no space for ideas like return-to-the-village. He says this city (Lahore) has its own history: "It goes to its credit that it was a place which started giving respect to working and skilful people. Names of old Lahore’s all mohallas are after working communities."

To elaborate, Nain Sukh cites his short story, ‘Chunbay Di Booti’ where a teacher abandons studying the book Tareekh-e-Jhang Chiniot (History of Jhang Chiniot) by saying that ‘does history means that we prompt people to raise flags of prejudices? People are different but why should I have a superior self, or [claim] that my area is better than others’ [as these history books want us to believe].

"It did not happen in history that Jats or Rajputs were superior to others and so on. If I believe in such things then I will skip writing about ordinary people," says Nain Sukh.

"Once, me and my friend, Aamir Riaz, went to visit Uggra Mussali in search of oral history narratives. He lived in Sargodha and in his prime days also did politics under the nom de plume of Aga Khan Salohtra. About his area inhabitants, he said: ‘Nooro Noor Tajulla See, Chuhra See Ya Allah See (Everything was clear, Only God and Chuhras lived there)’. That region of Sargodha was called ‘Changar Baar’ (land of the Changars).

"But nobody mentions it now. Big land owners have fabricated their own histories and have got their Qaseeda Gos (encomiasts). I try to look into the past as it was. One of my characters Malik Riaz is plundering jungles. When I revisit history, I see that similar people existed in the past as well. I explore to trace people like him and, in this story, I see there were the Ghakkars who fought for lands. In that sense, there is continuity in my narration of occurrences and they are interlinked despite existing in different times. But there are also missing links because of which I write fiction. Otherwise, I would write history. There are also gaps in the present occurrences which I fill with history and fulfill my addiction [for history]."

Nain Sukh tells me he is concerned about the present times and people who are suffering and are nameless. "They are perhaps the real owners of our lands. No one wants to invoke the stories of their elders, and in some cases even their own scions refuse to own them. Simultaneously, there are characters from qabza groups who pose to be the nobility."

He emphasises that it is beyond his control to segregate this present from the past. "When there is constant cruelty and injustices done with these nameless people, then automatically you tend to bring in the continuity of time in perspective. I can’t separate them."

I enquire from Nain Sukh if it is a conscious decision that he has adopted a qissa-style narration of stories. In his earlier fiction, especially in the introductions of the stories, he was almost poetic in his prose. "I developed this style over time. In my first book of short stories, I almost wrote entire stories in blank verse. Then I had to vet and rewrite them."

In Nain Sukh, you can read the dialects of all key sub-linguistic groups of Punjab. His story ‘Margalla Kahani’ is written in Pothohari dialect and is backed by indepth research that he puts into tracing the histories of the focused habitat in his fiction. He used to frequently visit Islamabad for his law practice and hear about stories of qabza (appropriation) of land and property. It was then that he started thinking of the ancient times, when there were jungles that had also been occupied like the present day. He became curious and started his probe into the Margalla settlements. He read on how Islamabad was founded. He talked to the native people and all this material helped him to connect the land-grabbers of the past and present.

This was a kind of research, an investigation, on what was this area like and how it changed. He weaved all this information into a story with characters, where he showed the archaeology, history, characters and personal lives around the Margalla hills. Haunted by images of the proverbial snakes of Margalla, "I basically tried to convey that these snakes have been devouring the land. It was different than my earlier stories based on thinking about a plot/idea and then to write a story," Nain Sukh says.

The same technique was repeated in his story ‘Fort Munroe’ but in a Seraiki belt setting and with more representative value attached to its characters symbolising actors from different sub-national identities i.e. Punjabi, Sindhi, Baloch, Pushtoon and Seraiki, and local Maulvis and bureaucrats. This can be overbearing and could compromise the fictional quality of story and existence of its characters? I ask him. He replies if he has not been able to sustain the story side of his characters and the politics of inter-ethnicity dialogue dominates, then it would be an "imperfection".

At this point, one can’t resist asking him about his relationship with the elite that seems to stem out of suspicion and is intense. Does he think that each time he intervenes in his stories (like Maqoola-e-Shair), his comments are to malign the elite? Nain Sukh is quick to respond: "Not at all. I am keen about things in the making, trajectory of issues, historical roots of occurrences. I don’t have a problem with the elite as such. During my background research for the story on Margalla, I did not find any land appropriation on part of Chaudhry Nisar Ali Khan. Nor I could come across any evidence against Syeda Abida Hussain and Faisal Saleh Hayat in germinating the sectarian conflict in Jhang while researching for my story, ‘Chunbay Di Booti’. Local politicians had nothing to do with sectarianism in Jhang. I don’t resent them just because they are the local elite.

"I wanted to track down why Jhang became the hotbed of sectarianism. The British records reveal that Jhang was a marginal district. It almost got no funds, but one Anjuman-e Hussainia got funds from the British just like Anjuman-e Imamia under Qazilbashs from Lahore and Anjuaman-e-Sadaat-e Wazifa under Gardezis from Multan. Reformist movements of Hindus were also active in Jhang. After the 1947 partition, people from the migrant community took hold of shops earlier owned by Hindu Khatris.

"I believe that present day militancy and Taliban’s roots go back to reactionary politics of the Tehreek-e Khilafat. It is interesting that the local welfare work of different religious communities turned into hate politics in the Punjab.

"I don’t have a sweeping resentment against the elite as a group. I name the bad guys and if they are not committing cruelties I won’t shame them."

And what about the short story, ‘Shaheed’? The book is also titled after it and written in memory of his younger brother Lt. Col. Shakeel who died in a car accident in Quetta under mysterious circumstances. Here he is more than a writer who lost his younger brother.

Nain Sukh tells his late brother was very close and candid with him but in later days he was reluctant to share things. The short story flows along sifting of the photo album pages of Lt. Col. Shakeel from his childhood onwards. The writer tells it in a first person narrative while talking to a second person, the protagonist. This authorly dialogue shows the intensity of personal loss and passionate calling to a deceased brother, whose cause of death is still unresolved.

Nain Sukh says: "I made an effort not to sound like reciting a Majlis, wanting my readers to cry. At one point, I felt I was doing it. I consciously controlled that and omitted many things. I skipped mentioning that my other younger brother did not eat for many days, he got tuberculosis despite having great health. I tried to control my emotions while writing this short story and curbed my anger."

It is worth noting that names of all characters in this short story are real; so are lists of properties owned by certain former military officials and their families as narrated in this piece. Property is a favourite topic of discussion among the families mentioned here. Nain Sukh says "it was to show the environment and the greed of officials which took the life of his brother". The inquiry report of the death of Lt. Col Shakeel has not been shared with family of the deceased.

"I am not fictionalising my brother. It is a personal loss; I am grieved. It has nothing to do with hating or bashing the army," he says.

Nain Sukh has no space for ideas like return-to-the-village. He says this city (Lahore) has its own history: "It goes to its credit that it was a place which started giving respect to working and skilful people. Names of old Lahore’s all mohallas are after working communities. There is a shared street culture in the city. Some people castigate city people as baigharat (shameless), but the important thing is the Sanhj (relatedness) of Lahori people. Its town planning and architecture may be different than rural areas, but here the people are connected with each other just like in villages. Some friends asked me why I wrote on Lahore when I had spent my childhood in a Jangli village (Siyal Dholka) near Sillanwali, Sargodha. I really love Lahoris.

"I must also mention that the ordinary people of villages don’t hate cities. They would return from cities and happily tell stories about them."