An analysis of budget resources, expenditure and deficit since the 2013-14 fiscal year, while focusing on federal budget 2017-18 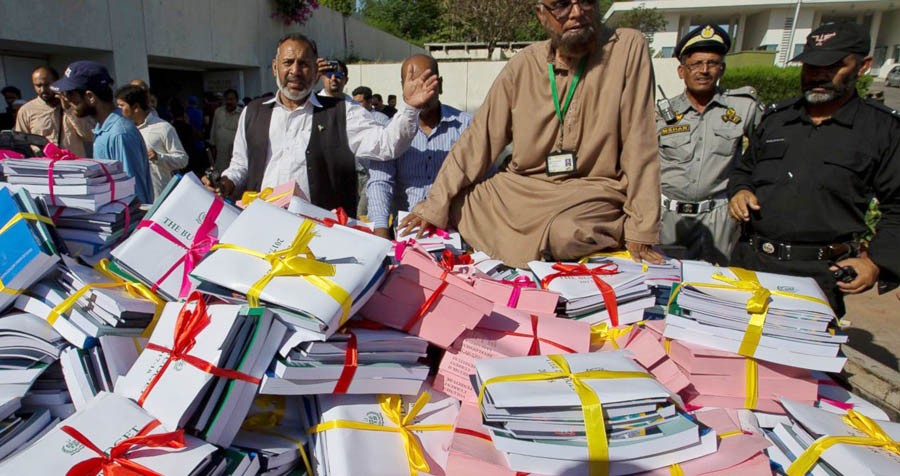 The presentation of Pakistan’s federal budget 2017-18, the fifth budget of the incumbent Pakistan Muslim League-Nawaz (PML-N) government, in the National Assembly on May 26 was followed by an unprecedented debate in the media regarding its pros and cons. In particular, one was pleasantly surprised to see the media -- at times, with help of experts -- laying the budget threadbare, and digging deep into the numbers to highlight the government’s priorities.

The media’s increased ability to analyse the budget on its own, rather than relying on government press releases and superfluous stories on hikes in the defence budget or the low priority accorded to the social sector, represents a significant departure from the past. With the opposition showing a complete lack of enthusiasm to unravel the budget and call the PML-N government’s economic bluff, the media assumed an even larger role of educating the masses.

Having said this, the media still has many bases to cover. For example, ideally its overall focus should have been on presenting a comprehensive, all-encompassing picture of the economy to the reader or viewer. In most cases, budget resources, expenditure and deficit (or their sub-heads like current or development expenditure) were dealt with in isolation though they are intrinsically linked.

The budget presentation phase receives all the media attention, evidently at the cost of formulation, execution and reporting phases, which are equally if not more important.

While focusing on federal budget 2017-18, this piece analyses budget resources, expenditure and deficit since the 2013-14 fiscal year. Then the incumbent PML-N government had presented its first budget to show a comprehensive picture of the economy, and predict what lies in store for us as a nation, and also to comment on the PML-N’s overall budgetary performance during the current tenure.

The budget in context

Budget formulation is a tedious exercise, more so in a country like Pakistan with so many pressing priorities competing for scarce resources. However, the political dimension of the budget formulation process is mostly ignored in favour of its technical dimension, thereby thwarting any genuine attempt at analysis. Before the presentation of federal budget 2017-18, the general expectation was that it would be people-friendly. The optimism was mainly based on the assumption that the ruling PML-N would leave no stone unturned to demonstrate its sincerity for uplifting the masses during the election year.

Many important questions arise: is the government trying to say that, in the next fiscal year, it would be able to spend Rs141 billion less than the outgoing fiscal year on account of current expenditure? Is the government planning to lay off its employees and close down public schools and hospitals or does it have the courage to reduce the defence expenditure?

The government has not disappointed, increasing the allocation for the federal Public Sector Development Programme (PSDP) by 25 per cent. This sounds good but for two concerns: one, the availability of resources to cater to an unprecedented increase in the PSDP; and two, the federal government’s capacity to utilise the full allocation for the PSDP even if resources are available for once.

However, the most serious problem with budgeting in Pakistan in the past decade is the underestimation of expenditure at the time of budget presentation. In particular, current expenditure -- comprising domestic and foreign debt servicing, defence, and running of civil administration -- is estimated to be much less than what it should be, helped by the actual budgetary figures which become available in August when neither the media or the opposition is paying attention. Though we ‘owe’ this style of budgeting to Shaukat Aziz, it must be acknowledged that Finance Minister Ishaq Dar has taken it to another level.

An overestimation of resources, and the underestimation of expenditure results in a higher budget deficit met through bank borrowings at higher interest rates. The PML-N government claims to have reduced the budget deficit as a percentage of Gross Domestic Product (GDP) but doubts abound. It will be clear only in August, when actual budgetary figures for the outgoing fiscal year are made available by the Ministry of Finance, how profound or shallow this claim was, once again when all those who matter would be looking the other way.

One of the major drawbacks of the budget analysis and monitoring work in Pakistan is that only the expenditure side is considered worthy of discussion, while the resource side is largely ignored, because of which the negative effects of different revenue measures are often overlooked. With this in view, an attempt has been made to examine the resources in federal budget 2017-18, as well in the four previous ones presented by the incumbent PML-N government, and measure their possible impact on the people of Pakistan.

The internal resources in Pakistan’s federal budget comprise mainly revenue receipts, the most important classification in the budget in terms of volume. A detailed discussion on the impact of revenue receipts -- comprising tax revenue and non-tax revenue, estimated to account for more than 60 per cent of the country’s resources -- on the country is essential here.

In the federal budget 2017-18, revenue receipts have been estimated at Rs2,926 billion, showing an increase of Rs146 billion or 5.3 per cent over the estimates of the outgoing federal budget. Since federal budget 2013-14 (the first of the incumbent government), estimated revenue receipts have increased by 52.6 per cent, or 10.5 per cent annually (from Rs1,918 billion in 2013-14 to Rs2,926 billion in 2017-18). However, actual budgetary figures available for the first three fiscal years (2013-14 to 2015-16) are not that impressive because the government missed its revenue targets in two of these, and it is on course to do the same in the outgoing fiscal year.

The situation went from bad to worse in 2015-16, when the government missed its revenue target by Rs245 billion, managing to raise only Rs2,218 billion against the target of Rs2,463 billion.

Similarly, the revenue target of Rs2,926 billion for fiscal year 2017-18 can be termed ambitious at best, considering that the government has not provided significant respite to the business community, as well as increased level of indirect taxes on industry, thus diminishing the possibility of substantial economic growth to justify the estimated revenue receipts. What this means for the economy is the higher the budget deficit, more borrowings from commercial banks and increased cuts in the federal PSDP.

Many important questions arise: is the government trying to say that, in the next fiscal year, it would be able to spend Rs141 billion less than the outgoing fiscal year on account of current expenditure? Is the government planning to lay off its employees and close down public schools and hospitals or does it have the courage to reduce the defence expenditure? How else it would be able to spend Rs141 billion less next fiscal year than the outgoing fiscal year, particularly considering that: (a) elections are just round the corner; (b) salaries and pensions have been increased; and (iii) fiscal deficit of over Rs1,1480 billion (bound to increase by a few hundred billion by next budget) would eat up a lion’s share of current expenditure in the form of domestic and foreign debt servicing and repayment?

Even going by the current rate, the government would end up spending at least Rs4,807 billion on account of current expenditure in the outgoing fiscal year. In all probability, the actual figure would exceed Rs5,500 billion. Also, the revised estimate of current expenditure at Rs3,905 billion reflects a dismal lack of economic prudence, being off target by at least Rs900 billion with just one month left in the fiscal year’s end. Evidently, to meet the shortfall in the outgoing fiscal year’s budget, the government would have to impose more taxes or resort to bank borrowings, both of which do not bode well for the economy or the people.

Coming to the development expenditure, in federal budget 2017-18, the PSDP has been increased by Rs201 billion compared with original estimates, and by Rs286 billion compared with revised estimates in the outgoing budget (from Rs800 billion and Rs715 billion to Rs1,001 billion). However, one would be well advised not to accept these figures at face value. Because the federal PSDP utilisation in the first three quarters of the ongoing fiscal year (July 2016-March 2017) has been an abysmal Rs324 billion.

So, in effect, the federal government is proposing to spend Rs391 billion on account of the federal PSDP in the last quarter of the outgoing fiscal year when it had much less in the first third quarters combined. Even discounting that elections are around the corner and development expenditure picks up in the last quarter, this is an ambitious target, which also raises doubts about the government’s capacity to spend Rs1 trillion on development alone in the next fiscal year.

To sum up, next year’s budget targets can at best be described as pie in the sky. Very soon, the shortfall in revenue could force the government to resort to anti-people measures such as overburdening taxation. Even if the government meets the revenue shortfall through bank borrowings, people will suffer because they would have to pay the interest on the borrowed money in the years to come. Most important, dictated by the budget deficit of Rs1,480 billion that is growing each day, the financial discipline the PML-N government’s financial wizards are so fond of bragging about has been sacrificed at the altar of an election year budget.