Renaissance of the college 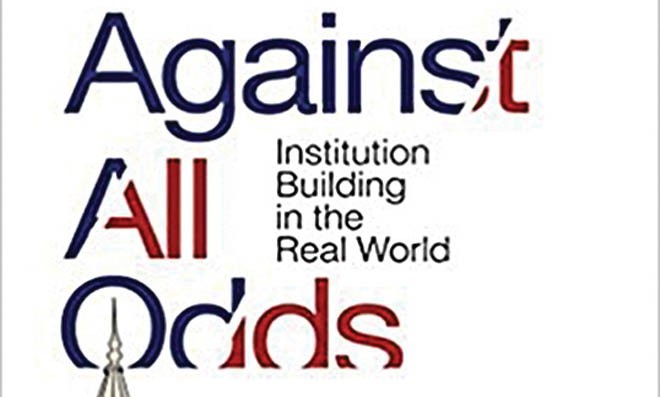 The book under review tells the heroic story of an attempt to save an institution from certain ruin by predatory elements of the society, who were oblivious to even their own self-interest. The story is also about how the institution was made autonomous and then elevated to a full-fledged university.

The story is movingly told by the first Vice-Chancellor of the Government College University, Lahore, Professor Khalid Aftab who retired in 2011, after serving as head of the institution for 18 years, half of them as the principal and half as vice-chancellor. Preceding Dr Aftab as the principal of the Government College Lahore was a long line of distinguished British scholars and administrators.

Besides carrying the burden of this intellectual heritage, the new principal also pulled the institution out of the abyss it had fallen into after having achieved success in the first two decades after independence. As Dr Aftab eloquently writes, "the problems were many and the situation depressing, we remained hopeful that, like a phoenix, this old College would at long last rise from its ashes".

Perhaps, the most turbulent period in the history of the college --- as well as the country, especially Punjab --- was the time preceding and following Partition. With the migration of non-Muslim professors, who formed a majority, the teaching staff was reduced to approximately a dozen, and the student population had dwindled to about a 100. Professor Bokhari was successful in raising enrolment to about 1,000. In the next five decades the student population rose to over 10,000.

When Dr Aftab became the principal, among his many challenges was one of student indiscipline. The campus had become a battleground for rival political groups, proxying for major political parties. In fact, the offer for the post of principal to Dr Aftab was made directly by Prime Minister Nawaz Sharif, himself a past student of GC. Sharif asked him to stem the rot in their alma mater and "take on the thugs who have caused so much harm to our College".

Apparently, it is not an easy task to be both academic and administrator at the same time, and to fully live up to the title of the book, Against All Odds, even for as indefatigable and perseverant a person as himself.

Dr Aftab’s candid response to the prime minister was to blame the situation in part to the role of political parties, including his own -- which was backing the faction headed by a son of Lahore’s mayor. This must have embarrassed the prime minister since the mayor was among those invited to meet the principal-designate. The prime minister quickly changed the subject by diverting the guests’ attention to the succulent prawns on the table.

Dr Aftab’s reputation as a capable, if outspoken, administrator and his long association with the college as a student, teacher and the head of Economics Department, helped to banish whatever negative thoughts may have momentarily crossed the PM’s mind.

Dr Aftab’s resolve to combat indiscipline was tested soon after he assumed office. The first person to enter his office -- without seeking permission or prior appointment -- was none other than the mayor’s son he had named as a professional trouble-maker at the meeting with the prime minister a day earlier. The student introduced himself as the leader of PML-N’s student group in GC, and said that he had come to pledge his group’s support. Dr Aftab saw through his coded message and sternly warned him to never again enter without permission.

This hardly had an effect on the incorrigible student, and a few days later there were more incidents of indiscipline involving him. Historically, such incidents were condoned by the authorities, but Dr Aftab took the bull by the horns and reported such matters either to the police or the disciplinary body of the college -- a public humiliation that seemed to work in those days.

After firmly standing up against the curse of indiscipline, Dr Aftab turned his attention to strengthening GC’s academic programme --- which was being subverted by the corrosive effects of the lucrative practice of tuition by teachers -- and the revival of sports, drama, debates and music, literary and cultural activities for which the college had previously held a reputation.

The central theme of the book and the lesson to be derived from the author’s long experience as the institution’s head is the value of autonomy to an educational institution as a means of raising its academic standards.

To reach his cherished goal of making it a ‘world class university’, with its own charter and vision, from being an affiliated college of a large university, Dr Aftab had to free himself from being tethered to the parent institution - first, Calcutta University (1864-82) and later the Punjab University (1882-1997), whose curriculum it had to meticulously follow, year after year.

By 1989 GC was declared an autonomous body. But the kind of autonomy that is granted in Pakistan is skin deep, and is often used by the government to exert control. The autonomy given to GC in 1989 was "limited administrative and financial autonomy".

The road to receiving a degree-awarding status, full autonomy and becoming the Government College University (GCU) was steep, winding and often nauseous, as Dr Aftab describes. The journey is full of interesting and amusing anecdotes reflective of the sociology of decision-making in an environment of social networking and implicit quid pro quo expectations among elite groups. One obvious reason for Dr Aftab’s fortuitousness was that there was hardly anyone in decision-making circles, be it bureaucratic or political, who or whose close relative had not been a part of the institution. Serendipitous meetings with influential persons (such as a Governor or President) at marriage parties were often more effective forums for reaching momentous public decisions than statutorily-constituted bodies for deliberating on them in a transparent manner.

Dr Aftab faced louder music after attaining his goal of autonomy, both from within GCU and outside: infighting by teachers and opposition by obscurantist elements for whom any step towards reform or modernisation was an anathema and a violation of the core values of our country and religion. In one episode the ISI, was invoked for investigating whether changes in the GCU’s Islamic Studies curriculum were "anti-Islamic", as falsely alleged in some mosques during Friday sermons.

Undeterred by such setbacks, Dr Aftab achieved new highs for his alma mater by bringing about changes in admissions policies, including the admission of females to undergraduate classes as a general rule, rather than as an exception for certain disciplines.

The book contains 13 chapters, of which I found the first six more interesting -- these are about the time before Dr Aftab became VC. However, the remaining half of the book is more eventful and details the wide-ranging reforms and reconstruction that took place under his stewardship.

Among the many feathers that Dr Aftab added to his cap during his tenure as the university’s first VC, was the creation of the Salam Chair in Physics. This was a belated recognition of the Nobel Laureate’s invaluable contribution to his country and higher education, in general, and Physics and his alma mater, in particular.

This acknowledgement came amid considerable resistance from those who had prevented Dr Salam -- regretfully because of his religious beliefs -- from receiving any accolade in his country even two decades after receiving the Nobel. Even Benazir Bhutto, then PM, was afraid of the bigoted anti-Ahmedi lobby, and refused to grant him an interview.

However, in 1996, when she became the Prime Minister for the second time, Dr Aftab and his physicist colleagues were able to persuade her to agree to honour Dr Salam befittingly.

The last three chapters of the book are a bit anti-climactic, as enlightened vision meets muddied ground reality. Dr Aftab’s experience in the field of infrastructure development and creating a sustainable financial resource base was largely unhappy and he seemed to be perennially chasing a wild goose to achieve his cherished goals. Apparently, it is not an easy task to be both academic and administrator at the same time, and to fully live up to the title of the book, Against All Odds, even for as indefatigable and perseverant a person as himself.

Renaissance of the college