The port in question 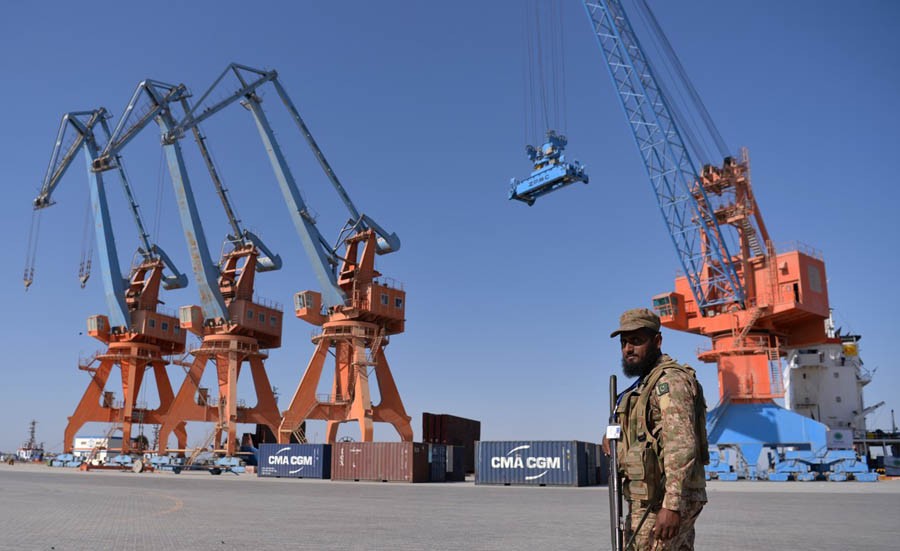 Located on the coast facing the Arabian Sea, Gwadar is one of the most cherished destinations for investors keeping in view its importance under CPEC. Meaning the "gateway to winds", this town is the culmination point of the CPEC route, starting from Kashghar in Xinjiang, China. Gwadar houses the port that will be used for transporting local and Chinese goods to the world through the sea route, and petroleum products obtained from the Gulf region to China.

Work on the Gwadar Port, leased out to the state-owned China Overseas Port Holding Company (COPHC) for 40 years, has been in progress since 2013. Four cranes are functioning at the moment. The port will also serve China’s naval purposes --- the country has recently provided a third naval ship to Pakistan recently.

A look at media advertisements makes one visualise a mega city with skyscrapers and residential and recreational facilities with a high price tag. Real estate advisors and investors are also capitalising on this perception, asking for high prices. Potential buyers are unable to decide whether to put their bets on the promises.

Read also: The Chinese have arrived

Kaiser Bengali, senior economist who has been advisor to Balochistan’s chief minister, is not that optimistic. He thinks in the absence of water Gwadar cannot be transformed into a mega city and industrial hub. "At the moment, water is being brought from Merani Dam, located at a distance of around 150 kilometres from Gwadar, and a tanker is being sold for Rs24,000 to Rs26,000," he says. "The existing perception has been created by the real estate people who claim that people from all over the world will settle here for business, etc.," he adds.

One major impediment to Gwadar’s development, discovered during interactions with different stakeholders, is that the government wants China to develop the whole of Gwadar and exonerate itself of its own responsibilities.

In Bengali’s opinion, it will simply be a transit port and there will be little interest in investing in the overall development of Gwadar. He also thinks that due to the water issue, it will not be feasible to set up industries, except final packaging of products for their onward transportation by sea. "Desalination of sea water is an option but it is too costly, especially when there will be a need to provide subsidy on water to the locals for an endless period. Historically, there are three-to-seven-years-long dry cycles in rain-dependent Gwadar," he says.

Senator Mir Kabir, member of the Senate Committee on CPEC, says that "committee members visited Gwadar earlier this month and found that progress was far from satisfactory. There is severe electricity shortage but all that has been done is that a piece of land has been earmarked for setting up the promised 300 MW plant there." Similarly, he says, scarcity of drinking water is adding to the woes of the locals. "There is a small five-to-six room makeshift hospital donated by a Chinese NGO and a two-room primary school claimed to be one of the full-fledged projects to be executed in Balochistan under CPEC," he adds.

Kabir is concerned about employment of locals at the Gwadar Port and points at non-availability of vocational training to locals. He demands signing of a state-level agreement to induct locals for unskilled work at the port. "Right now there are serious concerns that labour will be brought from China just as they are bringing their own construction material, including cement and steel. The stories about Chinese using their prisoners at project sites are well known to the locals, leading to skepticism among them," he adds.

Bengali adds that employment for locals is a serious issue and he has found people from other areas of Pakistan brought here for jobs. "Almost all the staff of the biggest hotel in Gwadar belongs to Karachi," he discloses. He says, "the hopes of too many jobs at Gwadar Port are far-fetched as it will be a highly mechanised one, leaving little for humans to do."

Kabir says Chinese companies are currently using the local sand and gravel but in the near future they plan to get rid of even this dependence. "They have requested to lease the hills in Gwadar so that they can crush and use its stones to make gravel on their own."

Kabir says they have demanded the government to carry out legislation to prevent Baloch demographics from changing due to influx of outsiders in Gwadar but there is no response from the government. "This can be done by denying voting rights and domiciles, etc, to settlers," he says.

For Kabir even more serious is the issue of fishermen whose livelihoods will be lost due to their relocation and patrolling of adjacent sea waters by naval ships.

One major impediment to Gwadar’s development, discovered during interactions with different stakeholders, is that the government wants China to develop the whole of Gwadar and exonerate itself of its own responsibilities.

The port in question