Comparing Imran and Misbah is like comparing apples with oranges. To many, it seemed the comparison was politically motivated to demean Imran Khan 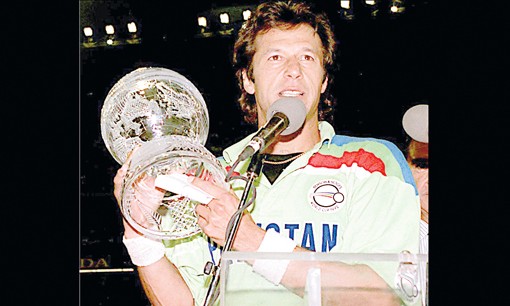 There are examples of sportspersons becoming bigger celebrities than their peers owing to their activities outside their sporting discipline. The classic example is of Mohammad Ali, the famed boxer, who is also known for his activism, especially for his role in making America’s war on Vietnam controversial and eventually bringing it to a halt.

Imran Khan, the captain of Pakistan cricket team which won World Cup 1992, first gained prominence as a philanthropist when he founding Pakistan’s first cancer hospital and now he is leading the third largest political party in Pakistan.

After the departure of Imran Khan, there had been a captaincy crisis until Misbah-ul-Haq was given captaincy of the team, perhaps when the team in green was experiencing its worst period ever in the history of the game.

International cricket events ceased to happen in Pakistan following an attack on Sri Lankan team in Lahore in 2009. The team endured another blow and went through a lengthy scandalous period when three of Pakistan’s top cricketers were convicted of spot-fixing in England and were later banned for different lengths of time.

But thanks to Misbah’s brilliant captaincy, Pakistan eventually came out strongly and eventually became the top Test side for the first time in history.

Comparison has been made between these two captains despite the fact that they led the team in different eras and in very different conditions.

Recently, Shaharyar Khan, the Pakistan Cricket Board (PCB) chairman, unsuccessfully tried to ‘demystify’ the legend of Imran Khan, claiming that Misbah has been a better skipper than Imran Khan. Perhaps he might have been trying to take some credit of Misbah’s success.

Comparing Imran and Misbah is like comparing apples with oranges. To many, it seemed the comparison was politically motivated to demean Imran Khan.

Some writers also tried to portray Khan’s cricketing achievements as not-so-good by employing facts and figures, sometimes incorrectly and sometimes out of context.

A renowned writer recently adjudged Misbah a better Test skipper because of his better ratio of victory. Even a person with little knowledge of cricket would know that Tests in the era of Misbah became more result oriented -- thanks to efforts of ICC during the last decade.

Even if a comparison was to be made then it should have been the win-loss ratio, where Imran Khan has an edge over Misbah. The win-loss ratio for Imran Khan is 1.75 while for Misbah’s is 1.31. And if such facts are to be taken seriously, Javed Miandad has a better ratio with impressive 2.33.

There could be others with a better ratio but let us settle here with this considering only those captains who captained Pakistan in more than thirty matches.

The credit of Imran’s success as skipper has also been given to Miandad, Wasim Akram and Waqar Younis, but when it comes to Misbah, Younis Khan, Pakistan’s most prolific Test batsman, spin maestro Saeed Ajmal and Yasir Shah have all been neglected.

Before Misbah took over as captain, Pakistan had a couple of top international titles. One came in 1992 and another in 2009. If a team or any group of people can do something once, it has the ability to do it again. That gives confidence. And when such teams are discussed in media, they are called "former champions".

But the men in green didn’t know this feeling before the World Cup 1992. Even during most of the matches of that tournament, Pakistan players did not have such confidence. But Imran Khan did and his teammates still recall that incredible 1992 triumph and give due credit to Imran Khan for inspiring them to achieve the apparently "impossible".

Wasim Akram, one of the members of Pakistan’s World Cup-winning squad, said he had never seen a better captain than Imran Khan in the world, let alone Pakistan.

"I have worked with Misbah-ul-Haq during PSL and he is a very good captain but there is no comparison between him and Imran Khan," Wasim said. "Although Misbah has better records but when it comes to Imran Khan I have never seen a better captain than him."

Wasim added that it was useless to compare the two as Khan was an aggressive captain while Misbah is exactly his opposite.

Describing someone’s leadership skills just can’t be done by presenting facts and figures. Several aspects have to be taken into account and when comparing two captains of different eras, the changes in the game must also be considered.

For example, can any researcher quantify the impact of Imran Khan asking Abdul Qadir to grow a goatee before the tour of England in 1982? He told the English media upon arriving in England that he had brought a wizard with him who would baffle the English batsmen. And Qadir did that.

Imran was also criticised for picking inexperienced Inzamam-ul-Haq on trot during World Cup 1992 although he had been failing to perform. The bulky player played two very important wickets in the two most important matches -- the semi-final and the final.