In Balochistan, 500 militants have surrendered 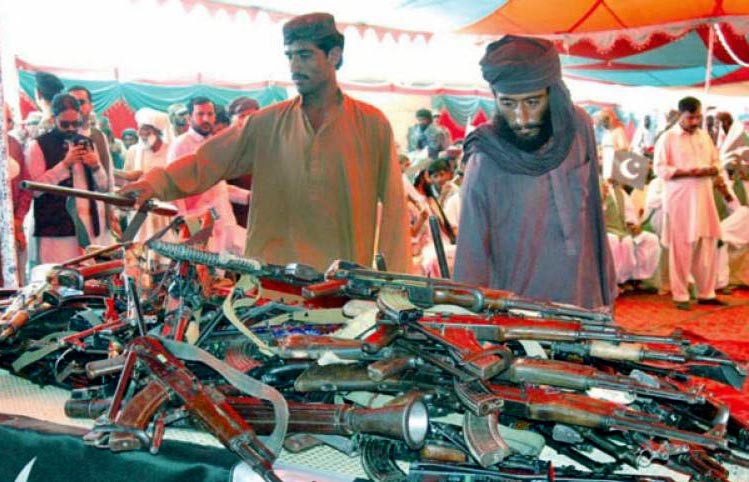 An old man walks up to the stage set up in the lawns of the Balochistan Assembly. He sports a white beard, holds a small national flag and carries a weapon. He moves towards Chief Minister Balochistan, Sanaullah Zehri, who is on stage, and hands him his weapon.

This man, an old insurgent commander, is among the 500 militants that, according to provincial government, surrendered in a ceremony held on April 21 this year.

This was not the first of its kind ceremony. On August 6, 2015, Prime Minister Nawaz Sharif approved the Peaceful Balochistan package to incentivize Baloch insurgents to surrender, and endorse the writ of the state.

As per the publicly announced details of the package, the insurgents who surrender will be paid between Rs0.5 million to Rs1.5 million, depending on their ranks in the organisations they leave to surrender.

A source in the provincial government who requested anonymity told this scribe that so far about 1,500 militants have surrendered in Balochistan after the announcement of Peaceful Balochistan. He claims that approximately 500 insurgents who had abandoned the armed struggle have been paid compensation while cases of others are in process. At the end of 2015, when Murree Accord was to be implemented, the frequency of such surrender ceremonies had increased.

Read also: TTP and after

Two things can be deduced from the process of surrender of insurgents in Balochistan. First, that no high profile surrender has taken place in Balochistan in the aftermath of the reconciliation process of mainstreaming insurgents. Here the term high profile is subjective and debatable, as there have not been cases as big as Ehsanullah Ehsan in Fata and Gulbuddin Hekmatyar in Afghanistan.

There is no information available on the scale of the success of this programme and how many insurgents or terrorists this package was able to bring into the mainstream.

Second, the focus of surrendering or mainstreaming of militants is restricted to Baloch ethnic insurgents only. There has not been any publicly announced case where a sectarian militant has surrendered or joined the mainstreaming process, like in Punjab and Fata.

Jan Achakzai, Special Assistant to Chief Minister Balochistan on the Media, says the Balochistan government believes that if militants want to return to a peaceful life they should be allowed and facilitated. "In any counter terrorism and counter insurgency strategy, the main objective is not to fight till the last soldier. If militants are sufficiently weakened and want to lay arms, recognising the state’s position of strength, they should be allowed to surrender."

He adds that this should also be true for violent extremist groups in Balochistan. "So they have a pathway to return to a deradicalised peaceful life".