Toy car for the boy, kitchen set for the girl

For most girls in our part of the world, destiny is very conveniently compartmentalised at the time of birth 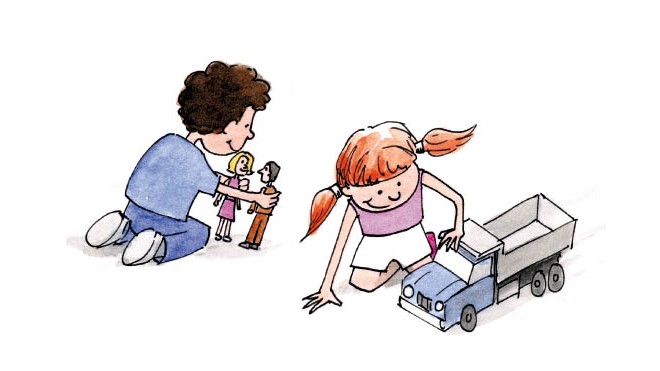 The most frequent words of prayer uttered for me by my mother were for my ‘naik naseeb’ (a happy and secure future). As a young child I never knew that this actually was for a blissful marital life.

Fortunately or unfortunately, this connotation of ‘naik naseeb’ has deep-seated roots in our mindsets. For most girls in the subcontinent, destiny is very conveniently compartmentalised at the time of birth. The ultimate dream destiny for them is to be married to a prosperous spouse, the sooner the better. A promising career is considered to be a men-only zone. No wonder a female child is often seen as the burden while a male child’s birth is celebrated.

Gender biases and prejudices are such an eternal part of our society that we almost act unknowingly according to them. A toy car for the boy and a kitchen set gift for the girl steals away the freedom of choice even at a very young, albeit impressionable, age.

Many pre-set rules tend to chalk out the girl’s entire life. If she is amongst the luckiest one to get access to education, it has to be confined in a certain way. A gold medalist or a brilliant student at school/university must leave her studies soon enough. The sole reason is that her doctorate degree would make her appear over-age for the match-seeking families.

The flight is limited and defined as per fixed biases and customs. No matter how educated, well read or accomplished a girl is, she eventually shall be judged and grilled on the typical criteria. Someone far less educated than her shall still have the right to either reject or accept her just because of gender superiority embedded in our society.

In an urban environment, the civil society condemns customs like honour killing and Swara. I believe it’s the mindset that needs to be condemned. And, this mindset is present even in societies where these customs might not be practised. In a patriarchal setup, the girl child’s voice is suppressed in most convenient ways. Saying no or taking an independent decision is not an option. Ironically, where she is treated as weak, she is also the bearer of the family’s honour.

Why is our entire emphasis on raising a future bride? Why can’t we raise our daughters to be strong individuals? A daughter treated equally inside the house can find and mark her path with confidence outside the house.

In Swara, the female minor is given away to the aggrieved family as compensation by the accused family. It takes place in cases of abduction, murder or adultery. The female ends up paying the price for someone else’s deeds, till her last breath.

The degree of intensity, the circumstances, labels, and situations may vary from place to place, and from person to person. But generally, the girl lot experiences things that are universal in nature. The girls lead a life that is largely ‘pre-ordained,’ so to say, and preset by someone else in their lives -- usually a man and/or a family at large whose honour depends on her solely.

The society very conveniently awards roles to her. And, at the end of the day, her measure of success will still be a (apparently) sorted married life, with kids and stuff, you know. And it is even more sorted if she is lucky enough to give birth to a male child.

The fake-happy housewife syndrome, which was identified in the 1920s when feminism was much debated, is still there. A girl’s main ‘function’ or reason for existence is often still reproduction and serving her man.

Even in developed countries, women are reported to be fighting misogyny. Why it happens is an endless narrative. My point is, why is our entire emphasis on raising a future bride? Why can’t we raise our daughters to be stronger individuals? A daughter treated equally inside the house can find and mark her path with confidence outside the house.

Toy car for the boy, kitchen set for the girl