Ghanti proved to be a well-intentioned satire 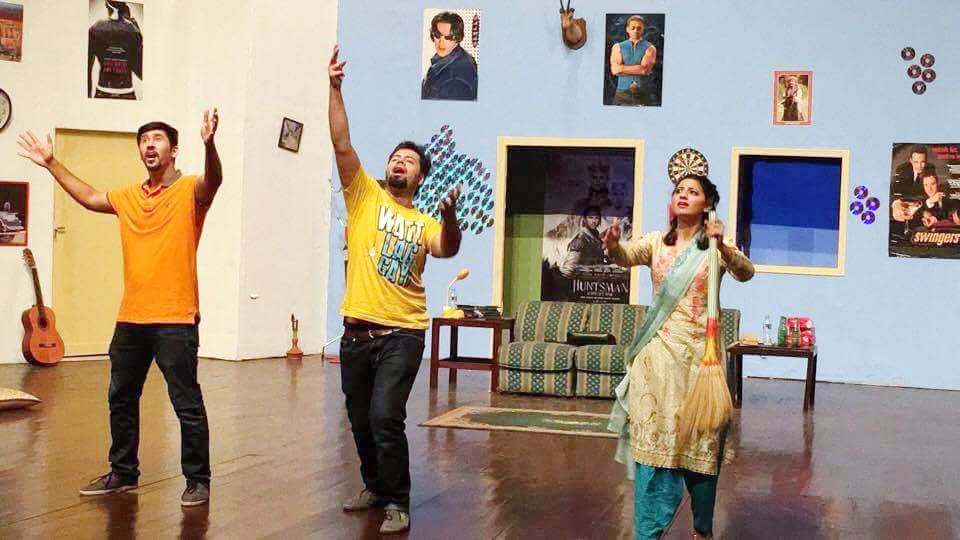 An amateur production, the play, Ghanti, was recently staged at Alhamra The Mall. The play started an hour and a few minutes later than the said time. But, I must say, it was worth the wait. It turned out to be a thoroughly entertaining performance.

The main plot of Ghanti revolves around Muzaffar (played by Hashim Imran), his friends -- Babar (Abdullah Nosherwan), Rashid (Rehan Zia) and Party (Daniyal Saleem) -- and his maid named Kaneez (Amani Durrani). As the curtains rise, a room full of posters belonging to famous films and actors is revealed. One couldn’t help noticing a rustic bell placed on a wooden table on the extreme left of the stage. However, power-packed performances by actors who enter the stage followed by multiple ‘ghantiyaan,’ steal the show, making the audience laugh repeatedly with their exchange of dramatic dialogues (culled from different Indian movies) and dances on cheesy Bollywood numbers.

While the trio of friends is shown to be busy partying with Party, a deadly war ensues right at their doorstep which they shrug off as just another "party" outside, slightly different from their own.

All this time, Muzaffar is shown to be confused about his sexual orientation which at first seems vulgar and humorous but the writer’s true purpose comes to light when a bloodied soldier (Saud Jutt) uses this confusion of his as a metaphor for the country’s perplexity about its identity and patriotism.

The ‘ghanti’ that marks the entrance of the soldier shifts the play’s tone from humorous to ominous as he asks them existential questions and awakens their patriotism right before succumbing to his wounds. His soliloquy, however, is interrupted by an argument between him and Muzaffar over which of the two cities -- Lahore and Karachi -- is better. The mockery of our countrymen’s aimless banter is hard to miss at this point.

The metaphor of bell seeks to awaken the nation that is oblivious to the war that is being fought at the borders, before it’s too late.

Moved by the soldier’s words, when Rashid picks up his gun in an attempt to attack the enemy which they all refer to as "Hullay Hullaray Hullay Hullay Hullay," he is immediately killed. Soon after, they all are killed as a bomb is thrown inside the room through a window. Hashim Imran the writer’s message echoes in the silence after the blast: they found their will to fight for their country, but it was too late.

Thus, the metaphor of bell seeks to awaken the nation that is oblivious to the war that is being fought at the borders, before it’s too late.

The play proved to be a satire, replete with sardonic jabs. All in all, it was a treat to watch.