Supremacy of the de facto

Long overdue, we desperately need to revisit the skewed equation of power between military and civilian institutions 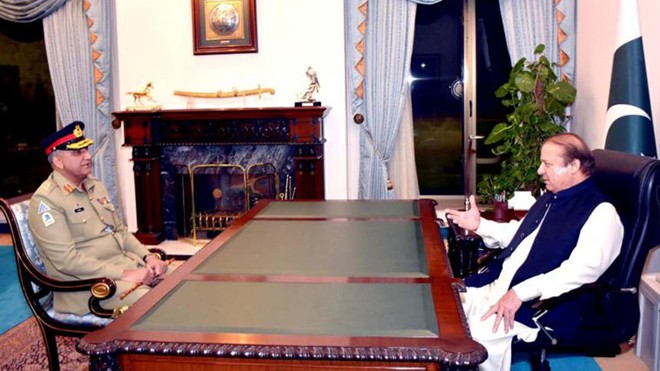 Last week, the concerned citizenry was astounded over the latest stunning and public rebuke by the Inter-Services Public Relations (ISPR) to the civil dispensation. The pro-democracy voices want civilian supremacy: the revisiting of the skewed equation of power in favour of the civilian institutions.

Where does Pakistan stand on the count of civil-military relations?

In principle, civilian supremacy is enshrined de jure. Jinnah’s August 14, 1947 speech adorns the official page of ISPR, the military’s media wing: "Do not forget that the armed forces are the servants of the people and you do not make national policy; it is we, the civilians, who decide these issues and it is your duty to carry out these tasks with which you are entrusted."

Article 243 of the 1973 constitution, envisaging the federal government’s control and command over the armed forces, vests the authority of appointing the chiefs of all three arms of Pakistan’s armed forces and joint chief of staff in the office of the president who acts on the advice of the prime minister. Similarly, article 245 (1) enshrines that it is the federal government under the control of which the armed forces shall defend the country against external aggression and will act in aid of civil government when required to do so.

Under article 244, every member of the armed forces takes oath, as set out in the Third Schedule, and solemnly swears that he or she "….will uphold the constitution of the Islamic Republic of Pakistan which embodies the will of the people."

What then goes awry?

Any informed analysis on Pakistan’s civil-military relations tells you that the skewed balance of power in favour of the military, especially on the security front, has a long history that precedes even partition. The north-west India, areas that comprise today’s Pakistan, constituted British India’s security state. Security considerations prevailed over welfare and development not least because, as Muhammad Waseem argues, the colonial Britain had lately introduced representative institutions in Punjab, Sindh, the then NWFP -- now Khyber Pakhtunkhwa -- and Balochistan unlike in the south east areas of Bombay, Bengal and Madras that make India.

Post independence, given a number of issues plaguing the relations between the two states, the asymmetry in the power equation of the succeeding state of India and the seceding state of Pakistan locked the two states in what was later aptly described as ‘India-Pakistan enduring rivalry’. The three military coups in the politically chequered history of the post-colonial state of Pakistan just established that past was the future trajectory of the country: a ‘viceregal system’ whereby the executive, non-elected offices, had a domineering role at the cost of representative institutions.

Politicians may be "corrupt" and "inefficient" -- though they are not the only ones to be so -- free, fair and timely elections perform the function of sieve by separating the pure from the dirt.

The ISPR’s rejection of the recommendations of the committee formed after the Dawn Leaks is the latest salvo about where the actual powers over security matters lay. After the so-called Dawn Leaks, a report on a civil military meeting in October 2016 whereby the civil leadership reportedly asked its military counterpart to "act against militants or face international isolation," the government constituted a probe committee in November 2016 to ascertain the source and the underlying reasons behind the leak, billed as "false and fabricated" and a "breach of national security" by a Corps Commanders meeting held in October 2016.

Back to March, the uproar over Husain Haqqani’s assertion that his "…connections eventually enabled the United States to discover and eliminate bin Laden without depending on Pakistan’s intelligence service or military…" in an op-ed in The Washington Post on March 10 advertently and inadvertently reinforced the historical fact: security establishment has a near monopoly over security policy.

Theoretically, the ex-ambassador, empowered by the then prime minister -- the chief executive in a parliamentary democracy -- to issue visas to Americans including probably intelligence officials back in 2010, seemingly operated within legal parameters.

On March 19, in a television programme, Haqqani, grilled about inquisitive questions related to his role in visas issuance, hinted at civil-military collaboration in the whole process, a position corroborated by Asif Ali Zardari and Hina Rabbani Khar, the president and the foreign minister at that time respectively.

The ensuing commotion in electronic, print and social media was not about whether Haqqani or civil government for that reason acted legally or not but whether the duo issued visas to Americans without the involvement of security apparatus or not. Legality did not matter. The question is how to rectify this imbalance?

Transforming the de jure status of civilian supremacy into de facto necessitates breaking with the colonial legacy of viceregalism by evolving and strengthening civilian institutions in tandem with their military counterparts. Post partition, India inherited far more powerfully organised bureaucratic and military structures than Pakistan. Whereas in India’s case, democratic institutions blossomed with uninterrupted democratic rule, democratic process was thrice derailed in Pakistan, hindering the very evolutionary process that is so essential for the development of democratic institutions.

Politicians may be "corrupt" and "inefficient" -- though they are not the only ones to be so -- free, fair and timely elections perform the function of sieve by separating the pure from the dirt. One great lesson we can derive from western democracies is that strengthening civilian institutions strengthens nations. Long overdue, we desperately need to call time on disrespecting the civilians!

Supremacy of the de facto