A wave of joy

In summers once a week, we would forget all else; tuck our long, loose shirts into our pants and run into the waves, daring them to try and take us 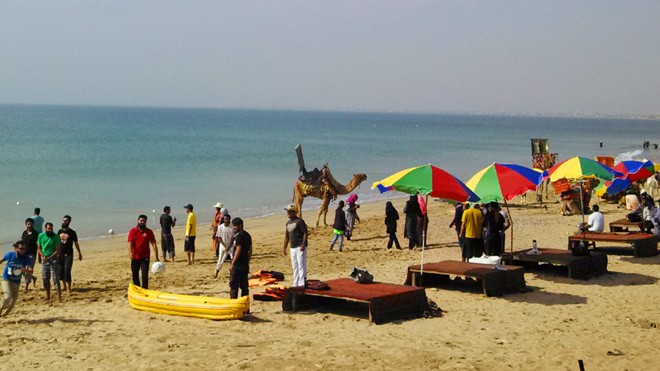 A large part of my childhood summers were spent observing the mercury level in a thermometre in my parents’ bedroom. This was not because I was fascinated with thermal physics, but because my mother had an iron-clad rule about how the air conditioner could only be switched on when Karachi’s temperature hits 40 degrees Celsius. Thirty-nine degrees didn’t cut it. But at 40 degrees, the AC was switched on to cool our moods. It was such a pleasure to spend the day without sweating or being told "this is nothing, zarra socho Jahannum main kitni garmi hogi".

According to Zadie Smith, British novelist and essayist, there is a distinct difference between joy and pleasure. Pleasure is common, every day, appreciated but not rare. Summers are filled with pleasures: when a friend surprises you with a Jet Sport, the wafting smell of your mother’s Sunday biryani, watching your niece experience rain for the first time, gently touching a perfectly bloomed sunflower, sipping a chilled drink on a hot day. But joy is more difficult to attain, it’s a rare kind of "human madness" says Smith, a mixture "of terror, pain, and delight".

Let’s walk through the difference. Rain in Karachi brought many pleasures. My family and I sat by the terrace, munching on pakoras, and popcorn that we had popped in the biggest pot we owned, listening to my father narrate stories to us from memory. We savoured the petrichor, the distinct scent that comes along with the first rain after much heat.

Invariably, however, a mere hour of the thunderstorm (in Karachi there are only thunderstorms) would cut off electricity. This was not modern-day, announced load-shedding; there was no tweeting at K-Electric. This was the real deal: no electricity for the next 15-20 hours, because Karachi’s power lines handled rain about as well as Kamran Akmal handles catches.

The thunderstorms left behind humidity, darkness, moths, hungry mosquitoes, wet, angry cats looking for shelter, and mini-floods sprouting in parts of your house you didn’t know could hold floods. The delight the rain had brought was now mixed with the terror of a long, humid night ahead.

According to Zadie Smith, there is a distinct difference between joy and pleasure. Pleasure is common, every day, appreciated but not rare. But joy is more difficult to attain, it’s a rare kind of "human madness" says Smith, a mixture "of terror, pain, and delight".

And when you thought it couldn’t get any worse, it got better. The ordinary pleasure of rain turned to joy when my father announced that we will all be sleeping on the terrace. Because there weren’t too many mattresses, the 8-year-old me had to sleep snuggled with her family, under the open sky, terrorised by the cats lingering around, a little pained by mosquito bites, but protected by a parent on both sides. Pure joy, brought about only a few times a year, only in the summer. The pleasure the rain had earlier brought paled in comparison to this joy.

Another pleasure of the Karachi summer was the beach. Not having access to a beach hut didn’t stop a group of wild, unruly teenagers who had an entire free summer from weekly trips to the beach. We laid down a blanket at the beach and called that space ‘our hut’, and used a circle of trustworthy friends to change clothes at the end of the day.

Consuming all the goods we had hauled in from the city on our blanket was a pleasure. Looking at the endless sea, another pleasure. Talking, laughing, joking were all safe sources of pleasure.

Then came the time to go swimming. I don’t know how many of you have tried swimming in the monsoon waters of Hawk’s Bay or French Beach or Sand’s Pit (or Sand Spit, depending on what type of person you are), but those who have can never forget it, and those who haven’t can never imagine it.

Yes, what we did, on a too regular basis, was (heavily) tinged with fatalism. Yes, at times, when a wave took me down for longer than I had anticipated, my mind would get cloudy and I would almost forget to push back the water and fight for air. Yes, at times, when the water violently threw us up, we fell on rocks, and bled. At different points, I remember bleeding from my arms, feet, and back. "It’s okay, go back in the ocean, you need the saltwater to disinfect the wound," we would laugh and tell each other.

We were so stupid. We were so joyous. A true mixture of pain, terror and delight. Fighting those summer waves with your friends by your side was pure ecstasy.

We weren’t ignorant. We had heard the story of Seemi Aunty’s daughter being pulled away by the water, never to return. We had read about the police officer who died trying to save his toddler son from the waves. The boy survived and is probably miserable. We had seen tv reports about the scores of people who died each summer at Sea View.

And yet, once a week we would forget all else; tuck our long, loose shirts into our pants (because god forbid our stomachs and backs are on display as we plunge towards death) and run into the waves, daring them to try and take us.

As we grew older, this fatalistic joy was replaced with "my mother won’t let me come because she’s afraid I will get tanned before my engagement," or "I can’t go this week, I have a story/project/presentation due." And that was that.

Now, summer is still full of pleasures. The pleasure of mangoes and jaamun, motia and marigold, rain and petrichor. But, joy is less regular. I suppose that’s okay, since one form of pleasure can always be replaced by another, but the human madness of joy, once experienced, is difficult to replace.

The article was published under the headline ‘A wave of pleasures’ in The News on Sunday on May 7, 2017.

A wave of joy