The battle that was never entirely legal

The crisis of leadership that afflicts us 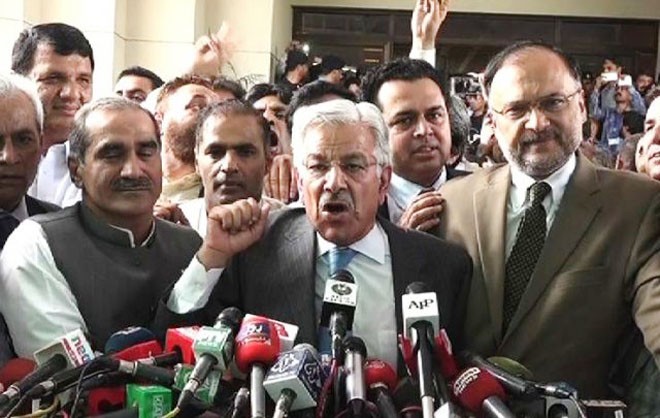 This is what the apex court of the country ruled about our sitting Prime Minister: at worst he is disqualified because he is lying to the nation about his offshore wealth; at best he gets the benefit of doubt because no conclusive evidence, albeit sufficiently suspicious circumstances, exists. The majority has asked him to face an investigation committee, a process to be supervised by the Supreme Court. And, depending on the findings made, this can result in institution of criminal proceedings.

So the PM survives but he has not gotten a clean chit from the Supreme Court. This country, beset with problems of terrorism, a crippling energy crisis, political turmoil, a broken system of education and healthcare does not need a prime minister facing an investigation for personal acts and omissions. Neither of these are reasons to celebrate: yet that is exactly what PML-N leadership shamelessly did.

A few words here about the ruling of the Supreme Court. It makes absolutely no sense for people to start blaming the judiciary for a decision not in accordance with their wishes. While understandable, criticism rooted in not-what-I-wanted reasoning ignores why courts and legal processes exist.

The majority as well as the dissenting rulings have a lot to recommend them. Reasonable people often, can and do, disagree about processes and outcomes involved in high stakes litigation. For the Justices who dissented, the case was clear: a sitting Prime Minister was not being truthful. The court could not look away. Facts, even if slightly disputed, were clear enough for answering the most important question: did he lie? Yes, came the answer. Sharif lied, was not being truthful, and therefore stood disqualified. Disqualification and criminal conviction remain distinct issues in this line of reasoning. The latter necessitates a full blown trial, not the former.

The majority’s view, also legally completely defendable, is equally damning for Sharifs and the PML-N: the people are being kept in the dark and there is clearly something fishy. There is enough suspicious activity for the prime minister, and others implicated, to face an investigation committee. And while the majority clearly agonised over the state of affairs, it also did not want to rewrite the Constitution or fill in gaps in the legal system -- a particularly sound view -- and decided not to supplant its own findings for a job best done by a properly empowered investigation team. These are two opposing viewpoints but perfectly comprehensible -- arrived at by justices with highly impressive professional credentials.

The Supreme Court derives its strength from the Constitution and acceptance of its authority; both underpinned by we the people. And we, the people, can still hold accountable those who lied. This is not over by any means.

The Supreme Court did not rule that Sharif is a clean man so anyone saying that this is a pro-Sharif court is clearly being ignorant. The Supreme Court, like you and me, laments that we are consumed by this crisis. Even the majority’s ruling bemoans lack of moral and political integrity.

And maybe this Supreme Court ruling will result in helping us understand that this battle was never entirely legal -- and it should not be. Nawaz Sharif’s conviction for lying is one thing; his moral authority to remain in office quite another. Former depends on the courts, the latter on the people. Decisions about the moral authority of a political office holder to remain in office should ultimately be made in the political realm.

Yes, in an ideal world Sharif should not be able to hide anything. And he may well still face a criminal investigation. And for that there is now a committee. But consider this: if he or his party wins the next election then what does it say about us as a polity? That is not something the Supreme Court can fix. That course correction is within our power; something that we the people can and must take up. Sharif and Dar can, and should, still resign because of pressure from the people.

Politically, the sitting PM is now very weak vis-à-vis the opposition as well as other state institutions moving forward. There are those who, legitimately, raised the issue whether it made sense to include people from intelligence agencies on the Joint Investigation Team (JIT) set up by the Supreme Court. But had it been just another investigation team then the same people would have criticised lack of pragmatism in the majority’s ruling. Sharif and those implicated with him are not off the hook -- not yet.

There are answers that they need to provide. Expect the petitioners in these cases, as well as members of the public, to move the top court for contempt if PM or others involved with him try to stall the investigation. Now this is between the political executive and the judiciary; and the judiciary will assert itself. When it comes to reputations, one’s own always matters most. So the top court will not sit idly by and let the powerful stall these proceedings.

Photos of members of the ruling party grinning ear to rich ear is a stark reminder that we live in a land where the powerful will celebrate lack of accountability. It takes a deep rooted sense of entitlement and corrupted by privilege worldview to rub it in everyone’s faces that "we got away with it".

The sitting PM, his family, Ishaq Dar currently represent the crisis of leadership that afflicts us. Judicial restraint is not the reason we are suffering this. The reason we suffer abuses of power is disenfranchisement at multiple levels -- afflicting our structures for political, moral or even legal accountability. That is, what needs to be fixed. And the first step would be to ensure that those who mock our ability to hold them accountable do not win another term. Those from PML-N who are implicated in Panama Papers scandal may also become a political liability in the coming weeks and months. The opposition and the general public must keep up the pressure. If you are the PML-N’s opponent, you will milk this good. Oh yes.

A Supreme Court decision to send home (or to prison) those who are in power and lied to us was only one of the many options available. Ultimately, the Supreme Court derives its strength from the Constitution and acceptance of its authority; both underpinned by we the people. And we, the people, can still hold accountable those who lied. This is not over by any means.

If you know or love even one person in Pakistan who, you think, deserves a future and leaders better than those we have known till now then you have reason to keep demanding answers. This is a politically neutral step. No political party, no constitution, no tenet of loyalty or ideology asks us to be blind to corruption or suffer while we are mocked.

The battle that was never entirely legal