Marriages are made in Heaven -- or Here!

The bureaus and centres offering to find you the right match may be in the business to make money, they are increasingly considered a reliable service 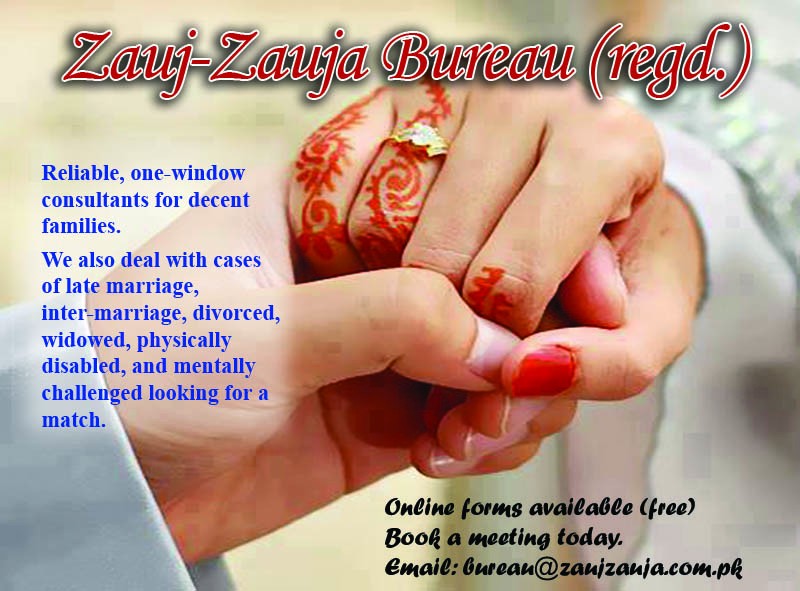 It is becoming increasingly difficult for the parents to find the right match for their children within their families and friends, which leaves them with no option but to rely on marriage bureaus, centres, and consultants, as well as matrimonial adverts in newspapers and online.

Sometime back, these bureaus did not exist in such great numbers as they do today. Also, the families were shy to approach them; they would rather contact a ‘rishtay wali khatoon’ who was referred to by someone they trusted, and who would provide them with ‘options’ right at their doorstep.

Today, the marriage bureaus and consultants are seeing a boom, so to say. This, despite many reports of loopholes, fake organisations, etc. These are considered a blessing for the common people, especially those who have a chronic bachelor in the house.

Talking to TNS, a woman sitting at a marriage bureau office in Defence says, "It was thanks to this place that I was able to marry my two daughters. Now I have convinced my neighbour who’s been looking for a suitable husband for her aging daughter, to try their service."

"Marriage consultancy is a great relief for most people," says Mrs Shah, who runs a setup in DHA. "I’ve been running this office for the past three years. My own bad experience with my children’s spouses convinced me to open the consultancy."

Mrs Shah claims to have served "dozens of families through my bureau. In the beginning, I did not have a proper system of registration. I would have to personally give contact numbers to the interested families who would then contact each other directly, without even letting me know. Obviously, this way they were able to avoid paying us our dues.

"I’ve learnt my lessons," she adds. "Now I have formalised everything; we have printed forms available in the office. There’s a very nominal registration fee. The next step for the client is to get the contact of those who are registered already. If a marriage is decided between the two parties, they, as per the agreement, have to pay me my commission."

"Marriage consultancy is a great relief for most people," says Mrs Shah, who runs a bureau in DHA. "My own bad experience with my children’s spouses convinced me to open the consultancy."

Mrs Shah mostly works in posh areas of the city. "The people trust me," she claims. "They come to my office with references.

"There should be qualified people running the marriage consultancies, but mostly this isn’t the case. People are in the business only to make money, even if they have to fool innocent families."

The marriage consultants offer a variety of choices, making it easier for families to find the right match for their sons/daughters. Unfortunately, some of them have been found to fake contact addresses. Also, they give contacts of dummy clients to the original ones in order to satisfy the latter.

Muhammad Khalid, a marriage bureau consultant, charges Rs1,000 registration fee and Rs30,000 as commission from both the parties once the marriage is announced.

"This is a very sensitive job, and comes with a lot of responsibility," he says. "We first note the bio-data of a client on a form besides ensuring that the party is genuine. It is only after we have acquired complete information do we give them the contacts [of the other party]."

According to Qari Taj Ahmad, who runs the Defence Marriage Bureau, "It is not always easy to find a suitable match through a marriage bureau; the ratio is 2-3 marriages per 100 contacts."

Matrimonial classified ads are the other most popular option the people go for. Interestingly, it is not just newspapers, but even auto rickshaws are found carrying large poster ads of marriage bureaus.

Reportedly, these ads are given by both the families and marriage consultants. Some families don’t like to involve a marriage bureau and they specify the same when placing the ads.

On the other hand, the marriage consultants design their ads attractively, often with tall claims. Consider this: "Immediate proposal available for highly qualified people, CSS officers, doctors, engineers, army officers, businessmen of every caste and sect, Shia or Sunni, living in Pakistan or abroad, from the age 18 to 60."

Moreover, there are organisations, volunteers and seminaries such as Jamia Ashrafia and Dawat-e-Islami that offer similar services free of cost.

Mohammad Abdullah, a volunteer, says, "Most people avoid going to marriage bureaus because they feel these can’t ensure them privacy and security. Also, a lot of these [bureaus] are there only to mint money. That’s where we come in."

Abdullah has been in the field for the past 20 years now. Over this long period, he claims to have helped hundreds of families and individuals find the right match. "In return, I never asked for not received a penny or any other favours. I just tell the people to pray for me."

Marriages are made in Heaven -- or Here!