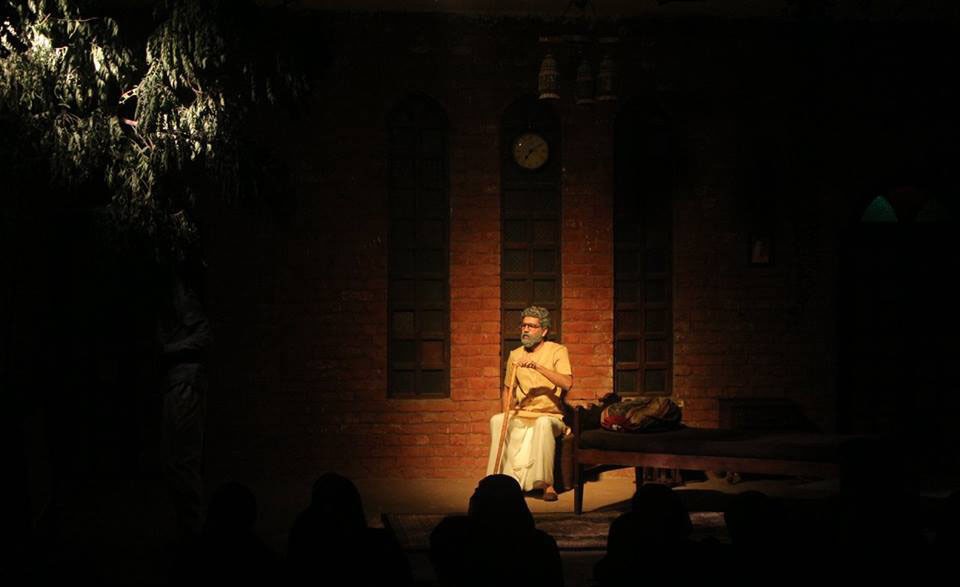 Nim Di Chhavein is truly a play for the lovers of Punjabi literature. I realised this fact as I watched a stage performance of the classic script by the late journalist and man of letters Safdar Mir, alias Zeno, on the last day of Tamasha Festival 2017, at Alhamra, The Mall.

Directed by Faiz Rasool, the performance made an effective use of a cast of merely five characters, a simplistic stage setting, and minimal props. It also boasted powerful live singing by Manzar Abbas Shah and Haseeb Hussain that seemed to capture the audience’s attention through the course of the proceedings.

Nim Di Chhavein is about star-crossed lovers Mumtaz (played by Asma Ilyas) and Bala (Faizan Rasheed), who happen to be cousins and are separated by the family’s inability to accept their love for one another. When the curtain rises, the grandfather is in the house. He joins the worker perched a charpoy, under the shade of a neem tree. The rest of the play takes place in this setting.

The grandfather, Baba Jee (Hafiz Zain), is a plain man who, only a few minutes into the play, admits to Mumtaz, "Meray laee te aes neem diyan chhavaan ee batehriyaan ne!" The lady’s father Mian Jee (Ammar Ahsan), who is a materialistic person, is shown to be thirsty for revenge against "Hashmi Transports" that apparently rendered him out of business.

While Bala’s proposal for Mumtaz is rejected by her father because of his lesser social status, the news of his financial success in Karachi is expected to lead the father to change his mind. Both the men have a heated discussion over whether Mumtaz should be made to marry Bala now, Baba Jee being against using her as a mere commodity in the games men play. After dismissing the topic, when he leaves the house to run an errand, Mian Jee uses the opportunity to coerce Mumtaz into getting Bala to marry her, threatening to take his life if she refuses to comply. The highly charged scene has Mumtaz imploring her father not to reduce her to a mere item of trade. But her efforts go in vain. At this point, the singer chants a poem that bemoans the fates of daughters being different from those of sons.

Nim Di Chhavein is about star-crossed lovers Mumtaz (played by Asma Ilyas) and Bala (Faizan Rasheed), who happen to be cousins and are separated by the family’s inability to accept their love for one another.

Things take a melodramatic turn as Bala and Mumtaz meet, confess their love for one another until Bala realises that she wishes him to help resurrect her father’s family business. Miffed, Bala leaves, with the glorious declaration: "Ona laee te aes neem diyan chhavaan ee batehriyaan ne!"

Mumtaz tries to stop him but she can’t. She breaks down. The audience hears her cries trail out, as the closing song is sung.

Mumtaz thus emerges as a symbol of the helpless woman in a patriarchal society, who must do whatever she is told to do, while the men in her life feed their own egos.

Music had a major part to play throughout. It served to heighten the emotional impact Nim… had. The acting, direction and dialogues were also commendable.

On a side note, it is advised that you don’t ever sit near the entrance of the hall unless you want to be stomped on limitlessly, flashed at by countless phones’ torches, and distracted by the noise made by the late arrivers.