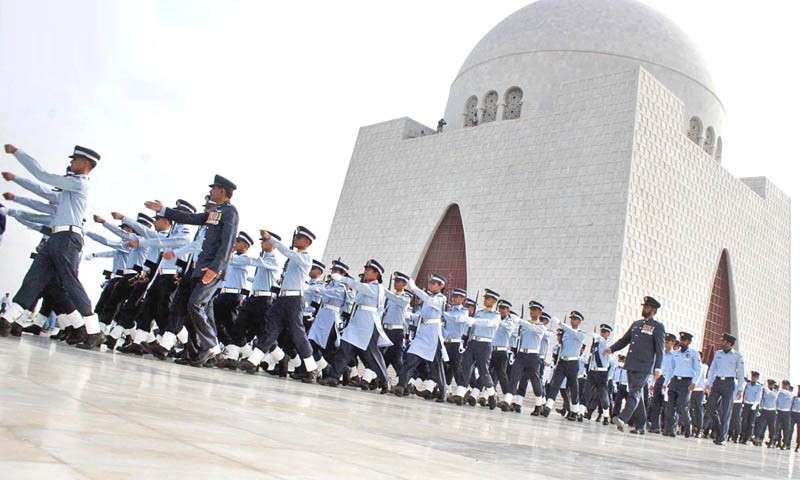 The Objectives Resolution, passed by the first Constituent Assembly on March 12, 1949 under the leadership of Liaquat Ali Khan, is undoubtedly one of the most important documents in the constitutional history of Pakistan -- it served as a preamble for the Constitutions of 1956, 1962 and 1973 and eventually became part of the 1973 Constitution when the Eighth Amendment was passed in 1985.

Its proponents claim that it confirms the true genesis of Pakistan by reiterating that "sovereignty of the entire Universe belongs to Allah alone and authority should be delegated to the State through its people under the rules set by Allah". So it has become a blend of Islam and Western democracy.

According to critics, it was a departure from the ideals of Quaid-e-Azam of equality for all citizens and separating religion from State. Using it as a ploy, they say, General Ziaul Haq managed to convert Pakistan into a quasi-theocratic state.

Liaquat Ali Khan, while explaining the context of the resolution in his speech delivered in the Constituent Assembly on March 7, 1949 declared it as "the most important occasion in the life of this country, next in importance only to the achievement of independence." He said that "as Muslims, we believe that authority is vested in Allah Almighty and it should be exercised in accordance with the standards laid down in Islam." He added that this preamble had made it clear that the authority would be exercised by the chosen persons; which is the essence of democracy and it eliminates the dangers of theocracy.

The events that followed proved him wrong -- the clergy started asserting its own authority instead of that of Allah by saying "religion is what we interpret".

The logical outcomes of the Objectives Resolution were: (a) movement against Ahmadis, (b) clergy’s campaign against Ayub Khan’s regime in the name of Islam, (c) support of religious and right wing parties to military crackdown in East Pakistan culminating into dismemberment of the country and (d) Zulfikar Ali Bhutto’s compromises with religious leaders. The matter did not end there. It paved the way for an 11-year dictatorial rule of General Ziaul Haq, with his legacy reflecting in Nawaz Sharif, which is still haunting us. Militants and extremists derive their ideological strength from the notion that real authority rests with Allah and they are waging jihad to make Pakistan a true Islamic polity.

Objectives Resolution, being part of our Constitution, though emphasises existence of a Muslim state based on the principles of justice and equity for all, contradicts the concept of a state having no sectarian connotations. Shariah cannot be free of sectarian biases. Thus, we cannot reconcile the two conflicting ideas.

The idea of Islamic state has to be construed innovatively to create a civic society and not a state religion through constitutional command as done through Objectives Resolution.

For example, in Indonesia, the debate whether you can have an Islamic state was a long drawn one with much depth, and they finally came to the conclusion that Islam and politics are linked, not through the state but through a civic society. It means that if you are a socially-conscious Muslim, you ought to bring your own moral and ethical outlook, express it openly in a civic context, debate and discuss it. Obviously, this has nothing to do with declaring Islam as state religion.

The idea of Islamic state has to be construed innovatively to create a civic society and not a state religion through constitutional command as done through Objectives Resolution.

Dr. I.H. Qureshi, the chief author of the Objectives Resolution, a well-known academic historian admitted: "Resolution was quickly prepared and passed ‘in a snap’ at a meeting of the Muslim League Party." At the time of presentation of Objectives Resolution, Pakistan was not an Islamic republic. Its structure was republican fully in line with the Indian Independence Act of 1947. After becoming "Islamic Republic", we have miserably failed to reconcile these two conflicting objectives. The concept of an "Islamic State" logically calls for decision-making in the hands of ‘pious ones’ certified so by the clergy!

In March 2016, the Supreme Court of Bangladesh, while reconfirming that Islam is official religion of the country, made it clear that the state is secular, pluralistic constitutional democracy. The court in its decision of July 28, 2010 barred the use of religion in politics. The verdict, however, did not affect constitutional amendments that made Islam the Muslim majority nation’s state religion in 1988. The main opposition Bangladesh Nationalist Party, which was then allied with two Islamic parties, said it would appeal the verdict. That appeal was rejected in 2016. Bangladesh’s original constitution barred the use of religion in politics.

Many historians are of the view that dismemberment of Pakistan in 1971 exploded the myth that the "real" purpose behind creation of Pakistan was establishment of an Islamic state. According to them, the two-nation theory, based on the foundation of religious divide of Hindus and Muslims, received irrecoverable setback when Bengalis were maltreated by the ruling elite of West Pakistan that ultimately led to the division of the so-called Muslim state, proving that socio-economic factors, and not religion, play decisive role in politics.

Dr. Ajeet Jawed in Secular and Nationalist Jinnah documented that Quaid-i-Azam wanted a secular Pakistan. Throughout his political career, he struggled against both Hindu and Muslim extremists. After independence, the feudal class with the help of its cronies -- bureaucrats, clergymen and men in khaki -- soon managed to hijack the new state and converted it into Islamic Republic--a mere nomenclature. Whereas, the politico-legal system remains Western -- what was given by our colonial masters.

Islam does not permit feudalism and concentration of wealth and its main stress is on the empowerment of the have-nots. Even in the very beginning, these classes tried to tamper with the famous speech of the Quaid, but failed to do so as Dr. Ajeet said in his book: "It was allowed to be published in full only after Dawn’s editor, Altaf Hussain, threatened those who were trying to tamper with it to go to Jinnah himself if the press advice was not withdrawn."

For building a secular Pakistan, Dr. Ajeet writes, "the Quaid sought the help of Khan Abdul Ghaffar Khan, because, as he said in his letter to Badshah Khan, he was "surrounded by thieves and scoundrels" through whom he could do nothing." With a mass of evidence, Dr. Ajeet has established that the Quaid remained a secularist and nationalist up to the last moment of his life.

I. A. Rehman has summed up the entire debate aptly in his article, Jinnah’s new Pakistan is possible, as: "Those who wish to save or reconstruct Jinnah’s Pakistan will do well to avoid following the Quaid’s actions that were determined by time and circumstance….. in order to progress Pakistan must continue to be defined by a firm commitment to constitutionalism and the model of a welfare state, sovereignty of the people, and equal rights for women and members of minority communities…it is necessary to retain Jinnah’s vision of Pakistan, subject, of course, to changes in details demanded by contemporary realities…. all those interested in building this Pakistan must realise that they will not be successful without going beyond the August 11 speech and that state-building cannot be done by think tanks alone."

Hussain Nadim in his op-ed, Get over Jinnah’s Pakistan, has opined that the unending debate about ideals of Quaid is not serving any useful purpose, rather it is "polarising" society. He says that there should be a more general consensus "such as: Jinnah only wanted a prosperous Pakistan". He claims that "the debate on Jinnah’s Pakistan is not only redundant but has gotten into a dense framework of complexities, largely because both sides fail to understand the ‘political and contextual angle’ of Jinnah’s speeches, that we have actually lost the purpose of what exactly we need to take out from the debate on Jinnah’s vision". Since any further dialogue and debate on such a topic, he says, is unlikely to get us anywhere, it is better is "to change the debate in our curriculum, media and households" and "we need to start asking the right questions to reach the right answers. To begin with, let us ask what we want today instead of what Jinnah wanted in 1947".

The points raised by Hussain Nadim are worth consideration. The more relevant questions in today’s Pakistan were raised by Chief Justice of Pakistan in his farewell address on the retirement of Justice Amir Hani Muslim when he said: "Rule of law is fundamental for the economic, political and social development of a society. Rule of law is not limited to the protection of individuals’ rights and resolution of disputes in accordance with law but also includes an independent and effective judiciary, safeguard against abuse of power and a law abiding government. The goal of an egalitarian society cannot be achieved without establishing the rule of law within government institutions. This can be achieved through the elimination of corruption, nepotism and discrimination within institutions and strict adherence to the Constitution and law".

Undoubtedly, the real issue is making Pakistan an egalitarian state as envisaged in Objectives Resolution, which is a substantive part of the Constitution by virtue of Article 2A.