The entire city’s roads seem to have been dug, as WASA launches the project of laying sewage pipes -- all at once 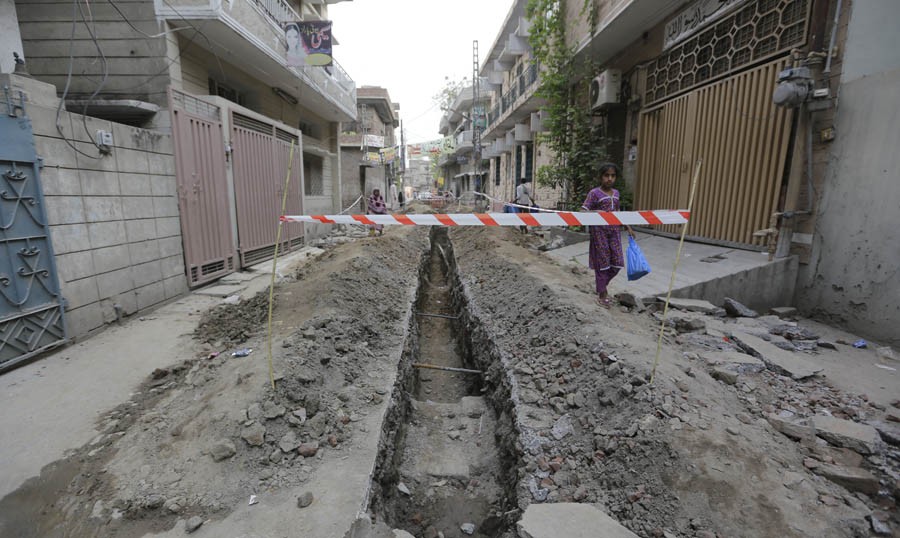 Going around, you commonly meet roads and streets that have been dug at different points. Huge, cemented pipes are also to be seen at the sites, kicking up dust, with the poor labourers at work. Amidst all this, the motorists and pedestrians struggle to make their way through.

Reportedly, these are sewage pipes and clean water supply lines that are being laid under the Lahore Development Project (LDP). As important as the project is, launching it all at the same time throughout the city isn’t a good idea. It is causing great inconvenience to people, especially those in low-lying areas of the city.

At best, they are hoping the trouble shall soon be over and they will finally get relief from the standing waters and choked gutters, not to mention the unavailability of drinking water -- issues they have long faced.

Director, Planning and Evaluation, WASA, Tanvir Ahmad tells TNS that the project has been launched in response to a report by the Institute of Public Opinion Research that said that clean drinking water and improved sewerage system were among the most pressing needs of the people living in these areas.

Ahmad rejects the claims made by the opponents of the project that the LDP is political motivated, "Wasa approves every scheme after third-party validation. The agency first identifies the need of the project.

"Sewage pipes are being laid in the areas where there was no sewerage system in place, or the one that existed had collapsed, the pipes were choked or too narrow to drain the water."

He also speaks of a plan by Wasa whereby the sewers will be cleaned before the start of monsoon.

"Common people doubt the the motives of the authorities, as general elections draw near. They believe the project should have been started earlier on and completed in phases. The government’s political interests have caused inconvenience for the poor citizens."

"Besides, generators shall be installed at all the pumping stations. The task [of installation] shall be completed by April 30 this year."

In reply to a query, the director of Planning and Evaluation, Wasa, says the consumers are being supplied water via 5,600-km long supply lines that connect with 319 tube wells.

An estimated Rs500 million has been allocated for the construction of a new storm water drainage system that goes from Haji Camp to River Ravi through Laxmi Chowk, Macleod Road, Nabha Road, Chauburji, and Sham Nagar.

PML-N UC-24 Coordinator Mohsin Butt says, "In the past, our focus has been on reconstructing the streets, and the drainage system was clearly ignored. As a result, the newly-built streets were also damaged because of the standing waters that had flowed over from the blocked sewage pipes and manholes. We apprised Hamza Shahbaz Sharif of the situation, which was when Wasa sprang into action."

The timing of the project has raised eyebrows. To quote a PTI worker, "Common people doubt the sincerity of the motives of the authorities, as general elections draw near. They believe the project should have been started earlier and completed in phases. The government’s political interests have caused inconvenience for the poor citizens."

The worker further says that there should be coordination between the government departments such as Wasa, PTCL, and SNGPL. "The minute a road or street has been constructed, some civic agency jumps in and starts to dig it for a new installation."

"Under the Safe City Project, pipes are already being laid for CCTV cameras in the city, and many freshly built roads and streets have been dug, says a lawyer of Wasanpura.

The residents of UC-24 complain that many streets have been left uncovered after laying the sewage pipes. They also grumble about the quality of work, and demand an immediate completion of the project.

Interestingly, the laying of pipes at GT Road, which is a very busy road, is immensely slow. You find dust and mud everywhere, apart from traffic snarlups because the motorists can’t find a way to cross it. The locals are said to be catching respiratory problems. There are big schools and a college on the GT Road, near Shozo Laboratory, and the students routinely face difficulty getting there.