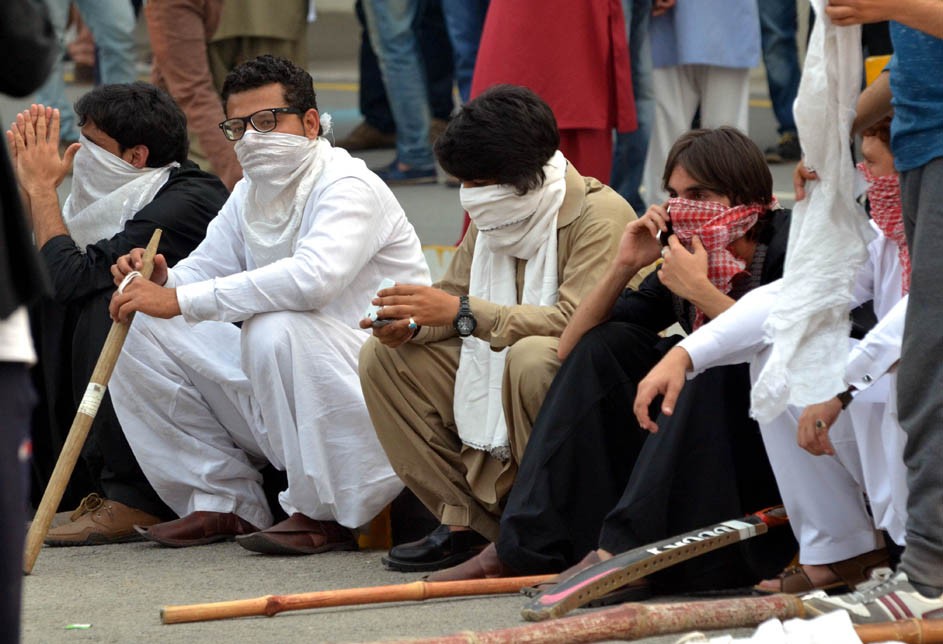 Getting through the security in Punjab University is the same exercise that is typical to most educational institutions these days. There is the usual suspicion and mistrust and questions. But how have things shaped up exactly after the brawl between IJT and Pashtun students?

"The campus looks like the LoC at times due to the beefed up police presence, although this is hardly something new. And while it is psychologically distressing, M Phil students like me do not have the time to keep up. Academic commitments remain top priority," a student sitting on the steps outside the Sociology department tells TNS.

They say, often, they are working in labs and don’t even know what is going on outside until they get a phone call or see something on social media. They just come here to get education, not to get involved in politics.

Inside the Sociology department, a talk about Bhagat Singh’s life and work has just concluded with an appreciation of the need to translate political thought into action.

Even 30 years after Zia’s ban on student politics, the concept of drawing lines between academic and political lives remains just as difficult to fathom.

"Like other ethnic councils within the Punjab University, the Baloch Council is a non-political council. We help students coming from Balochistan adjust to their new lives here and provide them support to make them feel at home," says Shafi Mohammad Mengal, a Master’s student and an adviser to the chairman of Baloch Students Council.

He emphasises the positive contributions the members of his council have made to their communities. His friend, Asad Tariq, who has a Bachelor’s degree in Statistics from the Punjab University, works for a free education initiative in Mastung. During semester breaks, members go back and share information about the academic opportunities available in Lahore, and help prospective students figure out what suits them best.

Read also: All about PU

All ethnic councils are focused on assisting students by guiding them through the admission process, helping them with hostel allotments, and issues they face while settling down.

Mustaqeem Azad, another student at the Punjab University, and a member of the Sindhi Students Council, too, feels that for students coming to Punjab from different provinces, these councils help foster a sense of community and belonging.

"Like other ethnic councils within the Punjab University, the Baloch Council is a non-political council. We help students coming from Balochistan adjust to their new lives here and provide them support to make them feel at home," says Shafi Mohammad Mengal, a Master’s student and an adviser to the chairman of Baloch Students Council.

Jahanzeb Gul, member of the Pashtun Education Development Movement (PEDM) and a student currently pursuing an M. Phil in archaeology builds on Azad’s idea and by pointing out that cultural events play a "crucial role in this regard. Through song and dance, festivity and colourful ethnic wear, we are expressing an aspect of ourselves that is often not shown in the mainstream media."

"After a campaign aimed at racial and ethnic profiling of Pashtuns, what would help integration more? Acquainting people with what really is Pashtun culture dispels myths and stereotypes people in this region have about Pashtuns," asserts Mengal.

Azad brings up the ‘ghunda gardi’ - torture rooms in the hostels, a rigid stance against the intermingling of sexes, extortion money, and canteen rate lists. As an example he narrates an incident that took place in the last week of February this year when a friend of his was threatened by members of this group because he was playing badminton with a female classmate, and the council had to intervene and support Jalaluddin.

He explains that though there are no strict lines with respect to the ethnic composition of these councils -- ethnic Pashtuns will sometimes join the Baloch Council if they are residents of Balochistan for instance - Sindh Council is the most diverse. "It really is a question of what you identify with more," he opines.

"People speak different languages and belong to different communities but we all come together when the need arises. The councils draw support from each other and have good interpersonal relations, and this also extends to ethnic councils in other universities like Mehran Students’ Council at QAU," he adds.

Mir Waheed, a research assistant who has been part of the Punjab University for six years also agrees with Azad in that the councils are a "reaction to Jamiat and its highhandedness".

"Outsiders (non-Punjabis) feel the need to stay together. They are on the defensive," he states.

About half a decade ago before the practice was banned, the IJT, he says, would initially ‘recruit’ students during the admission process by setting up a registration booth parallel to the official one. Students, grateful for the support through the cumbersome and bureaucratic admission procedures, would be morally obliged to deepen their relationships with the members coming to their aid and often ended up within its cadre.

He says that though ethnic student councils have been banned after the recent violence and chaos, "the Jamiat question still remains unanswered. How will the administration control the Jamiat and its activities? They saunter in and out casually, armed at times and recorded on CCTVs. How will peace be ensured?"

"The university administration insists we must identify IJT members and it will take appropriate measures. This is somewhat ridiculous, we cannot go around policing or ‘identifying’ alleged culprits," he says.